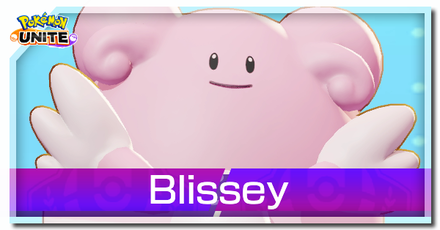 The best guide on how to play Blissey in Pokemon UNITE for Nintendo Switch and Mobile. Check here for the best builds, Held and Battle items, movesets, as well as the latest nerfs, buffs, counters, matchups, and more!

The Best Build for Blissey is the one with the gold crown!

This build utilizes both Egg Bomb and Soff-Boiled for disrupting the enemy team and healing allies, respectively. Since both moves share charges, you will have the chance to use one move in quick succession. This means you can go into the offensive by hurling multiple Egg Bombs at once or rapidly heal you and an ally.

For items, Wise Glasses increases the HP recovery from Soft-Boiled and the damage from Egg Bomb. Since you will be staying close to your allies and helping them farm Wild Pokemon, Exp. Share makes sure you can still get level parity with your allies while also providing extra movement speed for better control on the battlefield. Lastly, Buddy Barrier provides more durability through HP boost and gives extra shields when you activate your Unite Move.

Potion gives Bliseey more survivability while in combat. Moreover, having two Held Items that increase Blissey's HP on top of the Pokemon's innately high HP, means that you can recover more health when using Potion. Alternatively, you can also run Slow Smoke, which gives you crowd control for slowing down opponents so your allies can knock them down. You can also use it as an escape tool when necessary.

Your Boost Emblem loadout should consist of 6 Green Emblems to maximize your moves' effectiveness and 4 White Emblems for additional HP. Equip Emblems that improve Sp. Atk. or HP since the build is centered on maximizing Egg Bomb and Soft-Boiled. You can freely trade Attack, Critical-Hit, and Movement Speed.

This is a full support build focused on buffing and protecting allies using Helping Hand and Safeguard, granting them increased movement speed, increased attack speed, and immunity as they charge enemies. This build is most effective when Blissey is paired with an Attacker or an All-Rounder that can take advantage of the extra durability and boost in attack.

Running Focus Band, Exp. Share, and Buddy Barrier drastically boost Blissey's survivability, allowing you to stay alive longer during fights to provide constant support for your team. In particular, Buddy Barrier works great with Blissey's Unite Move, Bliss Assistance, which can grant a large amount of shields for its allies.

X Speed gives Blissey more mobility to get around the battlefield, allowing you to make quick plays and stay close to your allies. If you want a more straightforward repositioning tool, you can equip Eject Button. Additionally, Slow Smoke can also be considered if you want to add crowd control to your kit.

Your Boost Emblem loadout should consist of 7 Black Emblems for maximum cooldown reduction, 2 White Emblems for a bit of HP, and 1 Emblem of any color. Equip Emblems that improve HP, Defense, or Sp. Def since you'd want to focus on staying alive for as long as possible to support your allies. You can freely trade Attack, Critical-Hit Rate, and Sp. Atk.

This build focuses on making Blissey more of an offensive support Pokemon with Egg Bomb's disabling capabilities. The move's damage is surprisingly high, and its stun and knockback are helpful for crowd control. Safeguard is primarily used to protect Blissey and an ally while you engage in fights.

Potion gives Blissey extra survivability so it can lob eggs and support allies longer. Alternatively, you can run Eject Button for easy disengage from dangerous fights.

Your Boost Emblem loadout should consist of 6 Green Emblems for a decent Sp. Atk boost and 4 White Emblems for additional HP. Equip Emblems that improve Sp. Atk or HP since the build balances offense and support. You can freely trade Attack, Critical-Hit Rate, and Movement Speed.

Since Soft Boiled and Egg Bomb share charges, they are inseparable. For a more passive support playstyle, you can learn Safeguard and Helping Hand. These moves offer AoE buffs for the whole team to take advantage of.

Which Moveset Do You Think is Best For Blissey?

How to Play Blissey

Play Blissey at Top or Bottom

Blissey is a Support Pokemon, so you will have to choose either the top or bottom lane to stay in for the early game. This is due to Blissey not having Moves that can clear Wild Pokemon in the center quickly, but instead using moves that can support ally Pokemon in lanes

Blissey's basic attacks become boosted every few seconds rather than the number of attacks. This will allow Blissey to be able deal some good damage in a single attack, allowing you to trade damage with enemies or steal/secure wild Pokemon. Combined with its Pound Move, Blissey can deal decent early game damage with a single combo. Blissey has also got her heal to get back some lost health after exchanging blows.

Pair up with Allies with High Offense

Being a support Pokemon, Blissey can't dish out a lot of damage by itself. Instead, Blissey can help sustain teammates that can deal damage, making hem stay in the fight much longer. Stay near your damage dealing Pokemon like your Attackers, All-Rounders, and Speedsters, and use your heals and buffs so that they'll have the advantage over the enemy Pokemon and knock 'em out!

Soft-Boiled is a powerful Move that can turn Blissey into a deceptively tanky Pokemon. Not only do you have three charges of heals that can heal your ally, but it will also heal yourself. Enemy Pokemon can be easily baited in by Blissey when at low health then not be able to knock them out quick enough due to its heal.

Stay in the back without Soft-Boiled

If you are running Blissey without Soft-Boiled it is better to keep behind a teammate and not tank at all. Blissey has a lot of health without Soft-Boiled but low Defense, making it difficult to soak up enough damage to be considered tanky. Play it safe and buff your teammates from the backlines!

Use Egg Bomb for Tactical Stuns

Learning Egg Bomb allows Blissey to have a damaging move that can be lobbed from a safe distance. Additionally, the move also provides decent crowd control if you or your team are in a pinch. Use it to set up offensive plays, or just stun enemies in place for a quick getaway.

Stay in the Frontlines with Helping Hand

Helping Hand is one of the strongest Buff move in the game, giving your teammates faster Movement Speed and Attack Speed. If you position correctly during a teamfight, you will be able to buff your entire team and give them an edge over the enemy team. Keep using Helping Hand whenever its off cooldown and make sure you hit as many teammates as you can.

Use Bliss Assistance on your Strongest Ally

Bliss Assistance is a powerful support ability that can not only make an ally durable by giving them shields and partially soak the damage, but will also buff their offense by increasing their Attack and Sp. Attack. Besided buffing a teammate, Blissey will also knock back any Pokemon in your way upon activation, allowing you to disrupt the enemy team. Timing this Unite Move right can save an ally and turn the tides of battle in your teams favor!

Blissey's counters mostly consist of Pokemon that are not dependent on their moves to deal a lot of damage. Moreover, these Pokemon can pressure Blissey's HP fast enough before it can sustain itself.

Even Matchups for Blissey

Blissey is at its best when it gets to stick to its allies and give them support. Most of its even matchups have you either healing HP or buffing your allies so they can knock down safely engage in combat. However, Blissey can still knock opponents down, especially the ones with low Sp. Defense, if you can bombard them with attacks.

Out Heal the Damage

Cleanse Attackers That Relies on Debuffs

Blissey may not be the best damage dealer on the roster, but its strong arsenal of healing and buff moves may turn the tide of battle if used correctly.

In order for us to make the best articles possible, share your corrections, opinions, and thoughts about 「Blissey Guide: Builds and Best Items | Pokemon UNITE」 with us!