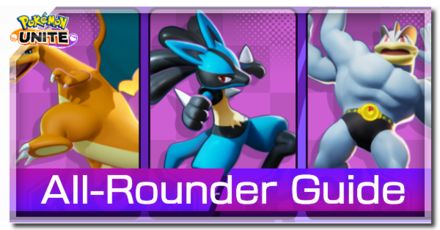 How to Play All-Rounder

Take to the Frontlines when Pushing 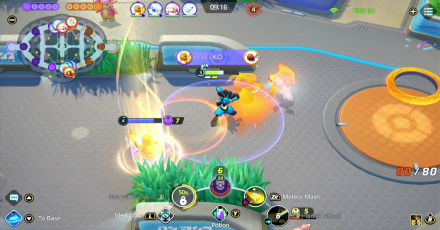 All-Rounders possess good offensive and defensive capabilities, which allow them to take on a more aggressive playstyle. Just like Defender types, you'll always want to take the lead by jumping into the fray and having your teammates follow behind you when a team fight starts. Your good damage output and endurance make you a good wall for your squishier teammates.

While All-Rounders can take a beating, they'll have a difficult time fighting Pokemon that are out of their reach. Attackers can take advantage of their range attacks and moves to whittle down All-Rounders before they get too close. It's highly advised to avoid taking engagements against ranged Pokemon, especially in the early game, and even more so if you don't have a teammate to assist you.

Adapt to Any Situation 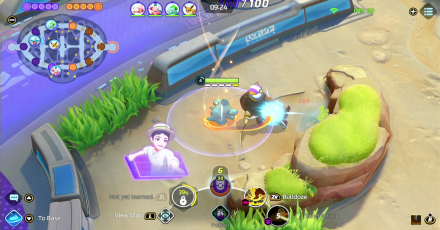 All-Rounders should be able to fill in for a role when the situation demands it. If you feel your team is lacking damage, take up a more offense-oriented approach. If your team is getting wiped out too quickly, switch your playstyle and moveset into something more defensive. Keep tabs on your team's condition and adjust your playstyle accordingly.

Attack the Backlines First in Teamfights 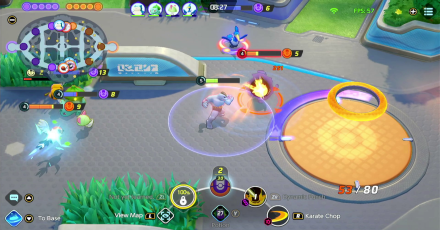 All-Rounders are efficient in diving Pokemon in the backlines and bursting them down. Aim for squishy Attackers or Supporters first since they are most likely positioned behind the rest of their team. Taking out the enemy's damage dealers or supports first is key to winning team fights and securing objectives.

Focus on Leveling Up 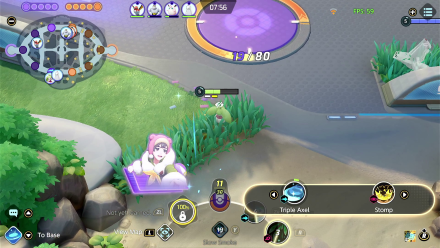 With the exception of Lucario, All-Rounders don't do too well in the early game, becoming powerful only when they reach a certain level. Given this, it's best to focus on leveling up first in the early game before getting aggressive.

How to Level Up Fast: EXP Farming Guide

True to their nature, All-Rounders can practically pursue any lane they want. However, it is advised to only take a lane to fill in for an absent role.

Most All-Rounder moves early on are focused on dealing damage. You can use them to help your teammates farm while also taking the bulk of the damage when a defender is not around. Partnering with an Attacker is good if you want to make offensive plays and can also make fighting Rotom much easier.

Because their endurance is high enough, All-Rounders can help with tank duties like defending goals and guarding allies when contesting Drednaw. They can also protect Supporters while helping them defeat wild Pokemon when an Attacker is absent.
Bottom Lane Guide

Though not as efficient as actual Speedsters, they can farm the jungle just as well and can stay in the fight much longer because of their high endurance. Moreover, having sole access to wild Pokemon in the jungle can net All-Rounders a lot of experience which can grant faster access to powerful moves in the late game.
Jungle Area Guide 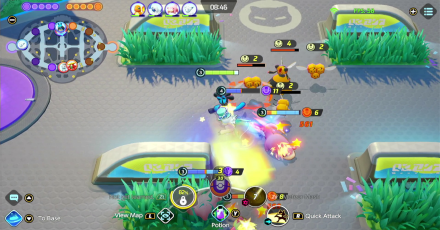 All-Rounders are highly flexible and can take on different kinds of roles when the situation demands it. They can function as primary damage dealers, tanks, supports, or even some combination of the three depending on what moveset you choose for the Pokemon.

Becasue of their well-balanced stats, All-Rounders can counter most Pokemon or are on equal footing with them.

The downside of being able to take on different or multiple roles is that All-Rounders won't excel at any specific role in an impactful manner.

Having to support your team in various ways means you have to know what specific moves in your kit are helpful in certain situations. It is key to know what moves can help dish out damage, keep you alive, or offer support for your teammates.

With the exception of Dragonite, All-Rounders have to be at melee range to attack, putting themselves in a dangerous position. They can also get easily kited by long-ranged Pokemon.

All-Rounders are Pokemon that have a good balance of offense and endurance. They are designed to be independent and capable of filling various roles based on the team's needs.

Why Should You Play All-Rounder?

The All-Rounder role is for players who excel at a more adaptive or flexible playstyle. Instead of focusing on a single role, they aim to offer support by being able to transition between roles - albeit with a reduced capacity - as the game goes on. Generally, All-Rounders are good dealing at with damage and providing some sort of crowd control.

In order for us to make the best articles possible, share your corrections, opinions, and thoughts about 「All-Rounder Guide: How to Play All-Rounders | Pokemon UNITE」 with us!