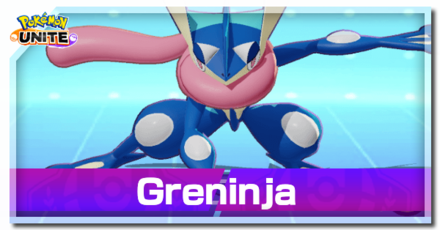 The best guide on how to play Greninja in Pokemon UNITE for Nintendo Switch and Mobile. Check here for the best builds, Held and Battle items, movesets, as well as the latest nerfs, buffs, counters, and more!

The Best Build for Greninja is the one with the gold crown!

This is Greninja's standard attack damage carry build that involves maneuvering around and confusing targets with Double Team, then quickly following up with Water Shuriken while circling them. Note that the illusions created by Double Team will shoot out their own Shurikens, adding more damage. The key to this build is proper positioning, ensuring each shuriken and each standard attack hit the target.

Muscle Band and Scope Lens are your core damage items, giving you ample firepower throughout the game. They also help you secure Wild Pokemon faster so you can get to your move upgrades faster. For defense, Buddy Barrier boosts Greninja's HP, increasing its overall survivability. Additionally, the item works great with your Unite Move, especially once you start using it aggressively.

Eject Button acts as an escape tool for bad situations and a repositioning tool to better land Water Shuriken. If you have a hard time lining up shurikens, you can equip Slow Smoke instead to keep opponents in place.

Your Boost Emblem loadout should consist of 7 Red Emblems for maximum Attack Speed and 4 Emblems of any color. Equip Emblems that improve Attack or Critical-Hit Rate since most of your damage will come from attacks. You can freely trade Sp. Atk. Sp. Def., and Defense.

This is an assassin build centered around bursting down targets with a combination of Smokescreen and Surf. This build makes Greninja play more of a melee Attacker as you bombard your target with attacks while they are confused with Smokescreen.

Muscle Band and Scope Lens help you chip away your targets' HP enough so you will likely knock them down with Surf. Successfully doing so will reset the move's cooldown, allowing you potentially knock down multiple targets in a row. On the other hand, Focus Band provides decent durability and survivability to help you in fights. The item acts as a safety net when you fail to knock down the target.

Eject Button adds more mobility on top of the Dash moves you already have. As an alternative, you can equip Full Heal, which allows you to get immunity from disables as you engage the enemy.

Your Boost Emblem loadout should consist of 6 Brown Emblems for maximum damage and 4 Emblems of any color. Equip Emblems that improve Attack or Critical-Hit Rate since you'll be chipping away your target's HP with your attacks before finishing them off with Surf. You can freely trade Sp. Atk. Sp. Def., and Defense.

This is a balanced build that focuses more on survivability and ranged attacks. Combining Water Shuriken and Smokescreen gives Greninja a ninja-like playstyle that involves sniping down opponents and giving them a hard time targeting you. The build can be used in the Top Lane.

Muscle Band boosts your attack damage and increases your attack speed, enabling you to trade blows with the enemy. The item also synergizes with Water Shuriken, as the move's cooldown is reduced every time you deal ranged damage. Focus Band and Buddy Barrier are your survival tools during the early-game and mid-game as you try to level up and get stronger, ensuring a safe transition to the late game.

Eject Button gives extra mobility, enabling you to escape enemies during the early game and get aggressive once you hit your power spike. X Speed can be an alternative to Eject Button as a mobility tool.

Your Boost Emblem loadout should consist of 6 Brown Emblems for maximum damage and 4 Emblems of any color. Equip Emblems that improve Attack or Critical-Hit Rate since you need as much damage as you can for the build. You can freely trade Sp. Atk. Sp. Def., and Defense.

Greninja's effectiveness lies on how well you've mastered the Pokemon, not necessarily on which moveset you chose. Any move combination will do as long as you know how they work.

Which Moveset Do You Think is Best for Greninja?

How to Play Greninja

Be Aware of Your Positioning

Positioning is everything when it comes to using Greninja effectively. Keeping aware of Greninja's position in relation to the opponents will help set up smoother KOs, and snowball the game in your teams favor.

Greninja reaches its peak offensive potential at Level 7 when it learns Surf or Water Shuriken. Avoid engaging in team fights early on to focus on farming Wild Pokemon.

Take the Jungle for Safer and Faster Farm

The most efficient and safest way to get levels is by taking the jungler role. Greninja has enough mobility and damage to clear the jungle camps quickly.

One of Greninja's moveset gives it its trademark elusiveness, allowing you to make clever plays. Although both moves are Dash moves, each has their use in specific scenarios.

The illusions created from Double Team mimics your actions in the game. If you use Surf or Water Shuriken, the illusions will do the same. Use this unique mechanic to confuse enemies and force them to guess the real one. Remember that the illusions also deal small damage when they attack.

Utilize the Stealth and Vision Obstruction from Smokescreen

Using Smokescreen turns Greninja invisible for a while and obstructs the vision of opponents who are caught inside it. Both effects are useful for surprising your targets or getting close to them.

You gain the Unstoppable status effect for a short duration when you use Double Team or Smokescreen, allowing you to become immune to hindrances for that time window. With proper timing, you can completely avoid certain moves like Flare Blitz with this mechanic.

Switch Between Ranged and Melee Attacks

By default, Greninja is a ranged Pokemon, but if it attacks at close range, it performs melee attacks. Both attacks have special effects that give Greninja some flexibility. Switching between ranged and melee attacks is an important mechanic to utilize Greninja.

Greninja's ranged attacks reduce the cooldown of Bubble, Water Shuriken, or Surf. Use ranged attacks if your moves are still on cooldown to hasten the process and to chip away your targets' HP from a safe distance.

Use Melee Attacks to Finish Off Targets

Greninja's melee attacks deal increased damage the lower the target's HP is, allowing you to burst them down quickly. Use Double Team, Smokescreen, or Waterburst Shuriken to get close to your targets, then keep hitting them with melee attacks until they get knocked out.

Moreover, melee attacks are great for setting up Surf and triggering its cooldown reset.

Your passive ability, Torrent, increases your Attack and movement speed when your HP is at half or below. You can turn things around even at low HP, but you have to be extremely cautious as you might just end up getting knocked down. You have to know when to continue fighting and when to retreat.

As the team's carry, you'll be setting the tempo of the game depending on how active you are in the map. You need to be the one making plays for your team to allow for smoother transitions between each phase of the game.

Greninja excels in a 1v1 fights since due to its damage and trickery. Roam around the map and hunt targets if you can to give your team space and time to reach their power spikes.

You should also focus on securing objectives like Regieleki for your team, whether it's taking them on your own or stealing them from enemies. You can use Surf and/or Waterburst Shuriken to steal or secure objectives.

Steal Farm from the Enemy

If you're not hunting targets or securing objectives, you should be stealing farm from your enemy, particularly in their jungle. Use Surf or Water Shuriken to farm wild Pokemon as fast as possible. If things go awry, use Smokescreen or Double Team to quickly escape.

This set of combos takes advantage of the illusions generated by Double Team to deal extra damage. Since the illusions will imitate Greninja's actions, you will be able to duplicate your moves when you use them. The combos are great for bursting down single targets.

This set of combos uses Waterburst Shuriken to engage the fight and bring the target's HP low enough for your other moves to finish the combo.

Greninja relies on its high mobility moves to maneuver around opponents to get quick hits and, eventually, take them down with a Surf or Water Shuriken. Because of its low endurance, Greninja's lethality drastically falls if it is unable to move or its combos are disrupted.

Even Matchups for Greninja

Greninja makes up for its lack of endurance by relying on ninja tactics to make it hard for opponents to target it. Aside from being great dash moves, Double Team and Smokescreen give Greninja the edge it needs for facing even a Pokemon that is stronger than it.

Aim for a Quick Knockdown

These matchups are generally easy for Greninja to face, provided that you have mastered Greninja's high skill requirement. Proper positioning and aim are still required to win a fight against these Pokemon.

In order for us to make the best articles possible, share your corrections, opinions, and thoughts about 「Greninja Guide: Builds and Best Items | Pokemon UNITE」 with us!