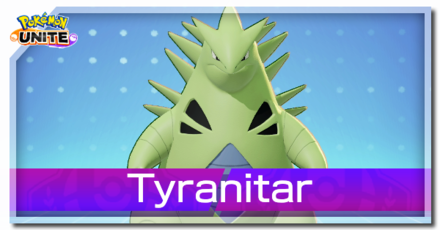 The best guide on how to play Tyranitar in Pokemon UNITE for Nintendo Switch and Mobile. Check here for the best builds, Held and Battle items, movesets, as well as the latest nerfs, buffs, counters, matchups, and more!

This build is centered on improving Dark Pulse's damage and effect using Ancient Power. Remember to use Ancient Power first before Dark Pulse to trigger the additional effects.

Muscle Band increases your damage and attack speed to help you in the early game. Weakness Policy provides HP and damage, and works well with Ancient Power's shields, boosting your Attack stat as you soak damage. Focus Band boosts your static defenses and gives you a survivability tool as you charge enemies. However, you can also equip Buddy Barrier as a substitute for Focus Band.

X Speed works well with Ancient Power since it prevents you from slowing down while charging.

Your Boost Emblem loadout should consist of 6 Brown Emblems for maximum damage and 4 White Emblems for additional HP. Equip Emblems that improve Attack or HP since you need to balance damage and durability. You can freely trade Sp. Atk and Movement Speed.

This is a defensive build focusing on providing AoE damage and crowd control during teamfights via Stone Edge, Sand Tomb, and Sand Stream.

Weakness Policy is your only damage item, increasing your Attack stat as you take damage. Focus Band and Buddy Barrier provide the durability and survivability you need as you initiate fights.

Slow Smoke gives you another crowd control tool to work with and synergizes well with your moves, allowing you to keep enemies inside Sand Tomb longer. However, you can equip Eject Button or X Speed for better mobility to set up your moves.

Your Boost Emblem loadout should consist of 4 Blue and Purple Emblems for better defenses and 2 White Emblems for a bit of HP. Equip Emblems that improve Sp. Def, Defense, or HP since you'll be initiating fights and need to be as durable as possible. You can freely trade Sp. Atk, Critical-Hit Rate, and Movement Speed.

This is a jungle build centered on maximizing Tyranitar's attack damage during Tyrannical Rampage in the hopes of triggering its instant knockout effect. Dark Pulse and Ancient Power will act as complementary tools to aid in executing the build.

Muscle Band and Weakness Policy greatly improves your attacks during Tyrannical Rampage by boosting your Attack stat and Attack Speed. However, if you want to concentrate on critical-hits, replace Weakness Policy with Scope Lens. Energy Amplifier increases your Unite Move recharge rate, gives you a slight move cooldown reduction, and adds another layer of damage when you activate Tyrannical Rampage.

Your Boost Emblem loadout should consist of 6 Brown Emblems for maximum damage and 4 White Emblems for additional HP. Equip Emblems that improve Attack or Critical-Hit Rate since you need to deal as much damage as you can with your attacks. You can freely trade Sp. Atk and Movement Speed.

If you want an aggressive playstyle, choose Dark Pulse and Ancient Power for a simpler and quicker combo. If you want a teamfight-oriented playstyle, learn Stone Edge and Sand Tomb for the area damage and crowd control effects.

Which Moveset Do You Think Is Best For Tyranitar?

How to Play Tyranitar

Change your Playstyle for Each Passive Ability

Since your passive ability changes as you evolve, you also need to change how you play for each evolution stage to make the most out of them. All of Tyranitar's moves have a unique effect and mechanic that makes them more effective. Read their descriptions thoroughly to understand their effects and mechanics so you can fully utilize them in games.

Get to Level 9 Quickly

Tyranitar's final evolution happens when you reach level 9. This will be the time that Tyranitar will get its power-spike as it will learn its next set of move upgrades, making Tyranitar a late-game Pokemon. It is important that you seek out and farm all the Wild Pokemon during the early game.

The safest and most efficient way to reach level 9 quickly is by taking the jungler role for the team, allowing you to get all exp. in the central area. However, you still do need to be careful and not be too aggressive when you rotate to lanes to help your allies. Your main priority should still be to reach level 9 as fast as possible.

Since you are racing towards level 9, getting the first Regieleki spawn is top priority. When captured, it will give you and your allies extra EXP to reach higher levels and puts pressure on the enemy's top lane.

Plan Ahead with Your Damaging Move

Since you will depend on Rock Polish for the whole early to mid-game, picking either Dark Pulse or Stone Edge as your move upgrade will be key in how Tyranitar will be able to act once it fully evolves. Both moves offer similar, melee-ranged damage, but have key differences that can be beneficial in certain situations.

Get More Damage with Stone Edge

Because Tryanitar stands in place when it uses the move, Stone Edge is not as versatile compared to Dark Pulse. However, once activated, you will be able to use the move an additional two times with each subsequent activation having an increased radius, giving it a higher damage potential. Combine this with Sand Stream, and you will be able to continuously trigger the sand storm as you activate Stone Edge multiple times.

Get Stuns and Mobility with Dark Pulse

Dark Pulse offers more maneuverability since you can still control Tyranitar while the move is in effect. This also gives you a chance to increase the size of the area of effect and hit more enemies.

Like Bite, Dark Pulse can stun targets when their HP reaches a certain threshold. This gives you a bit more time to deal damage to opponents once you get in range.

Once Tyranitar fully evolves, it will have access to its premier move, Sand Stream. The passive ability allows you to generate a sand storm around Tyranitar that will deal continuous damage to all enemies within it. It will trigger every time you use a move. Fortunately, Tyranitar will also learn its next move upgrade together with Sand Stream, which allows you to get more value out of the activation with stuns and an increase in mobility.

Sand Tomb covers a large area with a sand storm. Combine this with Sand Stream, and you will get a zone that will surely give opponents a hard time getting out without a scratch. Moreover, the move allows Tyranitar to quickly jump to the targeted area, making it a great initiating move that can pressure grouped enemies.

Get Consistent Triggers with Ancient Power

Ancient Power gives Tyranitar more flexibility when you want to get consistent Sand Stream triggers. Note that the move's cooldown will continue as you trigger its second activation. Charging the move will allow Tyranitar to have an increase in movement speed and hindrance resistance, making it great for pushing through the enemy team and getting a good position before creating a sand storm.

Once Tyranitar fully evolves and learns all of its moves, it will be more capable of facing the opposing team head-on. Most of its moves will provide the Pokemon with extra defenses if chained properly, making the front lines the best place to put Tyranitar.

Because of Tyranitar's Sand Stream ability covering a large area, it is great for pushing lanes, especially if it is supported properly. Additionally, Sand Stream is also effective for preventing opponents from scoring thanks to Sand Stream. Once triggered, opponents will have a hard time scoring goals because of the continuous damage the sand storm deals.

Lead the Charge Against Objectives

While Tyranitar is more than capable of taking on objectives solo, it is still best to lead your team when securing objectives. Whether it's taking Regieleki or pushing lanes, staying in front and making space for your team to set up their moves should be your gameplay.

Make sure to set up all your moves first before activating Tyrannical Rampage. This way, you can focus on spamming attacks while also having Sand Stream in effect. Note that, while Tyrannical Rampage is active, you will still be able to use your moves. Use them in conjunction with Standard Attacks to get Sand Stream triggers and maximize your damage output!

Tyrannical Rampage has a special effect where you can instantly knock down an opponent if their HP reaches a certain threshold. Once activated, opposing Pokemon near you will have bars in their HP that indicates the amount to trigger the move's effect. To get the best value, make sure to whittle down the enemy's HP first with moves and Sand Stream.

Tyranitar has high endurance and damage, making it the ideal Pokemon. The only way to counter it is by outplaying it and dealing more damage.

These Pokemon have certain tricks to outplay Tyranitar. Utilize Tyranitar's moves and ability to prevent or avoid these tricks and get the upper hand.

Prevent Them from Triggering their Special Mechanics

Get a Level Advantage

With its high defenses and hard hitting moves, Tyranitar is capable of gunning down these Pokemon with ease - assuming it gets close enough. Take advantage of the mobility you get from Sand Tomb or Ancient Power to get close to them and get in constant Sand Stream hits.

Pressure Until They Fall

In order for us to make the best articles possible, share your corrections, opinions, and thoughts about 「Tyranitar Guide: Builds and Best Items | Pokemon UNITE」 with us!