Slow Smoke Effect and How to Get | Pokemon UNITE 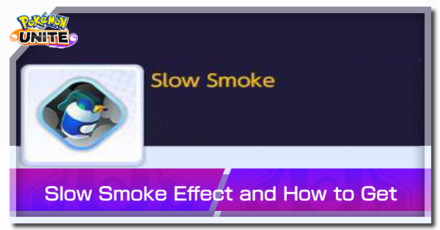 The effect duration of Slow Smoke is 2 seconds. Enemies caught in its area-of-effect will have their movement speed greatly reduced. 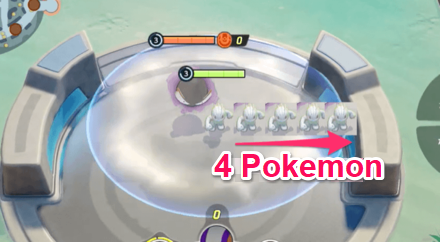 The radius of Slow Smoke is around three to four Pokemon. If the opponent is not within the range at the moment of activation, they will not be slowed, so you need to get close enough to them before using it.

Slow Smoke's effect works with Wild Pokemon. However, Instead of slowing them down, they will stop moving entirely and will drop aggro if you don't get close. Take note that slowing down the movement speed of Wild Pokemon has little merit, so it is best to use it on your opponents instead.

How to Get Slow Smoke

Slow Smoke is great for Pokemon who do not necessarily rely on Eject Button to get in but also want to stay in the fray, such as Crustle and Sylveon. It's also a useful tool for melee-type Pokemon to keep enemies in place and within striking distance for as long as possible.

Crustle in particular can use Slow Smoke as a follow-up to Stealth Rock, making sure that the enemy stays inside its area of effect for as long as possible to maximize the damage. This is also applicable to Rubble Rouser, making it hard for enemies to escape. For the best result, use Rubble Rouser -> Stealth Rock -> Slow Smoke, and stay on top of the enemies to do the most damage. Sylveon, on the other hand, can benefit from Slow Smoke by getting targets within range when using Moves such as Mystical Fire and Draining Kiss.

How to Use Slow Smoke

Escape from a Losing Fight

You can use Slow Smoke to slow down the opponent's movement speed when they are chasing you. This is great for running away from Pokemon that have melee attacks.

The slow effect can also hinder ranged attackers from reaching you, but to a lesser extent. Though it does give you a bit more time to maneuver around them, it does not guarantee that you will get out of their range to avoid their attacks.

You can also use Slow Smoke for offensive plays by taking advantage of its slow effect to keep the distance between you and your opponent close. This ensures that melee attackers in particular can more effectively deal damage to enemies by keeping them within your attack range. Be sure that the opponent is within the smoke area for the slow to take effect.

The duration of Slow Smoke's effect confirms how many seconds the movement speed slows down by using the item while being chased by the opponent.

As a result of testing, it was found that Slow Smoke's effect will last for 2 seconds after being activated on the opponent caught within the range.

In order for us to make the best articles possible, share your corrections, opinions, and thoughts about 「Slow Smoke Effect and How to Get | Pokemon UNITE」 with us!