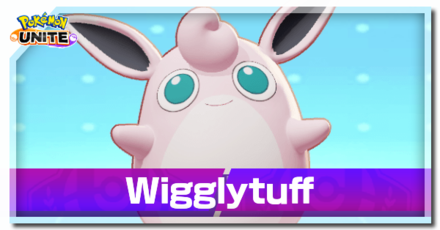 The best guide on how to play Wigglytuff in Pokemon UNITE for Nintendo Switch and Mobile. Check here for the best builds, Held and Battle items, movesets, as well as the latest nerfs, buffs, counters, matchups, and more!

The Best Build for Wigglytuff is the one with the gold crown!

This is a support build focused on disrupting and stunning enemies using Sing and Dazzling Gleam, setting up knockdowns for your team to take advantage of.

Since you will be focusing on defensive plays, Exp. Share is a great item to carry for helping your teammates level up faster. Additionally, the extra durability and movement speed are essential for getting in position with Sing. Focus Band boosts your defenses and provides survivability, enabling you to charge targets fearlessly. Lastly, Buddy Barrier synergizes well with your Unite Move, granting bonus protection on top of the shielding you get from your Unite Move.

Eject Button is your repositioning tool to either chase targets or escape from them.

Your Boost Emblem loadout should consist of 4 Blue and Purple Emblems for additional defenses and 2 White Emblems for a bit of HP. Equip Emblems that improve HP, Defense, or Sp. Def since you need to be as durable as possible when charging in and setting up kills with Sing and Dazzling Gleam. You can freely trade Attack, Critical-Hit, and Movement Speed.

This build emphasizes dealing damage using Rollout and Double Slap. If you can ensure that your target can hit a wall when using Rollout, you can continuously deal damage due to Rollout's cooldown refresh effect.

Choice Specs and Wise Glasses amplifies your damage output, particularly for Double Slap. Focus Band is mainly for extra survivability when you use your Unite Move to stay alive. You can substitute Focus Band with Buddy Barrier, sacrificing team fight for better defenses.

Eject Button adds more mobility on top of Rollout and can be used offensively or defensively.

Your Boost Emblem loadout should consist of 6 Green Emblems to maximize your moves' damage and 4 Emblems of any color. Equip Emblems that improve Sp. Atk since you'd want to deal as much damage as you can with your moves. You can freely trade Attack, Critical-Hit Rate, and Movement Speed.

This is a well-balanced build centered around charging and disabling enemies using Sing and following up with Double Slap, ensuring that enemies receive Double Slap's full damage.

Choice Specs, Focus Band, and Buddy Barrier provide durability, survivability, and damage as you charge enemies with Sing and Double Slap. Buddy Barrier also provides a better team fight when you use your Unite Move.

Eject Button is a must-have battle item for this build, giving you a tool to better set up for your team.

Your Boost Emblem loadout should consist of 6 Green Emblems to maximize your moves' damage and 4 White Emblems for additional HP. Equip Emblems that improve Sp. Atk or HP since you'd want to balance offense and defense for the build. You can freely trade Attack, Critical-Hit Rate, and Movement Speed.

Dazzling Gleam and Sing enable Wigglytuff to be both an offensive and support powerhouse. You can learn Rollout instead if you prefer a more direct way of dealing damage and disabling opponents. Since there is no significant difference one move has on the other, you can freely choose over Double Slap and Dazzling Gleam for your damaging move.

Which Moveset Do You Think is Best For Wigglytuff?

During the early game, it is important to aid your allies in farming Wild Pokemon and help them reach high levels. Pound will be a useful tool for providing consistent damage while also ensuring you get the last hit while farming. Also, it is best to avoid overextending and getting too aggressive as Defense Curl's cooldown is a bit long for you to use consistently.

Unlike other Supporters in the roster, Wigglytuff's kit does not offer the traditional heals and shields. Instead, it utilizes damage and disables to generate an advantage for the team. Although its damage output is not up to par with other moves in the roster, they are enough to pressure opponents and open up easy knockdowns if you get to chain them properly.

Sing is a core part of Wigglytuff's support game. The Slow and Defense Down effects are strong, but note that they will go away as soon as the move ends. So, it is best to work with your ally or a jungler to set them up and knock them down. To create an early lead, use Sing as much as you can and take advantage of the bonus movement speed.

Wigglytuff's other move, Rollout, offers great disruption opportunities while giving Wigglytuff protection and mobility. Use it to knock up and stun multiple enemies in your path during a clash. Combining it with a Double Slap or Dazzling Gleam gives you a nice combo that also sets up enemies for your allies to take advantage. Rollout also provides decent shields and makes Wigglytuff unstoppable for a short time, allowing it to easily disengage from fights when needed.

If the enemy team has its own support Pokemon, it is best to ignore them and focus on supporting your team. Blissey may prove difficult since it can negate disables with Safeguard. Eldegoss, on the other hand, can sustain itself with heals while it fights back with Pollen Puff explosions. Needless to say, squaring off against support Pokemon will be too much of a grind. It is best to let your allies focus down their support Pokemon before you can continue disrupting the enemy team.

Although Wigglytuff is sturdy enough to endure multiple hits while in a skirmish, getting caught in a fight between an All-Rounder can be too difficult to handle. Pokemon like Aegislash and Lucario have great burst capabilities, which can fight through Wigglytuff's disables if you brawl with them for too long. Additionally, a Pokemon like Machamp can learn the move Submission which makes it immune to hindrances, thus negating your disabling moves. Additionally, the Pokemon is tough enough to sustain Wigglytuff's damaging moves.

Bouncing off walls also resets the cooldown of Double Slap or Dazzling Gleam. This interaction allows you to chain multiple hits together and deal enough damage to pressure opponents. For the best value, make sure to target low HP Pokemon like Attackers to secure a knockdown.

Use Starlight Recital to Protect and Save Allies

Wigglytuff's Unite move, Starlight Recital, provides shields and cleanses the debuffs of all your allies. It is no good at turning the tide if there's no damage accompanying it, so use it in situations where you and your allies will definitely lose if they die, like during a Rayquaza clash.

Pokemon that can counter Wigglytuff's disables or prevent it from setting them up are the best Pokemon to use against it.

Wigglytuff can take on these Pokemon if it can set up Sing or Rollout properly, then follow up with Double Slap or Dazzling Gleam.

Easy matchups are Pokemon that are susceptible to getting disabled and bursted down.

Head Straight for Them

In order for us to make the best articles possible, share your corrections, opinions, and thoughts about 「Wigglytuff Guide: Builds and Best Items | Pokemon UNITE」 with us!