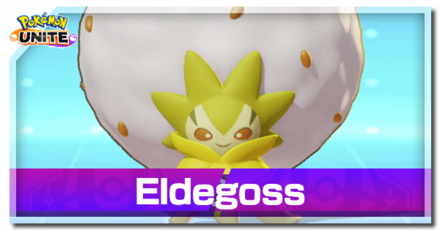 The best guide on how to play Eldegoss in Pokemon UNITE for Nintendo Switch and Mobile. Check here for the best builds, Held and Battle items, movesets, as well as the latest nerfs, buffs, counters, matchups, and more!

The Best Build for Eldegoss is the one with the gold crown!

This build centers around supporting allies through healing and shielding using Pollen Puff and Cotton Guard, keeping them alive as long as possible, especially during team fights. You can use Pollen Puff aggressively by casting it on a melee ally when they charge enemies or cast it on yourself by throwing it on the ground first and then running inside the radius. Your gameplay should consist of staying back from the fight and constantly activating your support moves to aid your teammates. The build also enhances Eldegoss' damage by improving its ranged damage from Standard Attacks. And, since Eldegoss' Boosted Attacks inflicts slow, you will be able to hinder opponents while dealing a lot of damage.

Both Wise Glasses and Choice Specs significantly increase Eledegoss's Special Attack stat, which will increase the damage and healing and Polen Puff deals. Muscle Band increases Eldegoss' Standard Attack speed for consistent damage and slows. It also adds more damage to Eldegoss' Standard Attacks. Since you will mostly take the position at the back line of the fight, the continuous damage you deal from afar will pile up. Depending on your team composition, you may replace one of your Special Attack items in favor of Buddy Barrier, which provides durability and survivability so you can keep supporting your allies.

Your Boost Emblem loadout should consist of 7 Red Emblems for more Standard Attac speed, and 3 Black Emblems for a bit of cooldown reduction for Eldegoss' moves. Equip Emblems that improve Sp. Atk since you'd want to maximize your moves' healing and damage and HP to increase Eldegoss' durability. You can freely trade Critical-Hit Rate, Movement Speed, Defense, and Sp. Def.

This build utilizes the movement speed buff from Leaf Tornado to open opportunities for you and your allies to chase your targets or escape losing fights. Cotton Guard gives extra protection as you charge toward opponents. The key to this build is knowing when to get aggressive and when to play passively.

Your Boost Emblem loadout should consist of 6 Green Emblems for maximum healing and damage, and 4 Emblems any color. Equip Emblems that improve Sp. Atk since the build is just an aggressive variation of the Healer Build. You can freely trade Attack, Critical-Hit Rate, Movement Speed, Defense, and Sp. Def.

This build maximizes Eldegoss' offense through Leaf Tornado and Cotton Spore. Instead of staying behind the lines, this build allows you to initiate fights using Cotton Spore's disabling effect and increase in speed, then follow up with Standard Attacks or escape when needed. Once the effect ends, use Leaf Tornado to weaken your opponent further. The best way to use this build is to activate it near walls bordering your opponents' enemy lanes. Considering your moves and your standard attacks can blast through walls, this prevents your opponents from countering you (save from dash moves) and allows you to deal damage continuously.

For items Wise Glasses and Choice Specs collectively boost your damage output. If you want to put all your focus on offense, you can substitute Focus Band with Sp. Atk. Specs, provided you have allies willing to support you while you stack bonuses.

Eject Button gives Eldegoss a quick and easy way to disengage from fights when it needs to. You can also consider running X Attack to further amplifying your damage output.

Your Boost Emblem loadout should consist of 6 Green Emblems for maximum damge and 4 White Emblems for additional HP. Equip Emblems that improve Sp. Atk or HP since you'll be initiating fights for the build. You can freely trade Attack, Critical-Hit Rate, and Movement Speed.

This moveset gives you a way to provide both shields and heals for your teammates. This puts Eldegoss' at the back of the fight as it constantly generates advantage for the team.

Which Moveset Do You Think is Best for Eldegoss?

How to Play Eldegoss

Be Aware of your Positioning 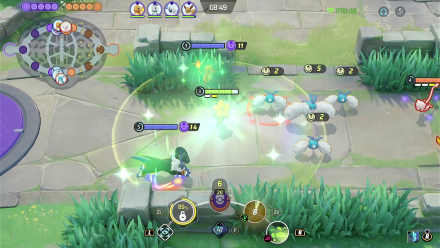 Since Eldegoss is a Support Pokemon, you will have to play it passively and aid your allies if you want to be effective in combat. The trick to fully utilizing Eldegoss' abilities lies in proper positioning and awareness at all times. Knowing when to stay back or get closer to the fight is paramount as this enables you to keep your allies topped off with shields, heals, or movement speed bonuses. Proper positioning also allows you to punish the opposing team with slows and long-range attacks that deal consistent damage that can pile up if left uncontested.

Stick to Allies that Deal Damage

Eldegoss' damage is lackluster if it is alone, so you will need to stick with allies that can compensate. You can't deal much damage yourself, but you can help Pokemon that can deal damage stay alive! Your heals, shields, and movement speed buffs will give them the edge they need to get ahead of the enemy.

Know Which Damaging Move to Pick 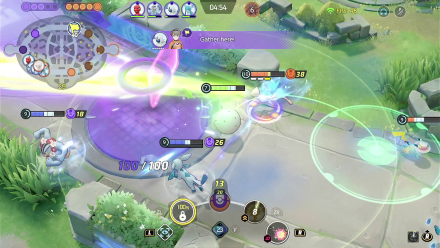 Eldegoss will get its offense move upgrade when it reaches level 4. From here, Eldegoss' offensive capabilities improve, but the damage you get out of them is far from the high-caliber strikes found in Attacker Pokemon. Their strengths will lie in their utility and how you use them to benefit the whole team.

Get Pollen Puff for Continous Heal

Pollen Puff is a flexible move that gives you consistent healing, allowing you to keep yourself and your teammates alive for much longer in fights. Additionally, the move can deal AoE damage if more than one enemy is close enough to the blast radius.

Although, compared to Leaf Tornado that gets the effect immediately, Pollen Puff has a delay before it detonates, so be sure to take note of its activation time to avoid misses.

Learning Leaf Tornado allows you to support your team by giving them a boost in movement speed when they step into the affected area. This is great for giving Defenders or Attackers a way to get ahead in position. It is also a good disengage tool if you need to escape from a losing fight.

Compared to Pollen Puff, Leaf Tornado is more straightforward and can be used as a standard, long-range, damaging move with an extra effect. 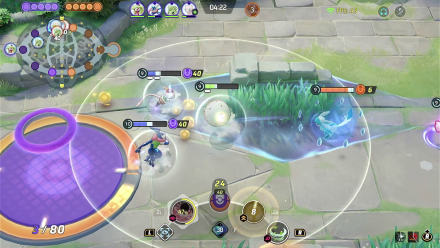 Eldegoss strength comes from its ability to support its teammates. So, you will want to lane with someone in the Top or Bottom paths and take advantage of your support moveset. Though both moves are decent choices, they are fundamentally different and have distinct effects that can help you realize the playstyle you want Eldegoss to have.

Get Cotton Guard for AoE Shields

Cotton Guard gives you and your teammates a decent amount of shields. It is a straightforward support move that can increase your team's survivability during crucial fights. Outside of combat, the shields produced by the move are converted into HP if it does not get depleted, making it a great utility move you can activate all the time!

Get Cotton Spore for AoE Damage

Cotton Spore is an offense-focused, AoE move that has Eldegoss deal damage within a wide area. The move turns Eldegoss into aggressive support, which can contribute to the overall damage output of the team. Moreover, the stun caused by the explosion can open up opponents for your allies to follow through with attacks!

Stay Close to Your Allies During Clashes

Since you will spend most of your time supporting your allies during team clashes, it is best to stick to high-endurance Pokemon like Defenders or All-Rounders. You will want to be near them and keep them alive as long as possible so that they can maintain front-line aggression when pushing lanes.

Save Cotton Cloud Crash for Teamfights

Cotton Cloud Crass is one of your most powerful tools, helping you survive longer, disable enemy Pokemon, and heal your teammates. Make sure to save it for team fights to make get the most value out of the move. It also works as a great counter to any AoE Unite Move your opponent's deal as you can recover lost HP in an instant.

Eldegoss's defenses are abysmal, but its healing does tend to let it stay alive for much longer. However, a quick damage burst will either force Eldegoss to protect itself or completely back off. With that in mind, any Pokemon that can deal quick bursts of damage will definitely work against it.

Even Matchups for Eldegoss

Pairing up with hard-hitters like Cinderace and providing them with constant healing and shielding is the best way for Eldegoss to get the upper hand against these Pokemon.

Heal Through Their Damage

Easy matchups are Pokemon whose damage are easily mitigated by Eldegoss shealing and healing.

Play Around its Moves

In order for us to make the best articles possible, share your corrections, opinions, and thoughts about 「Eldegoss Guide: Builds and Best Items | Pokemon UNITE」 with us!