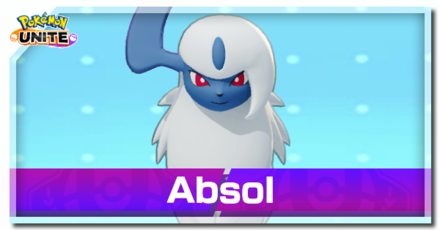 The best guide on how to play Absol in Pokemon UNITE for Nintendo Switch and Mobile. Check here for the best builds, Held and Battle items, movesets, as well as the latest nerfs, buffs, counters, and more!

The Best Build for Absol is the one with the gold crown!

This is build is centered around pouncing targets with Night Slash, then following up with Psycho Cut and a couple of basic attacks for a consistent stream of critical damage. Use Night Slash's second activation to finish them off. The critical-hit rate increase you get from the Night Slash's second activation is based on the target's missing health, so it's crucial to deplete the target's HP first before lunging. You need to be extremely cautious when diving targets since you won't have any defensive items.

Muscle Band, Scope Lens, and Razor Claw provide all the things you need to quickly take down your targets, attack speed, damage, critical-hit rate, and critical-hit damage. Be careful, since you are trading defense and survivability for extra damage, be sure to only engage a target if you thin

Eject Button is crucial for this build, acting as your only means of escaping should things go bad.

Your Boost Emblem loadout should consist of 6 Brown Emblems for maximum Attack stat, 3 Red Emblems for more Attack Speed, and 1 Emblem of any color. Equip Emblems that improve Critical-Hit Rate or Attack since this is a full-offense build. You can freely trade Sp. Atk, Movement speed, Sp. Def, and Defense.

This is a mobility build centered on isolating a target with Sucker Punch, and bursting it down using Night Slash. Use the Blink Slash Combo as your primary combo for taking down targets.

Scope Lens and Razor Claw boost your critical-hit rate and damage since it's your primary source of damage. Buddy Barrier gives you decent durability via increased HP, and provides survivability after using your Unite Move.

Eject Button adds more mobility on top of your moves, allowing you to reposition and isolate a target.

Your Boost Emblem loadout should consist of 6 Brown Emblems for maximum Attack stat and 4 White Emblems for added HP. Equip Emblems that improve Critical-Hit Rate or Attack since the build is damage oriented. You can freely trade Sp. Atk, Movement speed, Sp. Def, and Defense.

This is another full-offense build but with emphasis on scoring and laning. Night Slash and Psycho Cut are the recommended moves for the build due to its huge damage potential, but you can choose whatever moveset you want.

Attack Weight, Scope Lens, and Razor Claw all contribute in amplifying your critical-hit damage and have great synergy with each other.

Eject Button helps you chase enemies as well as escape them. However, you can also equip X Speed for a similar effect.

Your Boost Emblem loadout should consist of 6 Brown Emblems for maximum Attack stat and 4 White Emblems for added HP. Equip Emblems that improve Critical-Hit Rate or Attack since the build focuses on maximizing your critical-hit damage. You can freely trade Sp. Atk, Movement speed, Sp. Def, and Defense.

This build makes use of Pursuit's cooldown reduction effect when attacking a target from behind, and Psycho Cut's slow and damage increase. You'll be using the Cut to Pursuit Combo as your core combo.

Muscle Band and Scope Lens are standard damage item duo, increasing your attack speed and damage. Buddy Barrier increases your durability through an HP boost, and gives survivability after you use your Unite Move.

Eject Button is your default battle item, giving you an offensive and defensive tool. However, if want more damage on top of Psycho Cut's damage increase, equip X Attack instead.

Your Boost Emblem loadout should consist of 6 Brown Emblems for maximum Attack stat, 3 Red Emblems for more Attack Speed, and 1 Emblem of any color. Equip Emblems that improve Critical-Hit Rate or Attack since this is similar to the Blink-Striker Build. You can freely trade Sp. Atk, Movement speed, Sp. Def, and Defense.

Absol's gameplay is centered around critical hits to take out enemy Pokemon quickly. For a more assassin-like playstyle, you can learn Pursuit to make aiming more convenient. Combining that with Sucker Punch allows you to stick to your targets easily. Otherwise, you can stick to Psycho Cut if your build takes advantage of quick Standard Attacks.

Which Moveset Do You Think Is Best For Absol?

How to Play Absol

Get Aggressive Early On

Absol is strong even early on thanks to its high critical-hit rate and damage. Get aggressive in the early game to pressure your enemies and force them to be defensive.

Absol is best played as a jungler so it can level up faster and learn its primary moveset. Make sure to communicate with your team that you'll be going to the jungle before the match begins to avoid confusion and tensions.

You can set the tempo of the game if you can keep hunting targets. This allows you to create space for your team to level up and take objectives while crippling the enemy team. It's also the best way for Absol to snowball and take over the game.

If you encounter an opponent that's far away from its team, aim for them and burst them down. You'll have more chances of winning in this situation since Absol excels in 1v1 fights.

Approach from the Side or Behind or In Grass

When hunting enemies or during teamfights, it's best to approach your target from the side, behind, or grass. This allows you to avoid the frontline and dive the backlines quickly and safely.

Disengage immediately when your moves miss, and don't try to force a fight, especially against Pokemon that have disables or burst damage. Wait until your moves become available again before attempting to fight once more.

If it becomes difficult for you to disengage, use Midnight Slash as an emergency escape tool. However, it's not neccessary to do this all the time, only in dire situations. Remember that Midnight Slash is a powerful offensive move so using it defensively is risky.

Although Psycho Cut is a simple move, you can utilize its effects in various scenarios, increasing its overall effectiveness. It's best to use it first before going in for the kill.

Catch Up to Enemies

Psycho Cut has a decent cast range and slows targets when it hits, allowing you to catch up to fleeing enemies.

You can deal more damage with your attacks against targets hit by Psycho Cut. It's best to prioritize affected targets during fights to take advantage of the increased damage.

Pokemon that are highly durable, and have a hard disable can counter Absol's critical-hit gameplay. High-durability prevents Absol from bursting down a Pokemon quickly, discouraging Absol to pursue the Pokemon. Hard lockdowns completely shut down Absol's gameplay, preventing Absol to position properly to deal damage.

Since Absol relies on its critical strikes to get an advantage over the opponent, it is important that you always get the first strike when facing even matchups. This also means that you have to learn how to target your moves properly, otherwise you will be left vulnerable if you miss.

Fight Through the Sustain

Bait Out Moves then Counter Attack

Most of Absol's easy matchups are Pokemon with low HP or Pokemon that are easy targets during the early game. Take advantage of Absols high burst damage when you are pitted against them!

See more comments (47 Comments)
Opinions about an article or post

In order for us to make the best articles possible, share your corrections, opinions, and thoughts about 「Absol Guide: Builds and Best Items | Pokemon UNITE」 with us!