Razor Claw Effect and How to Get | Pokemon UNITE 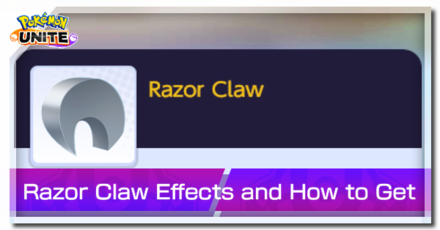 Razor Claw is a Held Item found in Pokemon UNITE for the Nintendo Switch and Mobile. Read on to learn more about the Razor Claw's stats and effects, how to get Razor Claw, and which Pokemon are best for Razor Claw!

There is a 2-second cooldown in between the activation of the item. After activating, the item will not activate in the next 2 seconds.

The increased damage will also only last 2 seconds. If you do not attack for 2 seconds after Razor Claw activates, the bonus damage will disappear.

The damage bonus is not only the (10/25/20) minimum but will also have an increase of 0.5x of the base damage! This is a significant amount and will make your Pokemon hit much harder.

The added effect of the slow will last 1 sec after hitting an opposing Pokemon with the bonus damage! This will make following up with more damage much easier.

How to Get Razor Claw

All Builds for Razor Claw

The purpose of this test is to determine Razor Claw's damage increase cooldown after an initial activation. The test was conducted by having a Pokemon use a move, then attack immediately to trigger the damage bonus effect. This process is repeated every second until the effect triggers again. The time between the two trigger event is the cooldown.

As a result of the test, it is found that Razor Claw's damage increase effect has a 2-second cooldown.

Works Great with Low-Cooldown Moves and Moves with Charges

Pokemon that have low-cooldown moves or moves with charges can benefit from Razor Claw's damage bonus effect each time they use a move. As an example, Zeraora can use each charge of Spark to trigger the damage bonus since there is enough time between leaps for the effect to cooldown.

The purpose of this test was to determine how long Razor Claw's damage bonus effect lasts after using a move. The test was conducted by having a Pokemon use a move to trigger the effect, then wait until the effect icon in the lower-right corner disappears. The duration is the difference between the moment of activation and the moment the icon disappears.

As a result of the test, it is found that the damage increase effect lasts for about 3 seconds.

As a result of the test, the damage increase varies with 89% being the highest, 80% being average, and 77% being the lowest.

As a result of the test, it is found that it takes about 1 second after the hit for the slow to take effect, and the effect lasts for about 1 second. It is difficult to notice (from the image above) how much movement speed reduction the target received as well as how long it lasts.

The purpose of this test was to determine if Razor Claw's bonus damage and slow effects work if the bearer is an Sp. Atk. Pokemon.

As a result of the test, it's confirmed that Razor Claw's effects also work with Sp. Atk. Pokemon, particularly melee ones like Gengar or Mr. Mime.

In order for us to make the best articles possible, share your corrections, opinions, and thoughts about 「Razor Claw Effect and How to Get | Pokemon UNITE」 with us!