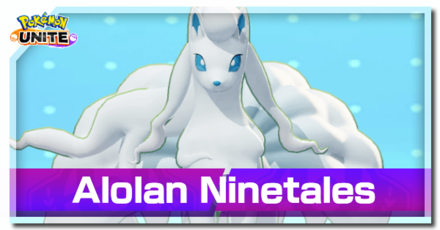 The best guide on how to play Alolan Ninetales in Pokemon UNITE for Nintendo Switch and Mobile. Check here for the best builds, Held and Battle items, movesets, as well as the latest nerfs, buffs, counters, matchups, and more!

The Best Build for Alolan Ninetales is the one with the gold crown!

This build turns Alolan Ninetales into a decent standard attack fighter and is centered around Aurora Veil, making all your basic attacks into boosted attacks for a duration and dealing more damage to targets on each hit. Dazzling Gleam acts as a complimentary move to Aurora Veil, giving you a stun to work with. With the added leap, thanks to the 1.4.1.7 Update, remember to keep your distance away from your targets as you're attacking them.

Muscle Band boosts your attack damage via increased attack speed and percentage-based damage, allowing you to throw as many attacks as possible and deal increased damage during Aurora Veil. Focus Band and Buddy Barrier work well with the damage reduction you get from Aurora Veil, giving you ample durability and survivability. However, should you want more damage, replace Focus Band with Wise Glasses.

X Attack is a must-have battle item for this build. Use it in conjuction with Aurora Veil to further boost your attack speed and damage.

Your Boost Emblem loadout should consist of 7 Red Emblems for maximum Attack Speed and 2 Green Emblems for a bit of Sp. Atk. boost. Equip Emblems that improve Sp. Atk or HP since you'll either want stronger move damage or more durability for the build. You can freely trade Attack, Critical-Hit Rate, and Movement Speed.

The is a standard mage build centered on knocking back and freezing enemies using Avalanche and Blizzard.

Following Alolan Ninetales' buff and general changes in the 1.5.1.2 update, a burst-type disabler build is now more viable in the meta. That being said, equipping Choice Specs and Wise Glasses for more damage and Focus Band for durability and survivability is the best item choice for the build. However, you can substitute Focus Band for Buddy Barrier. If you want to incorporate your attacks, replace Choice Specs with Muscle Band for increased attack damage and attack speed.

Eject Button is the best battle item for this build, giving both defensive and offensive capabilities.

Your Boost Emblem loadout should consist of 6 Green Emblems for maximum move damage, 3 Black Emblems for a bit of cooldown reduction, and 1 Emblem of any color. Equip Emblems that improve Sp. Atk since the build focuses on freezing enemies and dealing burst damage. You can freely trade Attack, Critical-Hit Rate, Sp. Def, and Def.

Much like Pikachu's Support Build, this build is only for when your team is already filled with damage dealers and you don't have traditional Supporter Pokemon available. Your gameplay should be stunning enemies using Dazzling Gleam and protecting your allies via Aurora Veil.

Eject Button is the best choice for a battle item for this build. Use it to jump in and save your allies when needed.

Your Boost Emblem loadout should consist of 7 Black Emblems for maximum move cooldown reduction, 2 Green Emblems for a bit of Sp. Atk boost, and 1 Emblem of any color. Equip Emblems that improve Sp. Atk or HP since the you'll mostly be supporting your allies rather than dealing damage. You can freely trade Attack, Critical-Hit Rate, Sp. Def, and Def.

With the added leap to Aurora Veil in the 1.4.1.7 Update, the move became more useful and more powerful, increasing its viability in battle. It's a more well-rounded move compared to its counterpart.

Dazzling Gleam stuns enemies rather than freezing them. You don't need to combo it with your other moves to disable enemies, removing the need to wait for cooldowns.

Use this moveset if you're either going for a typical standard attack Pokemon or a support type. If you want a spellcaster playstyle, always choose Blizzard and Avalanche.

Which Moveset Do You Think is Best for Alolan Ninetales?

How to Play Alolan Ninetales

Get to Level 4 Fast

At the start of the match, focus on farming wild Pokemon and leveling up to level 4 so you can get your first primary move. Once you learn the move, you can start to put pressure on the enemies.

Attack from a Safe Distance

Being fragile, it's best for Alolan Ninetales to fight from a distance. With its range, you can fight against Pokemon who rely heavily on melee attacks. Try to team up with a Defender or All-Rounder and shave off the enemy's HP through your standard attack or Avalanche.

Be Aware of the Ice Symbol Above Enemies

You can put a Pokemon in a Frozen state by accumulating the icy mark that appears whenever Alolan Ninetales attacks an opponent. You can fill up that gauge by hitting an opponent with any of the following moves/abilities:

Note that during Aurora Veil, Standard Attacks become strengthened and you can freeze the opponent in 4 hits.
Snow Warning: Alolan Ninetales Passive Effect and Cooldown

Get Avalanche and Blizzard for Burst Damage

If you want to play Alolan Ninetales as a traditional Sp. Atk Pokemon, always get Avalanche and Blizzard as your primary moveset, giving you massive burst damage tools.

Use Avalanche First Before Blizzard

Your burst damage combo should always start with Avalanche before Blizzard, allowing you to shove enemies towards Avalanche's ice wall with Blizzard. This also lets Blizzard explode near the ice wall and trigger its second effect.

You can also utilize the objects scattered in the map by shoving enemies towards them and trapping enemies using your combo.

Get Aurora Veil and Dazzling Gleam for Flexibility

Getting Aurora Veil and Dazzling Gleam gives you some flexibility. You can either play as a support or a standard attack damage dealer.

If you want to play as a support, always get Exp. Share as a core item, then build around it.

If you want to play offensively, always equip Muscle Band, then build around it. The item also works well with Aurora Veil's Boosted Attack effect.

Aurora Veil's leap mechanic is useful in various situations, such as leaping over walls, chasing or escaping enemies, and repositioning.

It's important to note that the field generated by the move appears where you land after leaping. Knowing this is useful when saving allies.

Use Snow Globe to Weaken Opponents

Alolan Ninetales struggles with high mobility Pokemon that can also burst it downs. Its moves take a bit of time to take full effect so make sure to use them once you get a chance.

Even Matchups for Alolan Ninetales

Take advantage of Alolan Ninetales Freeze mechanic to get an edge while brawling with opponents. You would want to employ hit and run tactics to slowly whittle down your targets HP. Lead them to narrow areas where you can push them towards walls with Blizzard or tip the scales by recovering HP with Aurora Veil.

Burst Down with Damage or Status Negating Moves

Pokemon that cannot counter or quickly burst down Alolan Ninetales are easy targets. Make use of Dazzling Gleam for quick and easy stuns or Aurora Veil for constant pressure.

Freeze and Burst Down

In order for us to make the best articles possible, share your corrections, opinions, and thoughts about 「Alolan Ninetales Guide: Builds and Best Items | Pokemon UNITE」 with us!