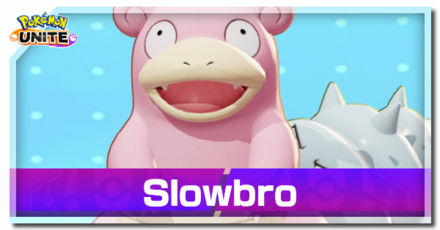 The best guide on how to play Slowbro in Pokemon UNITE for Nintendo Switch and Mobile. Check here for the best builds, Held and Battle items, movesets, as well as the latest nerfs, buffs, counters, matchups, and more!

The Best Build for Slowbro is the one with the gold crown!

This build focuses on supporting your allies by constantly disabling enemies and setting up kills using either Surf or Telekinesis. Your gameplay should consist of sticking in the front lines, soaking up damage, and shutting down key targets for your allies to knock them down from the fight quickly.

Focus Band and Buddy Barrier allow Slowbro to stay in the fight longer and make the Pokemon sturdy enough to withstand heavy attacks while it pins down opponents. Choice Specs increases Slowbro's Sp. Attack stat while also adding extra damage to Surf when it hits opponents.

Eject Button is a versatile mobility tool that is great for all sorts of situations. Use it to quickly position Slowbro behind targets so it can shove them toward your allies with Surf. It is also a great disengage tool for escaping dangerous situations. However, you can also equip X Speed instead, if you prefer a more consistent way to get extra mobility.

Your Boost Emblem loadout should consist of 6 Green Emblems for maximum Sp. Atk and 4 White Emblems for more HP. Equip Emblems that improve Sp. Atk or HP since you'd want to balance damage and durability. You can freely trade Attack and Critical-Hit Rate.

This build invests more in Slowbro's damage potential via Scald. This turns Slowbro into a ranged, damage dealer with the ability to soak damage with Amnesia. Since this build does not run defensive items, expect Slowbro to be less durable. Adjust your playstyle accordingly.

Wise Glasses, Choice Specs, and Shell Bell should provide all the Sp. Atk. boost you need to get the most damage out of Scald. Shell Bell, in particular, also offers a slight cooldown reduction to Slowbro's moves and some sustain with HP recovery.

X Speed increases Slowbro's movement speed, giving it a mobility tool to get aggressive or defensive. However, you can equip Eject Button instead for a similar effect, albeit a more direct way of repositioning.

Your Boost Emblem loadout should consist of 6 Green Emblems to maximize your moves' damage and 4 White Emblems for additional HP. Equip Emblems that improve Sp. Atk or HP since you'd want to maximize Scald's damage but remain as a tank. You can freely trade Attack, Critical-Hit Rate, and Movement Speed.

This build turns Slowbro into the ultimate tank. It is centered on soaking up damage for your allies with the help of Amnesia while constantly providing crowd control with Surf. Expect to have Slowbro leading the charge at the front lines. Since this build does not run offensive items, it is best to stick to allies at all times to compensate for the lack of damage.

Both Assualt Vest and Buddy Barrier add a significant amount of HP to Slowbro's already high health pool. Assault Vest, in particular also provides a shield against Special Attacks. Moreover, Focus Band adds more defensive stats for Slowbro while also giving a healing effect whenever Slowbro's HP gets low. Alternatively, you can equip Exp. Share instead, but only if you are in a coordinated team. All of these items should provide all the durability and survivability you need via increased HP and defenses to soak as much damage as you can from the enemy team.

Potion is a low-cooldown recovery tool perfect for staying alive for as long as possible. Since its effectiveness scales with the Pokemon's HP, the item synergizes well with items that increase Slowbro's HP further. However, if you are looking to contribute to team fights, you can opt for Slow Smoke to add more hindrances to Slowbro's kit.

Your Boost Emblem loadout should consist of 6 White Emblems for maximum HP and a combination of 2 Emblems of Blue and Purple each for additional defensive stats. Equip Emblems that improve HP, Defense, or Sp. Def since you'd want to be as durable as possible. You can freely trade Attack and Critical-Hit Rate.

This moveset offers the best crowd control, from grouped enemies to single targets. Expect to play Slowbro as a support that opens up opponents for the team to knock down.

Alternatively, Scald is a good move if you are going for more damage instead of disables. Moreover, pick Amnesia if you want to turn Slowbro into an undying tank.

Which Moveset Do You Think is Best for Slowbro?

How to Play Slowbro

Use Slowbro's initial moveset to get the upper hand in the lane, allowing you and your team to have a better transition to the mid game and late game.

Use a fully charged Water Gun to secure or steal wild Pokemon. You do need to time it properly to get the last hit.

Use Slack Off Strategically

Remember that the healing from Slack Off persists even if its cancelled early for any reason, but the healing is reduced. Utilize this mechanic to make stragetic plays and get the upper hand.

You can also use it while on an allied goal zone for faster healing.

Your primary job is to make sure your team's damage dealers are protected, so they can dish out their damage. Stay beside or near them and look out for enemies that attempt to target them. You should also utilize your ranged attacks to help out in dealing damage.

Use Surf and/or Telekinesis to stop enemies attempting to knockout your team's damage dealers.

Use Scald to help dish out damage and slow enemies who approach your allies.

After taking significant damage, use Amnesia to recover HP and prolong your life. Take note that the light blue area in your HP bar indicates how much HP you can recover when you use the move.

Use Slowbeam on Key Targets

As a Defender, your job is to soak damage for your team and to prevent your allies from getting wiped out. Use Slowbeam on damage dealers such as Attackers and Speedster to completely stop their assault and put them in a vulnerable position, allowing your allies to burst them down. Remember that Slowbeam pierces through immunities like Unstoppable, making it extremely effective against Pokemon that can gain immunities like Machamp or Blastoise.

Moreover, you can use Eject Button to quickly get to range and lock down your target.

Although a durable Pokemon, Slowbro has poor mobility, making Slowbro vulnerable to long-ranged attacks. Be wary of Pokemon with unstoppable moves that can prevent Slowbro from disabling them.

Even Matchups for Slowbro

Slowbro is sturdy enough to sustain plenty of hits, thanks to its high defenses. Make use of its arsenal of crowd control moves during brawls to open opponents up for your allies to follow through.

Tank the Damage and Disable

Slowbro is at its best when it gets to pin down key targets and soak up high amounts of damage only to get it back with Amnesia.

Not Fast Enough to Pressure HP

In order for us to make the best articles possible, share your corrections, opinions, and thoughts about 「Slowbro Guide: Builds and Best Items | Pokemon UNITE」 with us!