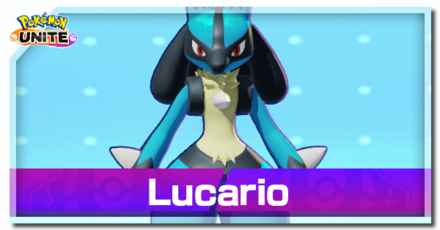 The best guide on how to play Lucario in Pokemon UNITE for Nintendo Switch and Mobile. Check here for the best builds, Held and Battle items, movesets, as well as the latest nerfs, buffs, counters, matchups, and more!

The Best Build for Lucario is the one with the gold crown!

This build utilizes Lucario's mobility and damage via Bone Rush and Extreme Speed, allowing you to evade attacks while dealing as much damage as you can in return. To maximize your damage output, it is crucial to always trigger Extreme Speed's cooldown reset.

Muscle Band boosts your attacks via increased attack speed and percentage based damage. Attack Weight adds another layer of damage to your attacks and moves, make sure to fully stack it as soon as possible. Weakness Policy works well with your gameplay since you'll go in and out of fights, increasing your damage as you take damage. You can replace Weakness Policy with Score Shield to make scoring easier or Buddy Barrier for durability and survivability.

Full Heal ensures you have means to purge disables and debuffs as well as ignore them for a duration. However, should you want more mobility, equip Eject Button instead.

Your Boost Emblem loadout should consist of 6 Brown Emblems for maximum damage and 4 White Emblems for additional HP. Equip Emblems that improve Attack or HP since you'll be dashing in and out of fights using your moves. You can freely trade Sp. Atk.

X Speed is a low cooldown mobility tool that is useful in various situations, whether you're escaping or chasing enemies. You can also use it to increase your movement speed while charging Power-Up Punch

Your Boost Emblem loadout should consist of 6 Brown Emblems for maximum damage and 4 Emblems of any color. Equip Emblems that improve Attack since the build is centered on dealing high burst damage using Power-Up Punch. You can freely trade Sp. Atk and Movement Speed.

This build is similar to the previous one but makes use of damage amplification from multiple sources, particularly from items. You'll also be using Power-Up Punch and Close Combat as your primary moveset.

Attack Weight, Weakness Policy, and Energy Amplifier provide all the firepower you need to deal massive damage in a single blow using Power-Up Punch, especially when they are on full effect.

X Attack wraps up the build, adding the final layer of damage amplification on top of your items. However, you can replace it with X Speed instead for some escape tool.

Your Boost Emblem loadout should consist of 6 Brown Emblems for maximum damage and 4 White Emblems for additional HP. Equip Emblems that improve Attack since the build practically the same as the Punch Burst Build. You can freely trade Sp. Atk and Movement Speed.

Extreme Speed and Bone Rush give Lucario insane mobility and damage throughout the game. You can endlessly dash in and out of battles while dealing damage. Although not as powerful as Power-Up Punch, you can still steal objectives like Regieleki and Rayquaza with Extreme Speed.

Which Moveset Do You Think is Best for Lucario?

How to Play Lucario

Control the Lane in the Early Game

Utilize Lucario's initial moveset to control and dominate the lane in the early game. Use them to score, secure wild Pokemon, secure knockouts, and escape bad situations.

Use Meteor Mash to shove wild Pokemon towards your side or allies, securing them for your team.

Use Quick Attack's long range and high damage to secure knockouts in the early game.

Lucario's passive ability, Steadfast gives Lucario emergency shields when its HP reaches a certain threshold. This adds to Lucario's overall durability as it is hard to take down during the early game. Combining this effect with Focus Band triggers contributes to Lucario's already high survivability.

You can reset the cooldowns of Extreme Speed and Power-Up Punch by fulfilling certain conditions.

Each time you hit a marked enemy with Extreme Speed, it resets the move's cooldown. This tactic is effective during teamfights where your enemies are grouped closely together, allowing you to reset Extreme Speed multiple times.

It's also a great way to quickly farm wild Pokemon, particularly the Swablu and Altaria camps.

You can reduce Power-Up Punch's cooldown whenever you hit enemies with Close Combat or Bone Rush, and Aura Cannon. Just be sure to get in as many hits as you can when you use them.

Before initiating a battle, it's best to throw Lucario's Unite Move in a crowd as channeling it in the middle of a team fight can leave you exposed. You can aim it from afar or while hiding in the grass and increase the chances of it hitting. Upon using this move, your next Power-Up Punch will deal more damage or all enemies hit will have the Extreme Speed mark applied to them, so use that to your advantage.

Lucario has to roam around and land its combos to be effective in fights. Having Pokemon that can completely stop Lucario's movements are the best way to control and counter Lucario.

Even Matchups for Lucario

Lucario can get the upper hand against these Pokemon if it can successfully perform its combos without interruption.

Dodge Their Moves Then Go in for the Kill

Get to Melee Range and Burst Them Quickly

Easy matchups are Pokemon that have low mobility and can get bursted down easily with Lucario's combos.

See more comments (64 Comments)
Opinions about an article or post

In order for us to make the best articles possible, share your corrections, opinions, and thoughts about 「Lucario Guide: Builds and Best Items | Pokemon UNITE」 with us!