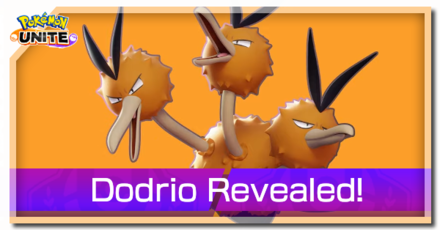 Dodrio is set to join the Pokemon UNITE roster on September 14, 2022 PDT for the Nintendo Switch, Android, and iOS. Read on to learn Dodrio's release details! 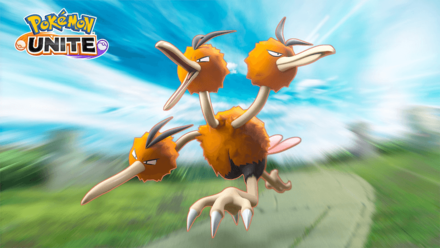 For the first time, Dodrio's UNITE License is only purchaseable for gems on release, with the ability to purchase with Aeos Coins starting on September 22, 12AM UTC.

Since Dodrio has a release day of September 14 in North America and September 15 in Japan, the new Pokemon had a release time of 5:00 PM PDT / 12:00 AM UTC. The table below shows the date and times of different regions when Dodrio released: 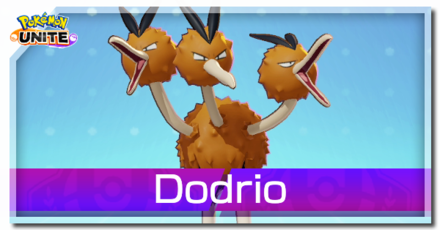 Dodrio is is here to outpace the competition! Make sure to check out our guide page below for Dodrio's best builds and items:

Dodrio was officially revealed during the Pokemon UNITE Anniversary Phase 2 announcement. It was revealed together with Mew and Scizor.

Confirmed To Be a Speedster

The official Pokemon UNITE Youtube channel has confirmed that Dodrio will join the UNITE roster as the 5th Speedster! It has been a while since a new Speedster was introduced so we're excited!

Have a Different Scoring Method

In both the reveal video and the spotlight, we see Dodrio rush to a goal zone and score three times in a row. The Pokemon may have a different way of scoring goals, which may synergize well with score-related items like Attack Weight and Aeos Cookie if each score contributes to the stack bonus!

Like in the mainline games, we expect Dodrio to have a highly mobile moveset.

Like other Speedsters in the roster, Dodrio will likely have a low Endurance stat. It will likely depend on its high mobility to compensate for the low defenses it has.

Dodrio's first official move revealed is Jump Kick. Dodrio leaps forward and does a kick. If it makes contact with an enemy or an obstacle, it jumps over it and stomps the ground, dealing damage to targets in the area and slowing them for a short duration.

Beware though - if Dodrio's movement speed decreases below a set speed, the gauge will rapidly deplete.

Dodrio's Unite Move is Triple Trample. Dodrio runs to the target location, becoming immune to hindrances, and throwing and dealing damage to enemies in its path. Afterwards, Dodrio recieves buffs. 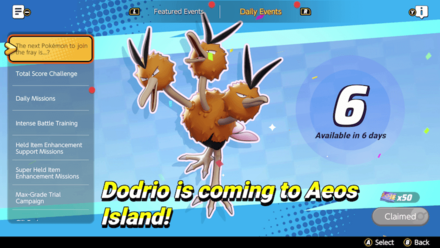 In order for us to make the best articles possible, share your corrections, opinions, and thoughts about 「Dodrio Revealed! Release Date and Time | Pokemon UNITE」 with us!