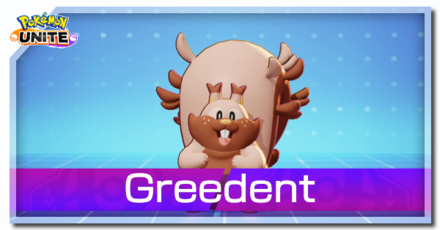 The best guide on how to play Greedent in Pokemon UNITE for Nintendo Switch and Mobile. Check here for the best builds, Held and Battle items, movesets, as well as the latest nerfs, buffs, counters, matchups, and more!

The Best Build for Greedent is the one with the gold crown!

This build focuses on aggressively scoring in the early-game to fully stack Attack Weight and Aeos Cookie. You'll be using Belch and Covet as your moveset, giving you a burst damage and mobility, respectively.

Attack Weight and Aeos Cookie increase your Attack stat and HP simultaneously as you score points. Buddy Barrier gives a decent flat HP increase, and it works well with your other two items.

Potion gives you a low-cooldown sustain on top of the Berries you pick up.

Your Boost Emblem loadout should consist of 6 Brown Emblems for maximum damage and 4 White Emblems for additional HP. Equip Emblems that improve Attack or HP since the build is centered on increasing those stats. You can freely trade Sp. Atk and Critical-Hit Rate.

This build turns Greedent into a frontline bruiser that either deals burst or DPS damage. Stuff Cheeks will be your main method of stacking Berries while you can be flexible with your other move. You can choose either Belch or Bullet Seed depending on whether you prefer burst damage or DPS, respectively.

Attack Weight and Weakness Policy provide a decent boost to your damage output. It's best to stack Attack Weight as soon as possible to gain its max benefits. Focus Band boosts your defenses and survivability, allowing you to stay longer in the frontlines.

Potion is the default battle item for the build, adding another layer of sustain on top of the Berries. However, you can also equip Slow Smoke instead for some crowd control.

Your Boost Emblem loadout should consist of 6 Brown Emblems for maximum damage and 4 White Emblems for additional HP. Equip Emblems that improve Attack or HP since you'd want to deal damage and also tank some of it. You can freely trade Sp. Atk and Critical-Hit Rate.

This is a defensive and utility build centered around tanking damage for your team while slowing enemies using Bullet Seed. Stuff Cheeks is the fastest way to max out on Berries so you can get the bonus effect from Bullet Seed, and provides you with burst healing so you can stay in the frontlines.

Assault, Focus Band, and Buddy Barrier makes you incredibly hard to stop while casting Bullet Seed. You can be flexible when choosing your held items, but the focus should be on defense and HP.

Full Heal ensures that you'll be able to stick to your targets and be safe from stuns while casting Bullet Seed. If you want a crowd control tool to work with, equip Slow Smoke. If you want more sustain, equip Potion instead.

Your Boost Emblem loadout should consist of 4 Blue and Purple Emblems for additional defenses and 2 White Emblems for a bit of HP. Equip Emblems that improve HP, Defense, or Sp. Def since you'd want to be as durable as possible. You can freely trade Sp. Atk. and Critical-Hit Rate.

Covet generally has better synergy with Greedent's other moveset. However, if you find Covet hard to control, learn Stuff Cheeks instead. This is also true If you want to have a more straightforward way of gaining berries. Moreover, picking Bullet Seed over Belch gives you more control as you can move while it is active.

Which Moveset Do You Think Is Best For Greedent?

Greedent's gameplay is centered around managing Berries. Apart from the healing it gives, it increases Bullet Seed's damage and reduces Belch's cooldown with max Berries. Given this, always max out Berries before using moves.

Furthermore, as much as possible, always get Berries that are lying on the floor. However, if it's too dangerous to get it, it's best to just leave it.

Learn Stuff Cheeks if you want the most efficient way to fill up on Berries. Keep using it whenever its available for a consistent source of Berries.

Although Covet takes a lot of time before you can fill up on Berries, it does give you a teamfight tool instead. Use Covet when a fight breaks or initiate a fight, just make sure to hit enemies as you maneuver around.

Pick Up Yellow or Green Berries

You can also pick up Yellow or Green Berries to fill up on your stash.

Greedent has a unique mechanic of being able to pick up Yellow Berries even at full HP and add them to the Berry stacks (as shown above).

Be Mindful of Where Berries Land

One downside to Greedent's Berry mechanic is that enemy Pokemon can also pick them up and heal. With this, it is important to be mindful of where your Berries land, especially when using Stuff Cheeks.

Utilize Tackle and Defense Curl in the early game to get an advantage as the game progresses.

One way to utilize Tackle is by using it to sneak pass enemies to score goals, then using it again to escape. You can achieve this if you have 3 to 5 Berries stored, reducing the move's cooldown enough to use it again after scoring. This is becomes more effective if you're using the Score Stack Build.

Moreover, if there are Yellow Berries present behind the enemy's goal zone, you can use Tackle to steal the them. It's best to do this after scoring points to waste the enemies' time since they'll be chasing you.

Using Tackle to take wild Pokemon or steal them from your enemies is also a great way to utilize the move.

Use Defense Curl to take and win early engagements. The shield and healing effects allow you to prolong fights and trade blows with an enemy.

While casting Bullet Seed, you can control where Greedent is firing towards. Use this mechanic to stick to your targets and maximize the damage.

Bullet Seed has the unique mechanic of allowing Greedent to stop firing seeds without ending the move itself. Use this mechanic to reposition or re-aim when needed.

Bullet Seed is also great for kiting enemies, especially against melee Pokemon. Although its range is shorter than other kiting moves, it can slow enemies to a crawl.

Go in Circles During Covet

Although it is difficult to maneuver during Covet, it is nonetheless an effective crowd control move. The trick to maximize its stun is to go in circles around the enemy, providing constant stuns, especially in teamfights. Moreover, with the berries healing Greedent, opponents will have a hard time catching up.

Because of Covet or Stuff Cheeks, Greedent can quickly roam around the map and score points. Use these moves to constantly score points for your team, putting pressure on the enemy to defend their goal zones and creating space for your team to level up and take objectives.

After using Berry Belly Flop, Greedent gains unlimited Berries for the duration, allowing you to constantly activate Belch or deal increased damage with Bullet Seed without losing Berries as long as the Unite move's effect is still active. Remember this when diving down into groups of enemies!

This set of combos can be perfromed in the early game. It takes advantage of Greedent's innately high defenses, constant healing, and slippery moves to give opponents a hard time.

This set of combos utilizes Belch to burst down targets.

This set of combos utilizes Bullet Seed to apply constant pressure towards an opponent.

Greedent has an affinity to be very playful with its moveset, opting for a more pesky method of outpacing enemy pokemon with its mobility. The best way to outplay this is to disrupt its movement, especially when it has Covet.

Take advantage of Greedent's innate durability and slippery moveset to wreak havoc on the battlefield. Be wary, however, of your stash of berries via Cheek Pouch as it is what keeps Greedent going. So, make sure you aim your Belch or Bullet Seed attacks and keep your berry meter topped off.

Outmaneuver and Burst Down

Not Enough to Chink the Armor

Make use of Greedent's slippery nature to give these Pokemon a hard time fighting you. Throw in a couple of Belch or Bullet Seed triggers while running around with Covet and they'll be overwhelmed.

Get Close and Maintain the Pressure

See more comments (19 Comments)
Opinions about an article or post

In order for us to make the best articles possible, share your corrections, opinions, and thoughts about 「Greedent Guide: Builds and Best Items | Pokemon UNITE」 with us!