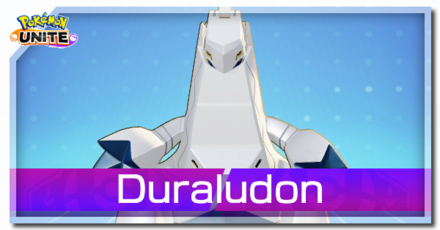 The best guide on how to play Duraludon in Pokemon UNITE for Nintendo Switch and Mobile. Check here for the best builds, Held and Battle items, movesets, as well as the latest nerfs, buffs, counters, matchups, and more!

The Best Build for Duraludon is the one with the gold crown!

This is a long-range build that turns Duraludon into a hard-hitting turret. It is centered around maximizing the damage while the Pokemon is in Flash Cannon. It also utilizes Dragon Tail for repositioning and extra mobility. Since this build focuses on single targets and will leave Duraludon vulnerable, it is important that you stick to your teammates and activate Flash Cannon in a safe place like inside an allied goal zone.

Muscle Band and Scope Lens work well with Flash Cannon, giving your attacks percentage-based damage and increased critical hit chance and damage. Focus Band gives you ample durability and survivability during Flash Cannon since you're in a vulnerable position. It also gives Duraludon extra survivability, which will be helpful during the early game where you need to level up to reach your move upgrades.

Take note that you can still activate your Battle Items while using Flash Cannon. For more firepower, X Attack adds more damage as you snipe down single targets. If you want to be flexible, equip Eject Button for repositioning when necessary.

This is a balanced build focused on dealing high AoE burst damage by marking targets with Standard Attacks and bursting them down with Dragon Pulse. It also runs Stealth Rock, which add more marks to opponents in an area. Remember to attack when you knock out an enemy Pokemon to reduce Dragon Pulse's cooldown.

Muscle Band is a reliable damage item, increasing your attack damage and attack speed as you mark your targets. Focus Band and Buddy Barrier provide enough durability to enable you to use Dragon Pulse constantly. It also gives protection when you activate Revolving Ruin.

Eject Button gives you a mobility tool to work with, allowing you to escape or get aggressive.

This is another high burst damage build centered on Dragon Pulse but uses Dragon Tail as its complimentary move instead. Remember to use Dragon Tail to step back from enemies that get too close, then follow up with a fully charged Dragon Pulse to punish their aggression.

Muscle Band and Attack Weight provide a decent boost to your burst damage while marking targets. It would be best to pair up with a friend so you can coordinate with them when stacking bonuses. Buddy Barrier increases your durability through HP and gives you protection when using your Unite Move.

Eject Button gives you the mobility to either get aggressive or act as an escape tool.

For a more consistent approach to bursting down targets,use Stealth Rock and Dragon Pulse. Stealth Rock can apply marks much faster and in a larger area, improving Dragon Pulse's effectiveness.

Which Moveset Do You Think is Best for Duraludon?

Stay Behind Your Allies

Like with other Attackers, Duraludon is not a durable Pokemon and can easily be pressured if you get too aggressive. So, it is best to stay behind the lines and wait for the enemy team to commit to a fight. Fortunately, Duraludon's kit has a decent enough range for you to pressure enemies from afar without the need to face them head-on. This is especially true when you are running Flash Cannon as it leaves you open to being piled on by multiple opponents.

Avoid Pokemon that have Burst Potential

While Duraludon's kit can easily melt multiple enemies and single targets, it is not fast enough to stave off Speedsters that can pressure low HP Pokemon. Be mindful of the enemy team's Pokemon that have burst potential. Make sure to always top off your HP to avoid being quickly knocked down, especially when you are facing Pokemon that have high mobility and high damage like Talonflame or Absol.

Hitting opponents with Standard Attacks, Metal Claw, or Stealth Rock will mark them. It can be stacked up to 5 times and will be removed if you do not hit the enemy after a short time. Marked targets are dealt more damage when they are caught in Dragon Pulse's blast, so be sure to mark all targets in the area before activating the move to get the most damage!

When you defeat a marked opponent this way, Duraludon's next 4 Standard Attacks will have increased damage and will heal Duraludon. Additionally, Dragon Pulse's cooldowns will be reduced from 10s to 5s. This will give you enough time to mark your targets with Standard Attacks again until you can use Dragon Pulse again. This allows you to potentially chain multiple Dragon Pulse activations to clean up a fight!

Watch Out for Pokemon with Full Heal

Pokemon equipped with Full Heal can remove all of Dragon Pulse's stacks (blue markers) from themselves, preventing you from maximizing the move's damage. It's best to either target Pokemon that don't have the item equipped or wait for Full Heal is on cooldown. 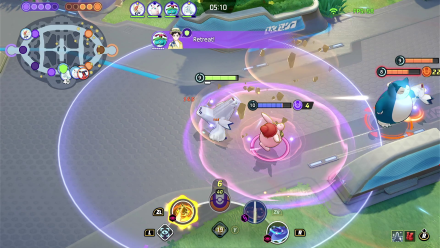 Stealth Rock is a great offensive move that can continuously pressure an opponent's HP from afar. It can also be used to zone out opponents while getting marked. What makes it different from Crustle's Stealth Rock is that you can have up to three charges of the move and the affected area is invisible to the enemy team until one an opponent steps on it. Below are some ways you can fully take advantage of the move.

Once an area is affected by a Stealth Rock, it will deal continuous damage to all enemies standing on it. This means that you can place it on an allied goal zone and prevent opponents from charging up and scoring. Moreover, You can even stack multiple Stealth Rocks on top of each other to get around the shield Buddy Barrier produces. And, since Stealth Rock is invisible to the enemy team, it will take a moment before they will notice what they are standing on!

Set up traps for your enemies by placing Stealth Rocks in narrow areas. This is especially effective if you have an All-Rounder or Defender that can bait enemies into a fight while standing in the affected area. And, being invisible to the enemy team makes this move a great trap to set when teams clash for objectives.

Other Moves Can be Activated While in Flash Cannon

When opponents get close, you can increase the distance with Dragon Tail while being able to damage and stun them. It is also possible to activate Duraludon's unite move, Revolving Ruin, while Flash Cannon is active allowing you to catch your opponents off-guard with a sudden burst of damage!

Battle Items can be Activated too

Battle Items can be activated too while Flash Cannon is active. This gives you a bit more flexibility and protection, which will depend on the item you are running. X Attack makes the move more deadly as it increases Duraludon's Attack damage and speed. Eject Button helps you reposition Duraludon in case an enemy gets too close. Lastly, running a Full Heal will help give Duraludon more protection from knockbacks as it is not unstoppable while the move is active.

While using Flash Cannon, you will only be able to target one enemy at a time until it is defeated or they get out of Duraludon's range. We advise you to turn on Lock-On Icon in the game's Controls settings to get more control out of targetting with Flash Cannon. By utilizing this, you will be able to cycle through targets and focus down on low HP opponents!

Use Revolving Ruin at a Safe Distance 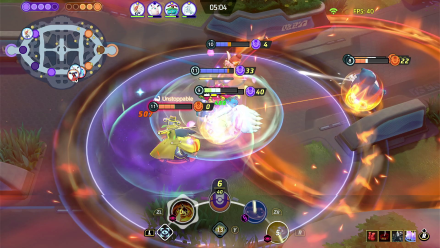 Revolving Ruin is a great finishing move that can easily knock down enemies caught in its radius. Although the move can be devastating when you get to activate it in the middle of a clash, it is still best to keep a distance when activating the move since you can still be knocked down in the middle of channeling the move, especially if you do not have a Buddy Barrier equipped. Like Duraludon's other moves, Revolving Ruin's range is wide enough to damage opponents from afar.

This set of combos takes advantage of Dragon Pulse's bonus damage from marked opponents to deal insane amounts of damage.

This set of combos adds Duraludon's Unite move, Revolving Ruin, into the mix to deal massive damage. The Dragon Pulse variation utilizes Stealth Rock to distribute the damage and marks around the area before letting out burst damage, while the Flash Cannon variation is great for focusing down single targets.

Although Duraludon has long-range and high burst damage, it can easily get overwhelmed once a Pokemon gets too close and interrupts its attacks. Pokemon that can dive straight for Duraludon are the perfect counters against the Pokemon.

Duraludon can get the upper hand against these Pokemon if it can fully stack Dragon Pulse's damage or freely attack during Flash Cannon without getting interrupted.

Aim Them First or Force them to Retreat

Easy matchups are Pokemon that can't burst down Duraludon before it can unleash a fully-charged and fully-stacked Dragon Pulse.

Kite Them with Ranged Attacks

Shred Through Its Shields

See more comments (24 Comments)
Opinions about an article or post go here.
Opinions about an article or post
We at Game8 thank you for your support.
In order for us to make the best articles possible, share your corrections, opinions, and thoughts about "Duraludon Guide: Builds and Best Items" with us!
When reporting a problem, please be as specific as possible in providing details such as what conditions the problem occurred under and what kind of effects it had.