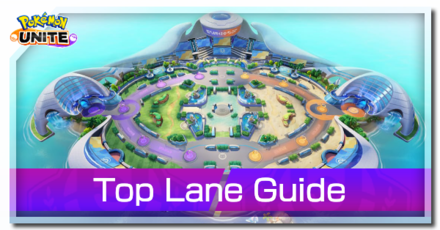 How to Play Top Lane

Pick Top Path Before the Battle 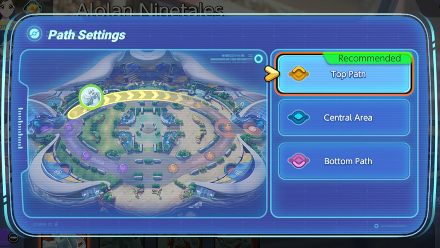 Before the start of the match, it is highly recommended that you pick the Top Path using the Battle Prep. Though not required, this will surely help in relaying your intention and prevent a lane from getting cluttered.

It is important that your team captures the extra Corphish at near the entrance of the Jungle area, as well as the Vespiquen and Combees when they spawn. The extra EXP you get will be a huge advantage moving forward.

Since the opponent will surely be doing the same strategy, contesting these camps will always be a battle. Make sure to focus down on the Wild Pokemon and get the final hit.

Score Goals Only When There is an Opening 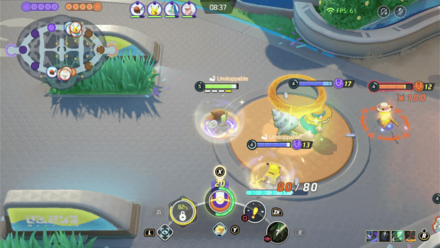 Though it might be tempting to push head-on towards enemy players and engage in epic combat, Top Lane players should play it safe and not overextend their reach. Compared to the Bottom Lane, the top lane is played methodically, and will rely on managing your Pokemon's level and accumulated points. One wrong move could knock you down and make you lose all your Aeos Energy and leave your goals defenseless.

Wait For a Gank Before Pushing

Top Lane is pretty quiet for the early parts of the game as the main focus is taking out Wild Pokemon and storing Aeos Energy. This means that the Top Lane will be at a stalemate for the early stages of the game. To break the stalemate, you can wait for your allied Jungler and set up for a gank. Once the Jungler is in position, you can initiate a fight and potentially take out your opponents, breaking the stalemate.

Transition to Bottom Lane for Drednaw

Rotom and Drednaw will both spawn when the match time hits 7:00. Even if Rotom is the closer objective, Drednaw should be prioritized over it because of the better reward. You can have one Top Lane player transition down to the Bottom lane to help capture Drednaw, while the remaining Top Lane players defend the Goal Zones.

Defeating Rotom allows you to apply heavy pressure on the top lane by gaining extra pushing power and rendering enemy goal zones defenseless, making it vital for an early lead in the match. Compared to Drednaw at the bottom lane, Rotom has relatively low HP and can be defeated by Top Lane Pokemon without needing reinforcements.

The Top Lane should have a Pokemon with high single target damage to help farm wild Pokemon and level up faster. Attackers will provide additional damage to help its lane partner get EXP efficiently.

A Pokemon with High Endurance will help push or defend Goal Zones longer. Using an All-Rounder or a Defender Pokemon is ideal for effectively preventing the enemy to score. It will also help with the Rotom fight later on as they can soak most of the damage.

Cinderace and Greninja are perfect for transitioning to the Bottom Lane when Drednaw spawns. They can help provide additional offense when contesting Drednaw, as well as pushing the Bottom Lane once captured.

Rotom will spawn at the center part of the top lane at the 7-minute mark. Not only does Rotom fight the opposing team when you defeat it, but the enemy goal will also be charged for 24 seconds when Rotom reaches it, making it easier to destroy the enemy goal and gain points!

What is the Top Lane?

The Top Lane in Pokemon Unite refers to the path located at the top part of Remoat Stadium. It has 2 Goal Zones present for both teams. However, the Top Lane does not have a beach area, making it smaller compared to the Bottom Lane. 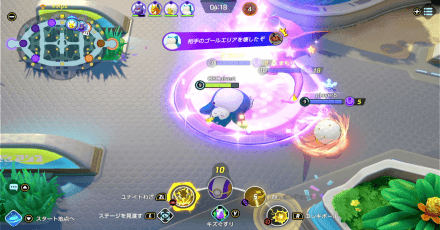 Top Lane battles consist of accumulating experience and Aeos Energy as fast as possible, then eventually scoring massive points with the use of Rotom. Since the top lane has slightly fewer wild Pokemon spawns compared to the bottom lane, it is important to focus on defeating every wild Pokemon you come across - even wild Pokemon on the enemy's side to steal Aeos energy. The flow of a match is often dictated by how the top lane can consistently take or maintain a score advantage.

In order for us to make the best articles possible, share your corrections, opinions, and thoughts about 「Top Lane Guide: How to Play Top | Pokemon UNITE」 with us!