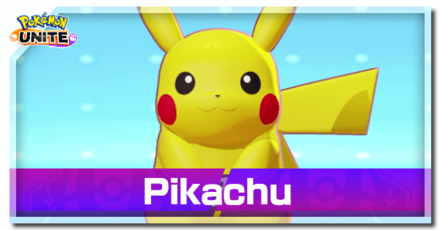 The best guide on how to play Pikachu in Pokemon UNITE for Nintendo Switch and Mobile. Check here for the best builds, Held and Battle items, movesets, as well as the latest nerfs, buffs, counters, matchups, and more!

The Best Build for Pikachu is the one with the gold crown!

This build focuses on reducing the cooldown of Pikachu's moves so it can consistently use them during battle. Assuming your Held Items are at max level, and you have cooldown reduction emblems, you can essentially reduce Electro Ball's cooldown to around 3 seconds. Since this build does not run items that increases Pikachu's durability, your gameplay should consist of staying behind your allies while attacking the enemy team from a safe distance. It is also important to farm Wild Pokemon and race to level 9 to learn Thunderstorm as early as possible.

Shell Bell gives more Sp. Attack Pikachu while providing the Pokemon sustain through HP recovery with every move hit. Energy Amplifier, on the other hand, adds a significant amount of damage to Pikachu's Unite Move faster recharge rate, durability, and damage increase after casting Thunderstorm while also decreasing its already low charge rate. Having both of these items equipped helps lower Pikachu's move cooldowns by a significant amount. Lastly, Choice Specs is your default offense item as it adds extra damage to your skill shot moves.

Eject Button is the best choice for this build, giving you the mobility to get aggressive or be defensive. However, if you feel you can maneuver well enough, you can equip X Attack instead for more damage and faster farming.

Your Boost Emblem loadout should consist of 7 Black Emblems to add more cooldown reduction to Pikachu's moves and2 Green Emblems for a bit more damage. For the last Emblem slot, you can equip any emblems that improve Sp. Atk or HP. However, we recommend using the Mewtwo emblem if you have it unlocked for more cooldown reduction. You can freely trade Attack, Critical-Hit Rate, and Movement Speed.

This is a high-damage, single-target build great for supporting the team with stuns and slows. Since you will be more of a single-target assassin, your gameplay should be taking pinning down Pokemon using Electro Ball and Volt Tackle, particularly enemy Attackers and Speedsters. Taking out the enemy's damage dealers quickly makes it easier for your team to win fights.

X Attack further adds damage to Pikachu's moves so you can pressure opponents better. If you prefer to have more mobility, consider running either Eject Button or X Speed.

Your Boost Emblem loadout should consist of 6 Green Emblems to maximize your moves' damage and 4 Emblems of any color. Equip Emblems that improve Sp. Atk since the build focuses on dealing high burst damage. You can freely trade **Attack and Critical-Hit Rate.

This is an all-in damage build that takes advantage of Pikachu's long-ranged move. It has Pikachu situated at the back of the line and provides AoE damage and stuns via Thunder and Thunderbolt. Since this build does not run any defensive items, it will be best to play passively and stay behind your teammates all the time.

All your items boost Pikachu's Sp. Attack stat, which further increases the Pokemon's move damage. To compensate, X Speed is a must-have Battle Item for this build, allowing you to escape enemies when things go awry.

Your Boost Emblem loadout should consist of 6 Green Emblems for maximum damage and 4 emblems of any color .Equip Emblems that improve Sp. Atk, HP, or Movement Speed since you'll be providing firepower from the backlines. You can freely trade Attack and Critical-Hit Rate.

Thunderbolt is a must have for team battles as it locks down any enemies caught within the AOE with a long stun. Stopping enemies in teamfights is the top priority, if they are stunned they cannot use skills which is a huge advantage for you and your team.

Though not as huge as the Thunderbolt, the Electro Ball can stun enemies within an AOE as well as deal huge damage when timed correctly. The less health your enemy has, the more Electro Ball deals damage. Use this skill to chase down enemies on the run!

Which Moveset Do You Think is Best For Pikachu?

How to Play Pikachu

Get Aggressive in the Early Game 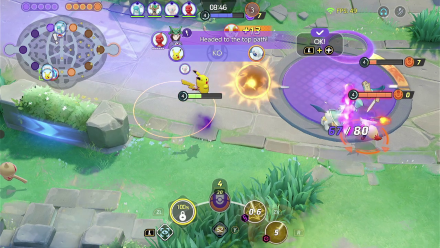 Pikachu has one of the best early-game kits because of its stuns and quick damage. While it is still recommended that you focus on farming Wild Pokemon during the early game before engaging the enemy, Pikachu is a dependable Attacker that can get easy kills it needs to.

Set up Knockdowns with Electroweb

Electroweb incapacitates a single target for a decent amount of time. It is best used for trapping over-extending opponents, especially when they are far from their goal zone. Since the move also deals damage when it lands on an opponent, it will be easier for you to knock them down once isolated, especially if you have an ally to help you.

Alternatively, you can also use Electroweb defensively by stopping the opponent in place while you pursued.

Thunder Shock offers a decent amount of early-game damage. Since the move has a sure-hit type, you will be able to activate it easily without the need for much aiming. Use it to pressure your opponents or steal Wild Pokemon spawns to deny EXP from the enemy team.

Pair Up with an Ally with High HP 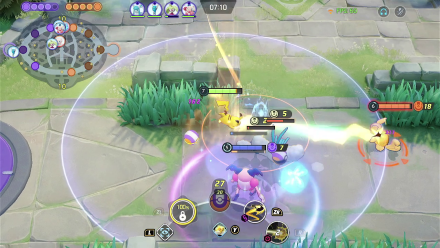 Pikachu is a glass cannon - high damage output, but can easily be shattered. So, it is important that you never fight alone. You will want to pair up with sturdy allies, preferably Defenders, and stun any enemies that get close and provide offense. Doing this will also allow Pikachu to support bulky Pokemon like Snorlax or Slowbro by compensating for their lack of range. 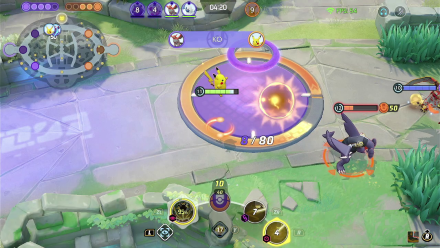 Once Pikachu reaches level 4, it will get to choose its damage move. While both choices are great in dealing high amounts of damage, the choice of Thunder or Electro Ball should be made based on the composition of the enemy team.

Thunder deals continuous damage within an affected area. The effect is great if you are looking to deploy Pikachu at safe distance and deal AoE damage. It is best suited for team fights when the enemy is grouped while contesting objectives.

Electro Ball is a sure hit move that is easy to use. It is great for fighting highly mobile enemies like Speedsters or All-Rounders with dash moves. Moreover, it has a short cooldown, allowing you to frequently pressure your target with attacks.
Electro Ball: Pikachu Move Effect and Cooldown

Get More Value Out of Stuns 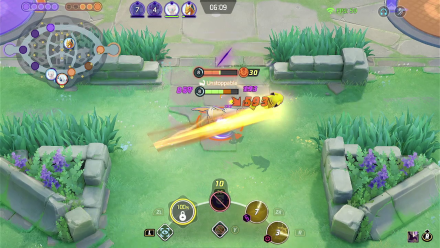 Pikachu has a strong arsenal of long-ranged stun moves that also packs a punch. Both moves have the same effect of stuns but differ in how they are controlled. One move may be best to pick depending on your desired playstyle.

Volt Tackle deals damage to a single target while locking them down in place for a short time. If you time it right, you can also disrupt and cancel enemy moves as they activate them. Be careful, as you tackle the target, you will be pulled toward their position, which may open you up for a counterattack. For safety, it is best to have an ally nearby to follow up on your attack or protect you if anything goes wrong.

Get More Range with Thunderbolt

Unlike Volt Tackle, Thunderbolt have you shoot down a thunder strike at the designated area, dealing AoE damage and stunning opponents. A well-placed Thunderbolt will incapacitate opponents long enough for your allies to bombard them with attacks. Use this to hold enemies in place to defeat them in one go or simply deal damage AoE damage at long range.

Since Pikachu's attack range is quite large, you can easily kite and poke enemies safely at the edge of the attack range, before stunning them and finishing them off with an Electro Ball or Thunder. Using Battle Items like Eject Button or X Speed can be used as an emergency retreat or X Attack to ensure a KO. 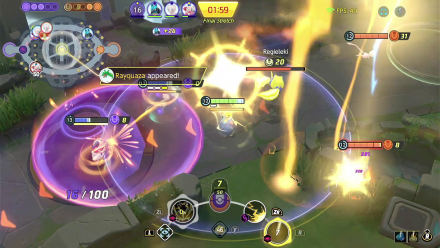 Thunderstorm's charge rate is relatively fast, allowing you to use it more freely and frequently. You can further improve it further by equipping Energy Amplifier with the bonus of dealing more damage for a short duration after using it.

Save Thunderstorm for Team Fights

Since big team fights typically break out around important map objectives, Pikachu's Unite Move Thunderstorm should be saved until then. While the damage is not great, it has a large area of effect and can be used to finish off the enemy team at low health.

Alternatively, Thunderstorm can also be used as an escape mechanism for Pikachu when the need arises. Activating the Unite move will give Pikachu a window of invulnerability to escape, as well as shoot lightning bolts at nearby enemies. No matter the situation, it is best to save the Unite move for intense fights.

Matchups and Counters for Pikachu

Hard Counter by Closing the Gap

Pikachu has no escape moves to rely on once its cornered. Closing the distance between you and Pikachu increases your chances of winning a fight. Most likely if you chase a Pikachu, it will either stun you and run or attempt to use its UNITE move as a ditch effort to burst you down. If you survive the fight, punish Pikachu accordingly.

Even Matchups for Pikachu

Pikachu must be able to use its moves constantly from a safe distance in order to win against these Pokemon.

Easy matchups are Pokemon that are susceptible to Pikachu's disables and burst damage.

Disable and Burst them Quickly

In order for us to make the best articles possible, share your corrections, opinions, and thoughts about 「Pikachu Guide: Builds and Best Items | Pokemon UNITE」 with us!