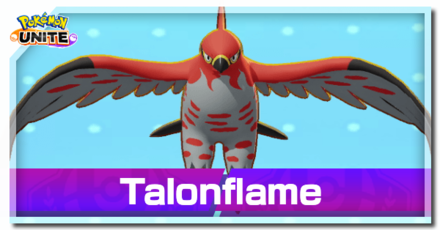 The best guide on how to play Talonflame in Pokemon UNITE for Nintendo Switch and Mobile. Check here for the best builds, Held and Battle items, movesets, as well as the latest nerfs, buffs, counters, and more!

The Best Build for Talonflame is the one with the gold crown!

This build focuses on maximizing Talonflame's burst damage to get easy knockdowns. Set up your attack by landing on enemies with Fly, then finishing them off using Aerial Ace. You can also use Fly to easily disengage from fights when the need arises.

Muscle Band, Scope Lens, and Razor Claw contribute to Talonflame's burst damage output, particularly critical hits. Since you don't have any defensive items, you have to pick your targets carefully. Because of their low HP, focus on enemy Attackers or Supporters first.

Eject Button is a great tool for escaping when things go awry, making it a must-have battle item. Try to save it for escaping only as much as possible.

Your Boost Emblem loadout should consist of 6 Brown Emblems for maximum damage and 4 White Emblems for additional HP. Equip Emblems that improve Attack or Critical-Hit Rate since the build is centered on burst damage. You can freely trade Sp. Atk and Movement Speed.

This build takes advantage of the cooldown reset mechanic from using Brave Bird. Your gameplay should be diving the backlines with Brave Bird then bursting them down with multiple Aerial Ace activations. Successfully hitting an opponent with Brave Bird get marked and will reset Aerial Ace's cooldown when you hit them with a boosted attack. If you're fast enough, you can chain the reset of Aerial Ace as long as there are marked enemies. Always utilize this mechanic to maximize your damage output and sustain yourself with heals.

Muscle Band and Scope Lens are staple damaged items, giving you enough damage to burst down targets. Focus Band gives you the extra sturdiness and heals you when your HP gets low enough, ensuring better survivability after a successful setup.

X Speed gives Talonflame a consistent source of a movement speed buff for repositioning. An Eject Button is a good alternative if you are looking for a more straightforward dash.

Your Boost Emblem loadout should consist of 6 Brown Emblems for maximum damage and 4 White Emblems for additional HP. Equip Emblems that improve Attack or Critical-Hit Rate since the build is also about dealing burst damage. You can freely trade Sp. Atk and Movement Speed.

This build utilizes the damage and mobility from Flame Charge and Fly. This is a stable build if you want to go to lanes instead of the jungle.

Attack Weight and Razor Claw boosts your burst damage further, especially once Attack Weight is fully stacked. Buddy Barrier increases your HP and gives you a teamfight tool, especially since your Unite Move recharge rate is fast. However, you can replace Buddy Barrier with Focus Band for a better laning item.

Eject Button is the default battle item for the build, adding more mobility. However, you can also equip X Speed instead for a similar effect.

Your Boost Emblem loadout should consist of 6 Brown Emblems for maximum damage and 4 White Emblems for additional HP. Equip Emblems that improve Attack, Critical-Hit Rate, or HP since you'll be laning for this build. You can freely trade Sp. Atk.

Both these moves offer a balance of mobility and damage with a bit of sustain. If you want more mobility for traversing the battlefield, learn Flame Charge instead of Aerial Ace. For a more combo-based approach, learn Brave Bird and Aerial Ace so you can take advantage of the cooldown reduction effect.

Which Moveset Do You Think is Best for Talonflame?

How to Play Talonflame 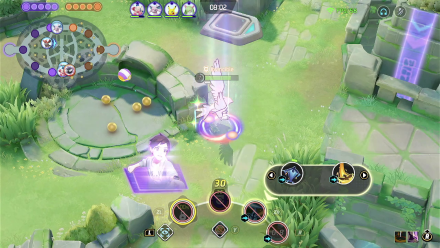 Talonflame truly shines when it gets access to its powerful, high-damaging moves at Level 7. Here, you can either pick the aggressive Brave Bird or the tactical Fly. Both of these moves greatly improve your ganking power, so make sure to rush your level to 7 before starting to make plays across the map. You can then use the surge in strength to surprise a vulnerable lane and then keep on pressing your advantage from thereon.

For the fastest start possible, Taking the jungler role is recommended. Not only will Talonflame benefit from the uncontested farming, but it can also traverse the central area of Theia Sky Ruins efficiently thanks to its movement speed and dash moves. Having access to Acrobatics and Peck during the early game makes farming Wild Pokemon camps easier.

Get the Most Out of Dash Moves 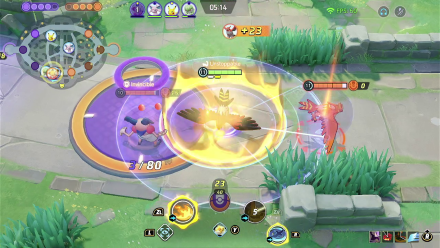 Talonflame has an arsenal of Dash moves that give it incredible mobility. Taking advantage of these moves is core to Talonflame's gameplay.

Use Fly to Engage or Disengage from a Fight

Opting for Fly gives Talonflame both a burst move and a means of escape. You can even dodge attacks comepletely if you time the move right. Additionally, your movement speed is increased while using Fly, so most enemies will not be able to catch up to you, which is more true if you use it to go over walls.

Use Brave Bird to Burst Down Opponents

Brave Bird can deal insane amounts of damage but its more useful strength is the distance it covers. You can use Brave Bird to travel to the enemy team's rear, then pick off easy targets to break their formation. Take note that Brave Bird does recoil damage to Talonflame. So, make sure to pick targets that you are certain you can take down fast.

Sneak Points if you have Score-Related Items 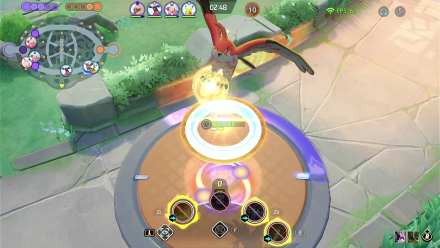 Talonflame can easily go in and out of enemy goal zones thanks to its moves acting as an escape mechanism. Take advantage of this by equipping items that scale up in power like Attack Weight or a Score Shield. Every time you score a goal (maximum of 6) you can gain an extra boost in stats your these items. Use Acrobatics to sneak behind enemy goal lines if no ganks are favorable to score some points and increase Talonflame's power even more!

Learn Damage Move Based on Playstyle 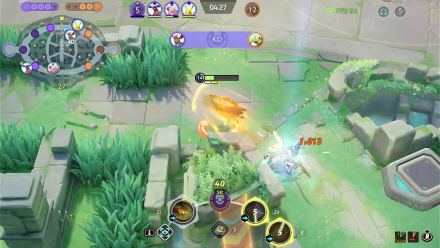 Talonflame's damage moves are brawl-focused and give you more flexibility when fighting targets. While both moves can be used to deal damage, they have distinct differences that can help you realize your desired playstyle for Talonflame.

Get HP Recovery with Aerial Ace

Aerial Ace is a great sure-hit move that allows Talonflame to reposition itself behind targets. Moreover, the move increases Talonflame's survivability by giving HP recovery each time it hits a target. This helps you stay in the fight longer to deal the final hits. Aerial Ace is best paired with Brave Bird, so you can take advantage of the cooldown reduction effect when you hit targets.

Get Consistent Mobility with Flame Charge

Flame Charge is a more straightforward damaging move that also acts as an additional source of dash for Talonflame. Using it will also instantly fill Talonflame's boosted attack meter, allowing you to follow up with even more damage. Unlike Aerial Ace, you can use Flame Charge without a target, giving you more flexibility. 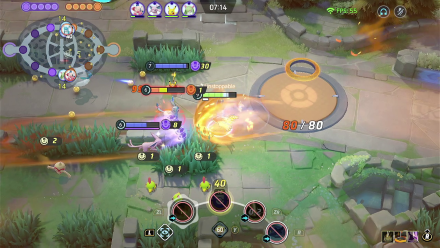 Talonflame's kit excels at diving into fights to burst down enemies in quick succession. This particular Pokemon warrants increased aggression as all of your moves revolve around closing the distance between you and the target to deal high amounts of damage. However, Talonflame's survivability is not that high, especially when it misses its initial burst moves.

Talonflame's initial burst damage is enough to take down single targets. However, Talonflame may be left vulnerable if its target survives. So, make sure to pick targets that are easy matchups or Pokemon who sustained enough damage for a quick knockdown. Additionally, although you can deal AoE damage with your dash moves, it is still best to avoid charging toward grouped enemies, especially when they have full health.

Flame Sweep can cover a decent amount of range. Use it against the enemy team to push them into disadvantageous positions. This will help contest Boss Pokemon as you can effectively zone enemies out and give your team an opening to secure objectives. After using it, use Fly or Brave Bird to escape, especially if you're alone inside enemy lines.

Being a highly mobile Pokemon, Talonflame will have unfavorable matchups against Pokemon that have a combination of disables, high defenses, and high sustain. Once it gets caught, Talonflame will be forced to use its moves defensively.

Even Matchups for Talonflame

Talonflame's moves have high burst potential that can make quick work of its targets. However, because of their high cooldown and force engagement, you may be left vulnerable to a counterattack if you either miss or do not knock down the target with combos.

Outgun and Get the First Strike

Take advantage of Talonflame's burst moves to dispose of easy targets quickly before they can fight back.

Get Close and Burst Down

Cut Off the Support

In order for us to make the best articles possible, share your corrections, opinions, and thoughts about 「Talonflame Guide: Builds and Moves | Pokemon UNITE」 with us!