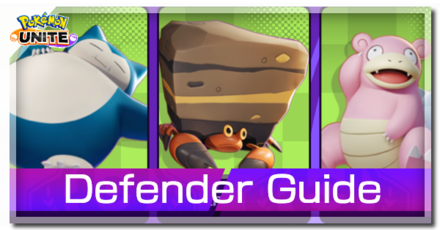 This is a guide on how to play the Defender Role in Pokemon UNITE. Read on to learn how to play Defenders, their strengths and weaknesses, the best lanes, as well as the best Defender Pokemon!

How to Play Defender

Opponents will have a hard time knocking Defenders down, especially when it is in a goal zone. Defenders aren't easily pushed back, making it easy to block the enemy from scoring entirely by using moves with crowd control effects.

Being a Defender means you are willing to stand in front of enemy attacks to protect your allies, regardless if it's a Boss or enemy Pokemon. You can utilize the Defender's high HP to absorb most of the damage for your fragile teammates to safely escort them to an enemy goal or save them from a losing fight. Moreover, Defenders are extremely helpful in protecting teammates when you are fighting Boss Pokemon.

Stick to the Frontlines

During clashes, it's best if you position yourself between your allies and the enemies. This way, your teammates will have an easier time cranking out damage while enemies will have a harder time reaching them.

Pair Up With an Attacker

Defenders are generally ineffective offense-wise on their own. Teaming up with an Attacker can help you farm experience and Aeos Energy faster, while also granting you firepower support when it comes to fighting the enemy team's Pokemon. This also allows you to share experience so you can level up faster while having extra offense against opponents.

Build on their High Endurance 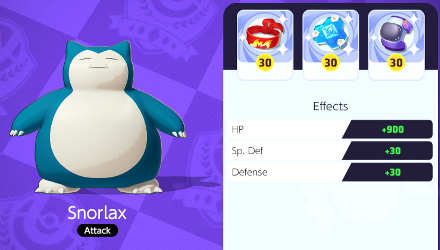 Although Defenders have the highest endurance stat in the game, equipping items that improves their innate tankiness makes them more effective since they need to soak as much damage as they can from enemies.

If you're new to the game and want to focus on playing Defenders, priotize acquiring and upgrading items that increases HP, defenses, and survivability.

Top Lane Defenders should focus on preventing opponents from scoring as much as possible by using moves that hinder their movement or push them back entirely. Then, when the time is right, you should stick close to your lane partner and score goals. 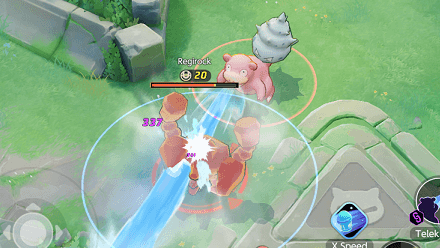 Defenders can help take the bulk of the damage dealt by Regirock, Regice, or Registeel when going for the objective. In defending, it is important to always keep the goal within reach as you defeat wild Pokemon in the wider spaces of the Bottom Lane. It is best to coordinate with your teammates when you are going to push a lane or start a fight.

Defender Pokemon have the highest Endurance rating compared to other Pokemon roles in the game. They can sustain high amounts of damage before falling into battle.

Because of their size, their moves are all about causing hindrances to opponents. When battles get too cluttered, a big strategic slam from a defender could create an opportunity to push or retreat when needed.

Even with the size advantage, Defender Pokemon have the lower damage output compared to other roles. This makes it hard for them to take out wild Pokemon and opponents without proper support.

Defenders have low mobility, so in addition to going places slower, getting out of a fight will be significantly harder than getting into one. They need to commit to a lane and keep the opponent in check as much as possible.

Defenders are large, tough Pokemon with high endurance. They focus on protecting allies and preventing opponents from scoring goals.

Why Should You Play Defender?

The Defender role is for players who want to support their team by being the frontline Pokemon to lead charges and defend goal zones. Defenders are similar to the 'Tank' archetype found in other MOBAs, which are very useful in absorbing most of the damage and for providing crowd control.

In order for us to make the best articles possible, share your corrections, opinions, and thoughts about 「Defender Guide: How to Play Defenders | Pokemon UNITE」 with us!