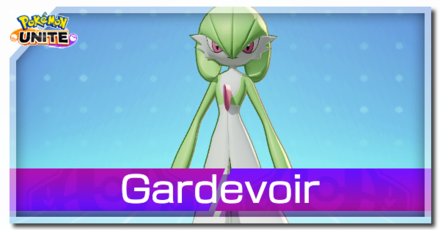 The best guide on how to play Gardevoir in Pokemon UNITE for Nintendo Switch and Mobile. Check here for the best builds, Held and Battle items, movesets, as well as the latest nerfs, buffs, counters, matchups, and more!

The Best Build for Gardevoir is the one with the gold crown!

This build has everything you need to turn Gardevoir into a deadly ranged Pokemon. Your gameplay should consist of providing long-ranged stuns for your team using Moonblast and following up with Future Sight for more damage. Stunning targets with this combo make it easier for your allies to secure kills. Once you upgrade Future Sight, you can now provide constant long-ranged AoE damage using it since its cooldown resets when it hits an enemy. To top it all off, use Fairy Singularity during team fights to set up kills and win the clash.

Eject Button is your main survivability tool for when you need to reposition quickly. You can also equip X Speed for a similar effect. These mobility items should only be used defensively, as Gardevoir is extremely fragile and lacks proper mobility moves. Slow Smoke is also a good alternative, but may be more effective depending on your team's composition.

Your Boost Emblem loadout should consist of 6 Green Emblems to maximize your moves' damage and 4 Emblems of any color. Equip Emblems that improve Sp. Atk since the build is centered on dealing high burst damage. You can freely trade Attack and Critical-Hit Rate.

This is an all-in damage build that forgoes defensive items for more firepower. Your gameplay should be stunning targets using Moonblast and following up with Psyshock, causing at least two pulses of Psyshock to hit. Use your superior cast range to bombard targets from a safe distance, retreating when they try to get close.

The combination of Choice Specs, Wise Glasses, and Shell Bell gives Gardevoir a significant amount of Sp. Atk., boosting its moves' damage output drastically. Shell Bell, in particular, also gives healing opportunities and a decent cooldown reduction effect. If you want to take it one step further, you can substitute any item for a Sp. Atk. Specs. However, keep in mind that you have to stack the item's bonuses first to fully take advantage of it. It is best to run the item only when you have a coordinated team.

Eject Button is the best choice for your battle item, providing the only means of escaping or repositioning when needed. You can also opt for X Attack to further increase Gardevoir's lethality in battle.

Your Boost Emblem loadout should consist of 6 Green Emblems to maximize your moves' damage and 4 Emblems of any color. Equip Emblems that improve Sp. Atk since you'd want to go all-in on Sp. Atk damage. You can freely trade *Attack and Critical-Hit Rate.

This build runs both Psyshock and Psychic. This moveset offers the lowest amount of cooldowns, especially when upgraded. Your gameplay should consist of constantly bombarding the opponent from afar with Psychic, then following up withPsyshock. The moveset is a bit hard to aim, so make sure you make your shots count.

Running both Shell Bell and Energy Amplifier provides a significant amount of cooldown reduction, on top of their extra effects. Choice Specs will be your core damage, giving your moves a decent damage boost each time you hit with a move.

Eject Button gives Gardevoir a way to disengage or reposition from a fight. You can also opt for X Speed for a similar effect.

Your Boost Emblem loadout should consist of 6 Green Emblems to maximize your moves' damage and 4 White Emblems for additional HP. Equip Emblems that improve Sp. Atk since you want to deal as much damage as you can with your moves. You can freely trade Attack and Critical-Hit Rate.

This moveset is the simplest and safest combo to execute. Cast Moonblast to stun an opponent, then immediately follow up with Future Sight. This garuantees that Future Sight hits, resetting its cooldown for another burst.

Gardevoir's moves have incredible synergy with each other, allowing you to choose any combination without sacrificing much. You'll still be able to deal damage from a long range regardless of which combination you chose.

Which Moveset Do You Think Is Best For Gardevoir?

How to Play Gardevoir

Gardevoir is an attacker reaching their potential in mid to late game, similar to Cinderace. Due to this, she suffers from an extremely weak early game. Stay away from enemies and only try to help out with poke from your Confusion.

Play Near Your Goal Zone or in Grass

During the early game where Gardevoir is weakest, enemy Speedsters and All-Rounders will try to abuse this by being aggressive. Avoid extending in the main lanes and safely farm near your Goal Posts or in grass. Unless you have ample back up, or can confirm a KO, be prepared to use Teleport defensively. Otherwise, attack from long distances if your allies are fighting.

Since Gardevoir is a fragile Pokemon, it's best to utilize your moves' long cast range and deal damage from a safe distance, especially during fights. Try to stay behind tanky allies like Snorlax and let them soak the damage while you use your moves from afar.

Another use for Gardevoir's long cast range is stealing boss Pokemon like Regirock from your enemies. It's best to use Psyshock or Future Sight since they deal the most damage.

Maximizing what damage you can do is essential to help your team during the laning phase. Since Teleport boosts the next basic attack, hitting the opponent with boosted attack then teleporting for another boosted attack allows you to surprise enemies with a small amount of Burst. Follow this up with Confusion for more damage.

Psyshock is a unique skill that fires 3 AoEs that can be aimed while moving so make sure to reposition while using this skill to maximize its damage. It also reduces the cooldown of both your moves by 1 second per hit, so maximizing its duration is a must for mastering Gardevoir.

Abilities Can Be Cast While Using Psyshock

You can also use your other move while channeling Psyshock, allowing you to use Psychic while casting Psyshock or nuke enemies with Fairy Singularity.

Use Fairy Singularity to Start Team Fights or Trap Enemies

Since Fairy Singularity draws in enemies in the affected area, it's a great setup tool for teamfights. Use it in situations where teams clash in goal zones or when taking on objectives.

Gardevoir has some nifty tricks up its sleeve but has some fragile defenses as well. A single well-timed combo and some follow-up auto-attacks will make short work of Gardevoir.

Even Matchups for Gardevoir

When facing off against even matchups, always maintain your distance from opponents. Gardevoir relies on its high damage output to stave off and, possibly, knock down opponents before they can attack. Moreover, Gardevoir lacks mobility moves, so try to make use of your stuns and slows to even the playing field.

Disable and Burst Down

Fight Through the Defenses

Gardevoir can deal massive amounts of long-ranged damage while being able to disrupt them with stuns and slows.

Pin Down with Diables

Susceptible to Getting Nuked

In order for us to make the best articles possible, share your corrections, opinions, and thoughts about 「Gardevoir Guide: Builds and Best Items | Pokemon UNITE」 with us!