Sp. Atk. Specs Effect and How to Get | Pokemon UNITE 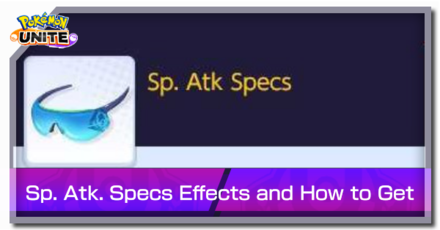 Scoring a goal with Sp. Atk. Specs equipped will increase your Sp. Attack stat by a flat amount, regardless of how many points you score per goal. This effect can stack up to 6 times.

There's also no cooldown for this item's effect upon scoring a goal, meaning you could do something like scoring 6 goals within 30 seconds and still gain the bonus stat per goal.

If a Pokemon's Boosted attack has a Sp. Attack stat like Pikachu, the effect of Sp. Atk. Specs will be applied only to the final attack.

Does Not Raise Attack Stat

Effect Lasts Until End of the Match

How to Get Sp. Atk. Specs

All Builds for Sp. Atk. Specs

We first took note of a move's initial damage without stacking the item yet. Then, we kept scoring a goal and noting the move's damage using the Substitute doll until it stops increasing.

After testing, we found that Sp. Atk. Specs can only be stacked up to 6 times.

We also tested if the amount of points scored affected the damage increase effect. We also used a Level 15 Sp. Atk. Specs for this test.

We first took note of the move's initial damage without stacking the item. We then scored two points and measured the move's damage using the Substitute doll, respectively. We left the Practice Area and entered a new Practice game to reset the test. We repeated the previous steps using the same Pokemon and move but scored fifty points instead. Lastly, we compared the damage from the two-point test with the fifty-point test and see if there is a difference.

After testing, we found that there were no difference in damage from the two tests. This means that the amount of points scored won't affect the damage increase from the item.

The purpose of this test is to see if the damage stacks from the item resets upon the Pokemon's death. We used Gengar as our test subject for the test.

We first noted the initial damage of the move without stacking the item yet using the Substitute doll. Then, we scored one goal to stack the item once. Afterwards, we let wild Pokemon defeat our Pokemon. Upon respawn, we measured the move's damage again to see if it decreased or remained the same.

After testing, we found that the damage stacks does not reset upon the Pokemon's death and remains up to the end of the match.

This test is to verify if the Sp. Atk. stack increases the attack damage of Special Attack type Pokemon. We used Venusaur, a Special Attack Pokemon, as our test subject.

After testing, we found that the Sp. Atk. bonus from the item does not increase a Special Attack type Pokemon's attack damage.

We also tested if the Sp. Atk. bonus increases the boosted attack damage.

After testing, we found that the boosted attack of the Special Attack type Pokemon increased each time the item was stacked. This effect can be powerful for Pokemon that can unleash boosted attacks at a faster rate, or have means of getting boosted attacks freely like Alolan Ninetales.

Due to the positive result of the Boosted Attack Test above, we decided to do the same test on Attack type Pokemon to see if it works.

In order for us to make the best articles possible, share your corrections, opinions, and thoughts about 「Sp. Atk. Specs Effect and How to Get | Pokemon UNITE」 with us!