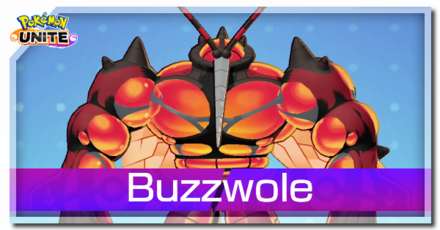 The best guide on how to play Buzzwole in Pokemon UNITE for Nintendo Switch and Mobile. Check here for the best builds, Held and Battle items, movesets, as well as the latest nerfs, buffs, counters, matchups, and more!

This is an all-offense build that utilizes the buffs and debuffs of Lunge, the shield from Superpower, and effects of Beast Boost to help you brawl against enemies.

Muscle Band, Scope Lens, and Weakness Policy provide the damage, attack speed, and HP you need to beat down your opponents with your attacks. However, if you don't mind having low critical-hit rate, just replace Scope Lens with Focus Band for defense.

X Attack further improves your brawling potential by increasing your damage and attack speed. However, if you want more mobility equip Eject Button or X Speed.

Your Boost Emblem loadout should consist of 6 Brown Emblems for maximum damage and 4 White Emblems for additional HP. Equip Emblems that improve Attack or Critical-Hit Rate since the build is centered on your attacks. You can freely trade Sp. Atk and Movement Speed.

This build is centered on isolating a target using Smack Down and keeping it in place with Superpower. Make sure to also follow up with attacks after you perform the combo.

Muscle Band helps you fill up your muscle gauge much faster with your attacks. Attack Weight increases your overall damage output, particularly your moves. Be sure to fully stack the item as early as possible. Focus Band increases your static defenses and provides a survivability tool as you grapple enemies.

Eject Button helps you get the best position quickly to do your combo.

Your Boost Emblem loadout should consist of 6 Brown Emblems for maximum damage and 4 White Emblems for additional HP. Equip Emblems that improve Attack or HP since you'd want to balance damage and durability for the build. You can freely trade Sp. Atk and Movement Speed.

This is a defensive build centered on dealing and tanking damage using Lunge and Life Leech. You'll also rely on Beast Boost's effects although you'll depend on assists rather than kills to trigger it.

Weakness Policy is your core item, providing HP and damage. Focus Band and Buddy Barrier gives you durability and survivability, allowing you to tank damage during fights.

Potion adds another layer of healing on top of Life Leech, prolonging your life.

Your Boost Emblem loadout should consist of 4 Blue and Purple Emblems for better defenses and 2 White Emblems for a bit of HP. Equip Emblems that improve Sp. Def, Defense, or HP since you need to be as durable as possible for the build. You can freely trade Sp. Atk, Critical-Hit Rate, and Movement Speed.

This is a lane build that emphasizes on boosting Buzzwole's HP and Attack stats via scoring to create some momentum in the late-game. You'll be using Smack Down or Lunge and Superpower as your moveset. If there are a lot of Physical Pokemon on the opposing team, it's best to learn Lunge for the Attack stat reduction effect. Get aggressive in lane once you get Superpower.

Attack Weight and Aeos Cookie are your core items for the build, increasing both your Attack stat and HP, respectively, as you score. Try to fully stack them as soon as possible. Weakness Policy adds more Attack and HP, and works well with the build's aggressive playstyle.

Eject Button is the default Battle Items for the build, allowing you to quickly reposition to perform your combos. However, you can also equip X Speed for a similar effect.

Your Boost Emblem loadout should consist of 6 Brown Emblems for maximum damage and 4 White Emblems for additional HP. Equip Emblems that improve Attack or HP since those stats are central to the build. You can freely trade Sp. Atk and Movement Speed.

If you want more sustain and a direct way of pinning down opponents, learn Leech Life. However, since Leech Life is susceptible to getting canceled through stuns and an Eject Button, it will be best if you can team up with friends or a squad so you can coordinate your moves better.

If you want a more single-target, bursty playstyle, learn Smack Down instead of Lunge to get more up time of disables when combined with Super Power.

Which Moveset Do You Think Is Best For Buzzwole?

Fill Up the Muscle Gauge with Moves

Perform attacks and use the moves listed above to quickly fill up the Muscle Gauge. When your Muscle Gauge is full, your attacks become stronger.

Moves that Consume the Muscle Gauge 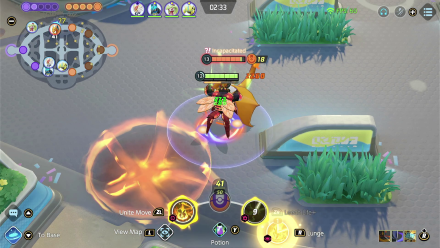 Buzzwole's whole kit revolves around isolating targets and engaging in brawls. Before you do your combos, however, be sure to take advantage of Buzzwole's disabling moves first to get a better shot of landing your attacks.

Superpower allows you to displace one enemy and put them in a disadvantageous position. It is a great way to isolate single targets for you and your allies to pick them off easily. Since you will be body slamming opponents in a specified direction, it is best to pick up targets and slam them away from their goal zones to make it harder for them to fight back.

Using Leech Life on a target will pin them down for a short time, enough for your allies to follow up with their attacks. Buzzwole will also be able to recover a decent amount of HP while the move is active. Use the move to shut down other All-Rounders or trap highly mobile Speedsters so that your team can take them out of the fight quickly.

One thing to note is that opponents incapacitated by Leech Life can break free from the move using an Eject Button. Since this interaction acts as a direct counter to the move, it is best to take note of opponents who are running the Battle Item during the initial loading screen before the match starts. 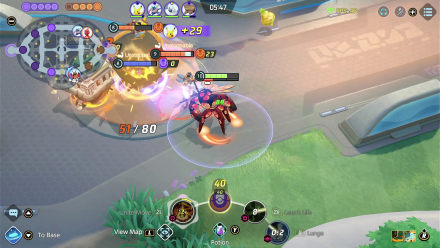 Buzzwole's passive, Beast Boost, increases its movement speed and attack speed each time it defeats or assists in defeating an opposing Pokemon. Staying active throughout the game either by hunting targets or sticking with your allies is the best way to maximize its passive.

Use Unite Move as a Finisher

Buzzwole is invulnerable for a short time while airborne during Ultra Swole Slam. Coupled that with area of effect damage, then you got yourself a strong Unite Move that can tank multiple opponents. Moreover, Ultra Swole Slam will seek out an opponent with the lowest HP, making it great for landing the last hit without getting interrupted and synergizing with Beast Boost.

Since Buzzwole needs to get close to its target first to perform its combos, you need to position properly before initiating. This is especially true when you're using Smack Down.

If you use Superpower on targets that have the Unstoppable status effect, you can still cause damage even if you can't lift them. This is because the move's animation continues even when your target has immunity, dealing damage as a result.

Given this, the move isn't entirely useless against Pokemon that can gain immunities.

Moreover, this interaction also happens against Boss Pokemon like Drednaw and Rayquaza.

This set of combos utilizes Lunge or Smack Down to fill up the Muscle Gauge and enhance Superpower's damage and its displacing capabilities.

Hard Counter with Kiting and Disables

Since Buzzwole needs to get to melee range to perform its combos, Pokemon that can disable or kite it from range stops it from doing any damage.

Even Matchups for Buzzwole

Although Buzzwole can take on these Pokemon, they have means of preventing it from doing its combos. Evading or anticipating their moves is key to getting the upper hand against them.

Disrupt Their Combos with your Own

Strike First Before they Gain Immunity

These Pokemon are easy matchups for Buzzwole either because they don't have means to escape Buzzwole's combos or are too fragile to survive it.

Take Your Beats and Annihilate

Pressure Until They Fall

Upcoming Pokemon dates are in UTC+0.

In order for us to make the best articles possible, share your corrections, opinions, and thoughts about 「Buzzwole Guide: Builds and Best Items | Pokemon UNITE」 with us!