X Attack Effect and How to Get | Pokemon UNITE 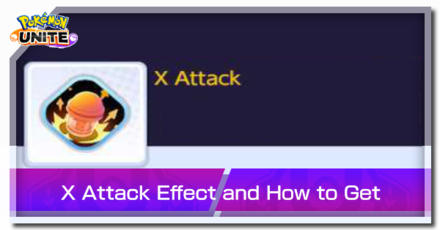 X Attack works beautifully when paired with Pokemon holding a Rapid-Fire Scarf. The attack speed effect provided by that Held Item stacks with X Attack's attack speed bonus so you can deal an insane amount of standard attack damage!

Rapid-Fire Scarf Effect and How to Get

How to Get X Attack

When to Use X Attack

Use X Attack before going all-in with your attacks and Moves to deal a greater deal of damage to enemy Pokemon. It's particularly lethal in the hands of burst damage Pokemon such as Absol or Zeraora as the added damage boost lets them instantly obliterate squishy opponents with a single combo. You can also use it to increase damage in a teamfight, or gain the upper hand in a 1-on-1 duel with an enemy Pokemon.

Use X Attack when defeating wild Pokemon to speed up the process, and get levels as fast as possible. Using it early on is not a problem since players are more focused on farming in the early phases of a match.

The test was conducted in the Practice Area using Wigglytuff, which has a physical attack, and Alolan Ninetales, which has a special attack, to raise the attack and special attack for a duration. The damage was computed with and without the X Attack effect at level 15 against a Pokemon with no Held Items. The test has shown that the increase differs depending on the move.

Basic Attack Increased from 1.1 to 1.2 Times, and Moves Vary

As a result of the test, it is confirmed that the healing from Shell Bell increases when X Attack is activated. Pikachu is one of the ideal Pokemon to pick that can maximize this interaction. Having the bonus attack and special attack from X Attack, the enhanced healing from Shell Bell, and Pikachu's low cooldown moves increases not only its kill potential but also its sustainability within the 8 second duration of X Attack.

Shell Bell Effect and How to Get

In order for us to make the best articles possible, share your corrections, opinions, and thoughts about 「X Attack Effect and How to Get | Pokemon UNITE」 with us!