How to Check Player Levels and Kills | Pokemon UNITE

★ Check out Espeon's Best Builds!
┗ Get the UNITE License for FREE in the Espeon Event!
★ Desync bug now fixed as of Version 1.5.1.5!
★ Collect coins and exchange them in Flower Coin Exchange!
★ Check out UNITE Club Membership's weekly free trial Licenses and Holowers! 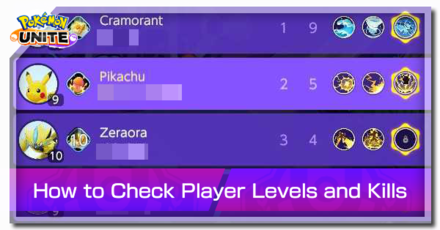 The best way for players to know how well they're doing during a match is by checking their in-game stats. This is a guide on checking player levels and kills in Pokemon UNITE. Read on to learn the different ways to check player stats in matches, and what those stats refer to.

How to Check Player Levels and Kills 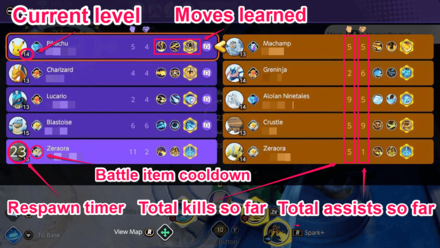 By pressing the + button during a match, players can check all players' stats. The stats shown are kills, assists, and level. Players can also see the respawn timer of Pokemon that are currently dead, the moves each Pokemon have learned, and the cooldown timer of battle items. 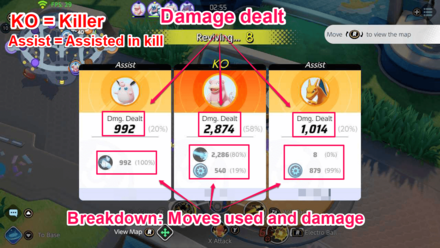 By pressing the X button when a Pokemon has died, players can see the breakdown of their death. It shows which enemy Pokemon defeated their Pokemon. It also shows which moves the enemy Pokemon used, and how much damage they dealt. 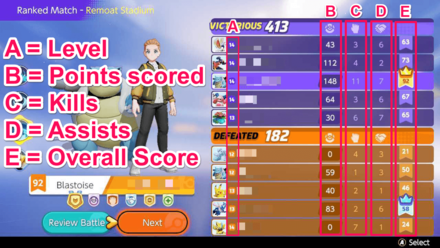 Players can also see the final match stats after each game. The stats shown are total kills, assists, points, the Pokemon's level, and the overall score. 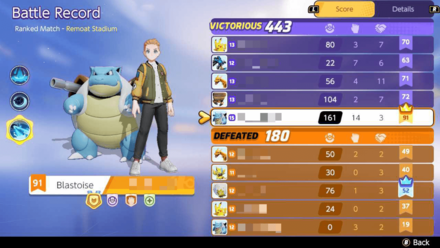 Players can check their match history and the stats of each match in Battle Record in their Trainer Info.

The stats shown are similar to the scorescreen after a match. However, the difference is that players can't view the point breakdown of that match anymore, and players can see the total damage dealt, taken, and HP recovered.

How to Check Match Stats in Battle Record

What Player Stats are Recorded for Each Match?

The game records the total amount of points a player scored for each match. To score points, players must collect Aeos Energy from wild Pokemon, then press X in the enemy's goal zone.

Currently, there is no way to check the team's score during matches. It is only after the match can players see their team's score. However, there are simple ways players can do to estimate how many points their team has scored while playing. 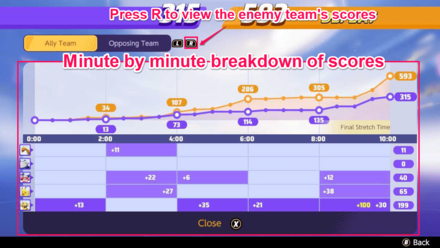 Players can also see a minute by minute breakdown of each team's score by selecting Review Battle in the scorescreen after a match. It shows how many points each player scored at a certain time.

Kills are also recorded in each match. Although the game focuses more on scoring points, getting kills still play a huge role in winning the game.

Deaths are not Recorded

Unlike other MOBA games, Pokemon UNITE does not show or record deaths in each match. Deaths do not show up at any stats screen, not even during matches. It's not known why deaths are not recorded. 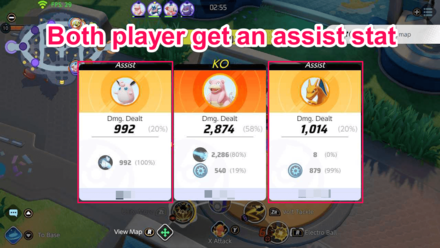 Assists are another recorded stat in each match. They are rewarded to players that have dealt damage to a recently defeated Pokemon but is not the killer. However, the exact mechanic is not yet known. 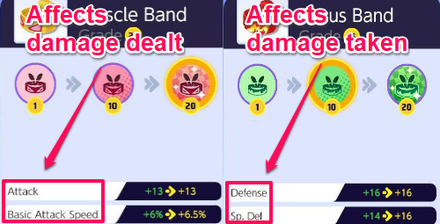 Held items modify a Pokemon's stats during battles. Certain stats directly affect the damage dealt, and damage taken by a Pokemon. The higher the item level, the greater its effect becomes.

The HP recovered stat can also be seen along with the damage dealt and taken. This refers to the total HP a player has recovered in that match. This can come from various sources, such as picking up yellow berries, using moves, and healing from items.

How to Recover HP

The overall score refers to the overall contribution of each player during the match. It is not known how the overall score is calculated. However, it's speculated that it must have something to do with the existing stats like kills, and points.

The player with the highest overall score from each team is awarded the MVP badge.
Badges and Medals Guide: Results Screen Explanation

Post (0 Comments)
Opinions about an article or post go here.
Opinions about an article or post
We at Game8 thank you for your support.
In order for us to make the best articles possible, share your corrections, opinions, and thoughts about "How to Check Player Levels and Kills" with us!
When reporting a problem, please be as specific as possible in providing details such as what conditions the problem occurred under and what kind of effects it had.