Season 4 Battle Pass: List of Rewards | Is it Worth It? | Pokemon UNITE 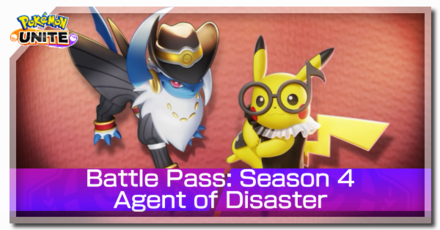 The Season 4 of the Battle Pass called Agent of Disaster in Pokemon UNITE for the Nintendo Switch and Mobile brings new Trainer Outfits and Holowear!. Read on to know if the Battle Pass is worth it, all season 4 Battle Pass rewards, Battle Pass Prize Box, all missions, season 4 end date, and more!

Season 5 Battle Pass started immediately after so check it out!

Season 4 Battle Pass: Is It Worth It? 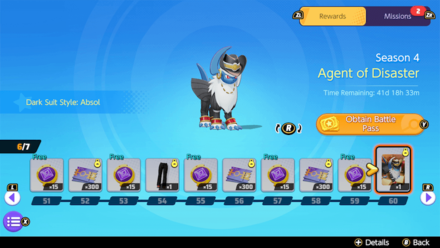 The free version of the battle pass already gives a total of 1700 Aeos Tickets and 255 Item Enhancers.

Buying the Battle Pass will give you an additional 2800 Aeos Tickets, 120 Item Enhancers

In our opinion, the value that you get for buying it really isn't that appealing. However, if you're a fan of either Absol or Pikachu, you might want to consider buying it! Absol especially has some unique animation changes to their Unite Move and the teleport function. 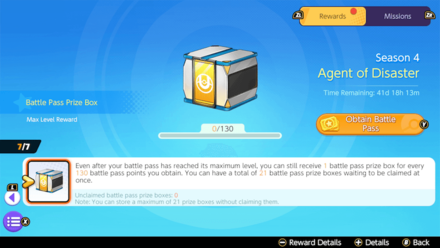 The following are mission types and their rewards for the sixth week of Season 04:

A new set of missions called Special Missions was added in Update 1.4.1.2! The missions here provide a lot of Battle Pass points which can be passively done simply by playing the game.

Post (1 Comments)
Opinions about an article or post go here.
Opinions about an article or post
We at Game8 thank you for your support.
In order for us to make the best articles possible, share your corrections, opinions, and thoughts about "Season 4 Battle Pass: List of Rewards | Is it Worth It?" with us!
When reporting a problem, please be as specific as possible in providing details such as what conditions the problem occurred under and what kind of effects it had.