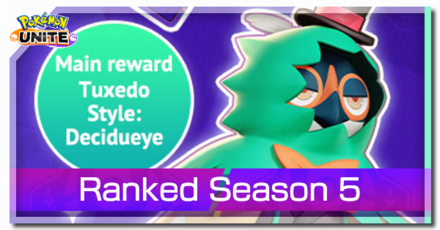 A new Pokemon UNITE ranked season is slated to end on September 2, 2022! Find out when will Ranked Season 5 end, and and the rewards you will get for the current ranked season!

When Will Ranked Season 5 End? 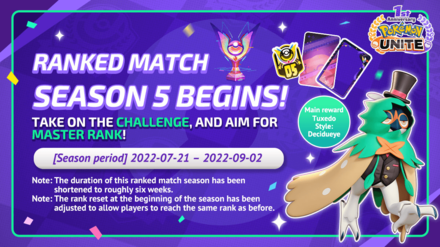 It has been announced that Ranked Season 5 will have a shortened duration - roughly 43 days only.

This is signifcantly shorter than the Ranked Season we usually have but UNITE assured that they have adjusted the rank reset so players could reach the same rank in a shorter time.

No Trainer Skin for Season 5

Sadly, there is no Trainer Skin reward for this ranked Season. It is still unknown if this will be the same way for the uopcoming seasons!

In order for us to make the best articles possible, share your corrections, opinions, and thoughts about 「Ranked Season 5: End Date and Rewards | Pokemon UNITE」 with us!