Season 3 Battle Pass: List of Rewards | Is it Worth It? | Pokemon UNITE 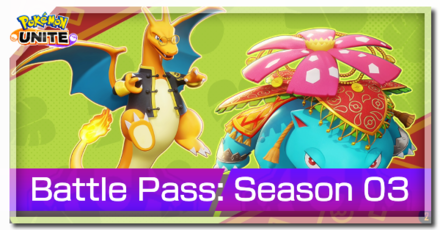 The Season 3 of the Battle Pass in Pokemon UNITE for the Nintendo Switch and Mobile brings new Trainer Outfits and Holowear! Read on to know if the Battle Pass is worth it, all season 3 rewards, prize box, all missions, start and end date, and more!

The Season 3 Battle Pass has ended on December 20, 2021 at 11:59AM UTC! Subsequently, Battle Pass Season 04 started immediately after Season 03!

Season 4 Battle Pass: List of Rewards | Is it Worth It?

Season 3 Battle Pass: Is It Worth It? 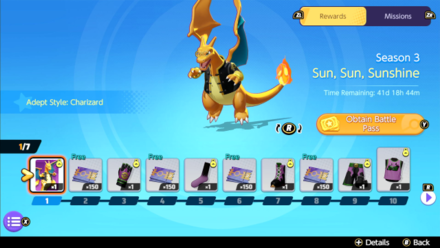 The free version of the battle pass already gives a total of 1700 Aeos Tickets and 225 Item Enhancers.

Buying the Premium Battle Pass will give you an additional 2650 Aeos Tickets, 60 Item Enhancers.

In our opinion, the value that you get for buying it is highly appealing - most especially if you're a fan of either Charizard or Venusaur! Venusaur especially has some unique changes to their Unite Move and retreat animations! 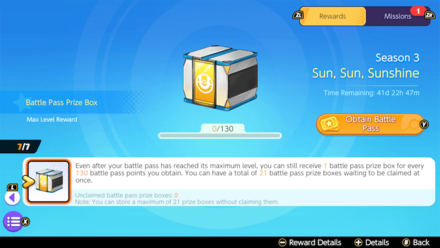 Daily missions are reset every day at 5 pm PST. This will end the missions from the previous day. We will add new missions everyday into this pool. You can earn a total of 80 points per day so try finishing the daily missions at all times.

The following are mission types and their rewards for the sixth and final week of Season 3:

The following are mission types and their rewards for the third week of Season 3:

In order for us to make the best articles possible, share your corrections, opinions, and thoughts about 「Season 3 Battle Pass: List of Rewards | Is it Worth It? | Pokemon UNITE」 with us!