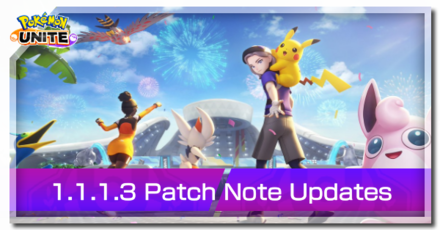 Welcome to the Latest Pokemon UNITE's 1.1.1.3 Patch Note update! Read on to see all the latest changes to Pokemon Unite, all the Buffs, Nerfs, Bugfixes, and all the balance changes in the game!

No Pokemon were buffed in this update.

The only known tweak made in this patch is the bugfix with Muscle Band when equipped by Charizard.

There was no comprehensive list of all changes made in patch 1.1.1.3. The only information that was available was the release of the new attacker Pokemon Gardevoir, and a bugfix to the issue of Muscle Band not acting as intended when equipped by Charizard. We found out that this bug fix with Muscle Band is most likely a nerf to Charizard, hurting its viability overall.

Gardevoir is set to release in this patch as the newest addition to the Pokemon roster. Gardevoir is a Ranged Attacker Pokemon that has amazing AOE damage, long attack range, and a powerful Unite Move.

Along with the release of Gardevoir, a bugfix is made regarding the issue of Muscle Band not acting as intended when equipped by Charizard.

Register as a member and get all the information you want. (It's free!)
Login
Opinions about an article or post go here.
Opinions about an article or post
We at Game8 thank you for your support.
In order for us to make the best articles possible, share your corrections, opinions, and thoughts about "1.1.1.3 Patch Note Updates" with us!
When reporting a problem, please be as specific as possible in providing details such as what conditions the problem occurred under and what kind of effects it had.