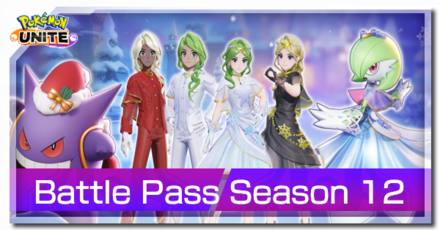 Season 12 of the Battle Pass in Pokemon UNITE for the Nintendo Switch and Mobile brings new Trainer Outfits and Holowear! Read on to know when Season 12 Battle Pass will end, all the rewards, new features, and more!

Take a look at what's in store for Battle Pass Season 12 in this trailer.

From here, rewards will only be given out in increments of 10. The current limit is at Level 120.

Season 12 Battle Pass: Is It Worth It? 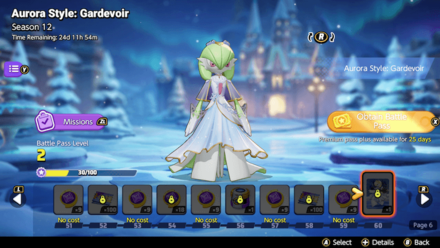 The free version of the battle pass already gives a total of 500 Aeos Tickets, 162 Item Enhancers, and 120 Aeos Coins.

Buying the Battle Pass will give you an additional 1100 Aeos Tickets, 108 Item Enhancers, 120 Aeos Coins, and some Boost Emblem Boxes that contains random Pokemon Boost Emblems!

Buying the Battle Pass will give you an additional 1100 Aeos Tickets, 108 Item Enhancers, and 120 Aeos Coins. In addition, paid Battle Pass is worth it if you're a fan of either Gengar or Gardevoir because you're gonna get their special, limited edition Holowears.

You're also going to get additional rewards if you reach past level 60! If you're going to ask us, this Battle Pass is worth it!

In Season 12, it seems Pokemon UNITE has phased out the Battle Pass Prize Box and instead opted on giving away additional Trainer Skins for levels above 60!

We are currently compiling all daily missions everyday! Stay tuned for more updates!

The following are mission types and their rewards for the fourth week of Season 12:

Special Missions are time-limited missions that gives more BP when completed. Complete these missions and get 1000 points!

In order for us to make the best articles possible, share your corrections, opinions, and thoughts about 「Season 12 Battle Pass: End Date and Rewards | Pokemon UNITE」 with us!