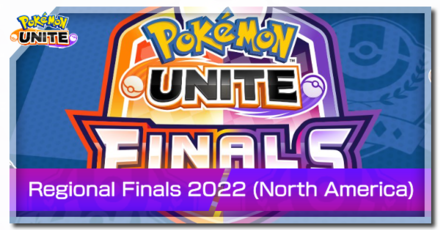 Want to know a quick summary of the things that happened in the North America Regional Finals? Read on to see the most used Pokemon, the Pokemon with the best win rate, the most used battle and held items, lanes for each Pokemon, where to watch the stream, as well as highlights that defined this tournament! 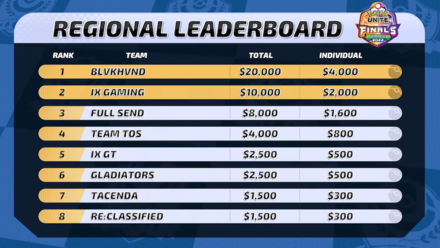 After months of grueling competition, BLVKHVND is the top team in North America proving themselves worthy to join the best teams in London for the very first Pokemon UNITE World Championships!

In addition to that, the team will also take home USD$20,000 in prizes!

The North America Regional Grand Finals is not without any excitement - IX GAMING stood its ground in the Grand Finals against BLVKHVND and forces a Grand Finals bracket reset.

Though BLVKHVND ultimately won in the end, this is proof of IX GAMING's resilience and determination so watch out for them in the World Championships!

In addition to the awesome prizes they got for being the top two teams in the North America Regional Finals, both of these teams will represent North America for the Pokemon UNITE World Championships in London: 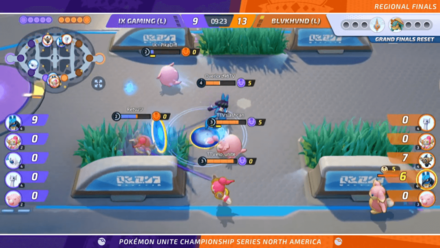 Much like in the JP Regional Finals, Blissey and Hoopa continue to be the go-to support duo for teams in this tournament. Both Pokemon have a jaw-dropping 100% pick rate. 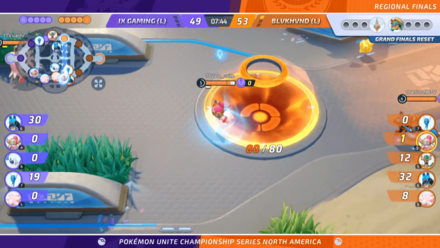 Teams pick Hoopa mainly for its ability to quickly teleport its allies around the map using Hyperspace Hole and Rings Unbound. This proves to be extremely effective in various situtations, such as pushing lanes, securing Drednaw and Rotom, and winning teamfights. 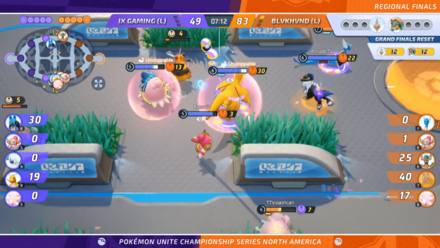 Blissey, on the other hand, is played as the team's full-on support, healing, shielding, and buffing allies. Apart from this, it outshines other Supporters due to it having the largest HP pool in the game, making it a tough supporter to take down. 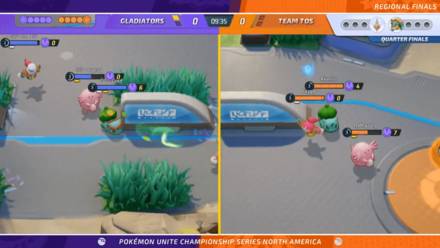 The Tri-Lane seems to be the staple strategy for NA teams in tournaments. Each game has teams following the same 1-1-3 lane format. 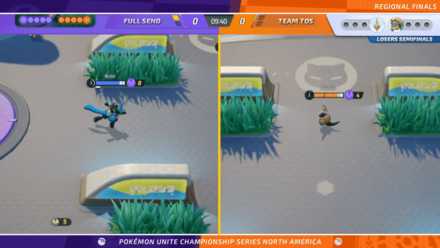 Part of following a Tri-Lane format is having one Pokemon take the top lane. Teams mostly pick Lucario to take the top lane alone and take advantage of all the exp. there. However, they also pick Tsareena or Trevenant as alternatives to Lucario. 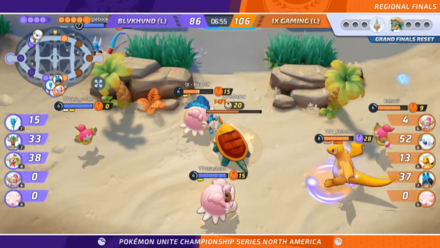 The goal of the Tri-Lane strategy is to try to secure Drednaw, particularly the first time it spawns. By doing so, whichever team secures Drednaw each time it spawns gets a huge level and power advantage during the late game, giving them a better chance of winning team fights. 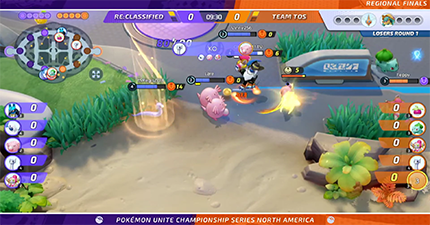 While everybody understands the importance of Drednaw to win matches, teams have taken this a step further by pushing heavily on bottom lanes early on in the game.

Some teams have even gone so far as to deploy 4 Pokemon into the bottom lane to successfully secure Drednaw, leaving Lucario to solo the top lane. 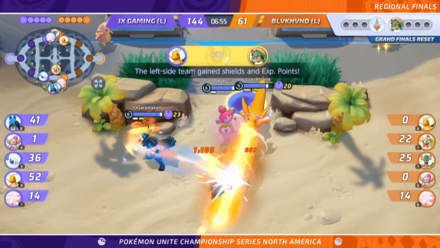 Similar to JP Regional Finals, Dragonite returns to the NA competitive scene after being missing in action for a while, garnering an impressive 83% pick rate in the tournament.

Teams pick the Pokemon mainly because of its high burst damage via Dragon Dance and Hyper Beam, something that is particularly effective in taking objectives like Drednaw.

Tsareena saw an increase in pick rates because of its ability to shut down single targets with its Queen Ascendant. We saw multiple plays where key Pokemon like Dragonite and Absol were cut off from their team during decisive team fights. Coupled with multiple Stomp activations via Queenly Majesty, Tsareena was able to quickly dispose of multiple targets after getting buff from its Unite move.

Venusaur and its powerful Petal Dance and Giga Drain combo makes a return in this tournament. This time, the Pokemon was placed in a support role, utilizing its high sustain with an emphasis on defending goal zones and dealing incidental damage with its AoE moves. Players also equipped Energy Amplifier to get more damage out of Verdant Anger for potential objective steals and long-ranged snipes. 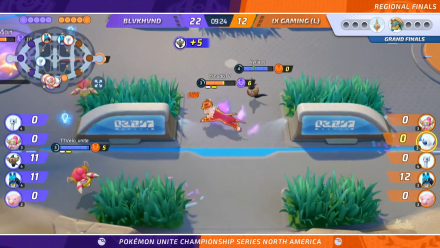 Absol makes a return with its favorite Held Item, Attack Weight. The team IX Gaming focused on aggressively scoring during the early game to get the full stack as fast as possible. The strategy mostly resulted in early knockdowns for Absol, but the increase in attack was worth the trouble as the Pokemon was consistently dealing insane amounts of damage throughout the tournament! 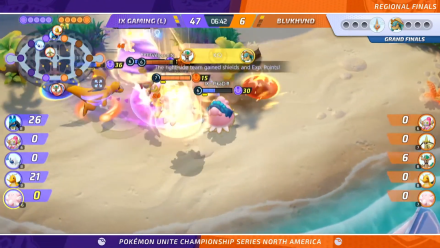 Trevenant saw incredible plays from teams who utilized its strengths. The Pokemon's innately high durability combined with additional HP from each stack of Aeos Cookie allowed it to soak up high amounts of damage during every team fight. Moreover, it was able to sustain enough damage from high burst moves like Hyper Beam and essentially block key Pokemon from securing objectives.

Pokemon not shown here were not picked during Regional Finals North America.

Battle Items not shown here were not picked during Regional Finals North America.

Held Items not shown here were not used during Regional Finals North America.

Pokemon not shown here were not picked during Regional Finals North America. 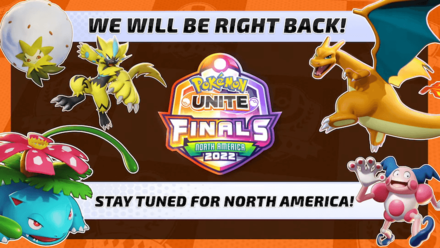 The full livestream for the Regional Finals is available on the official YouTube channel of Pokemon UNITE. The winners of the Regional Finals will go head to head in London for the World Championships! We will surely report the stats for that one too!

For the start of the North American Regional Finals Day 1 stream, skip to the 04:03:10 timestamp.

For the start of the North American Regional Finals Day 2 stream, skip to the 03:57:00 timestamp.

In order for us to make the best articles possible, share your corrections, opinions, and thoughts about 「Regional Finals Analysis (North America) - UNITE World Championship Series | Pokemon UNITE」 with us!