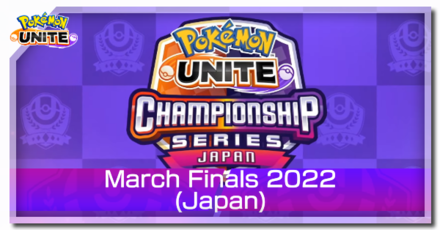 Want to know a quick summary and analysis of the things that happened in the March Final 2022 (Japan)? Read on to see the most used Pokemon, the Pokemon with the best win rate, the most used battle and held items, lanes for each Pokemon, where to watch the stream, as well as highlights that defined this tournament! 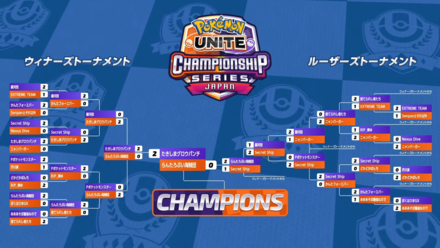 Team たきしまグロウパンチ ver2.0 (Takishima Glow Punch ver2.0) showed a masterful performance, winning the tournament without losing a single match. They stuck with the same strategy throughout the tournament, picking Hoopa and Duraludon as their core Pokemon in every match. 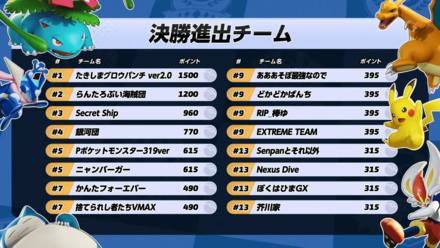 Japanese team names are directly translated using Google Translate. It might be inaccurate, so we apologize for any errors in advance. 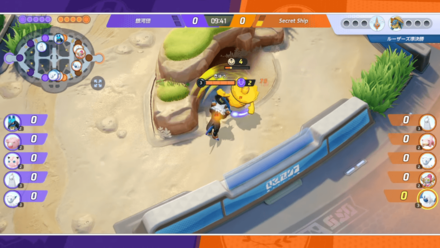 In certain matches, Japanese teams split the jungle camps into an upper half and lower half. Pokemon in the upper half will go to the top lane after clearing the camps while Pokemon in the lower half goes to the bottom lane after clearing camps in that half, transitioning into a duo top lane and tri-lane bottom lane. As a result, teams forgo the jungler role entirely. 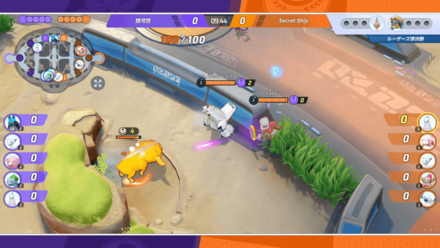 Another interesting strategy Japanese teams do is pairing Hoopa and Duraludon together, typically in the top lane. This startegy works well against the solo-top Lucario strategy since both Pokemon have a range advantage and can punish Lucario out of the lane. 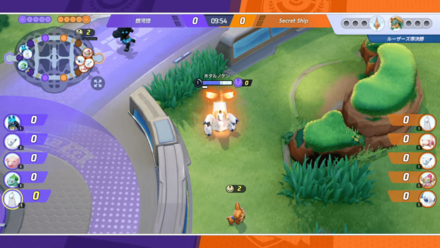 In the event that a team decides not to pick Hoopa, Duraludon takes on the jungler role by default. This ensures that Duraludon reaches its power spike as fast as possible in the hopes of carrying the game. 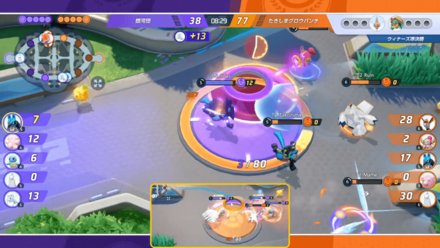 It's generally accepted that the bottom lane takes the highest priority and is the most contested lane compared to the top lane because of the Drednaw objective. Taking out the enemy's bottom goal zone before Drednaw spawns is the best case scenario for most teams. However, in the first game of the first series, the Orange Team rotated to the top lane at 8:50 to take the Vespiquen and Combees camp, then scored huge amounts of points in the top goal zone, almost destroying it as a result. 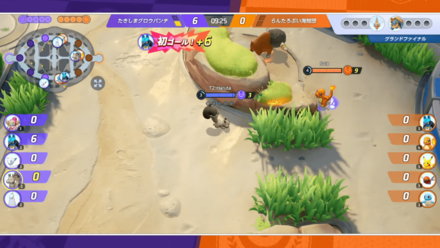 The Greedent counter jungle strategy made a return in the competitive scene ever since the Pokemon received a nerf due to the 1.4.1.7 Update. There were no glaring differences in the strategy's effectiveness before and after the nerf. 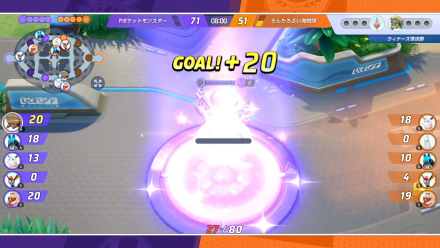 The team らんたろぶい海賊団 (Rantarobui Pirates) is the only team to bring back the Scoring Strategy that was very popular in the last tournament. It consisted of the dependable Score Shield and Buddy Barrier along with Wigglytuff's unite move, Starlight Recital, to generate shields high amounts of shields. Goal-Getter also made a return to supplement the strategy.

Duraludon was added to the composition to add extra firepower to the strategy. It allows the team to effectively stave off low HP opponents like Attackers and Supporters and opens more opportunities for the team to score. 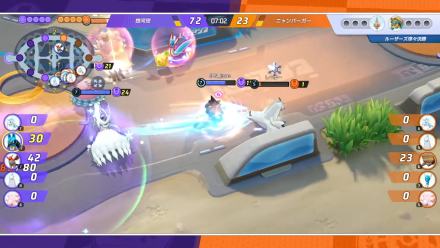 Although the addition of Duraludon made the scoring strategy more formidable in the offense department, it ultimately made the team composition a bit awkward as it leaves the team having little to no recourse when one strategy fails. Opposing teams with Lucario or Greedent where able to freely contest Duraludon without much support. 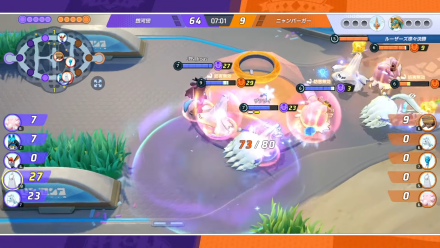 Blissey was used as an alternative to Hoopa as a way to counter Duraludon's burst damage with Dragon Pulse. We saw instances where the constant use of Safeguard was enough to push a lane with a Duraludon in it. Additionally, the combination of Blissey and Alolan Ninetales allowed the team to push lanes more effectively as Aurora Veil and Helping Hand makes Alolan Ninetales into a living turret! 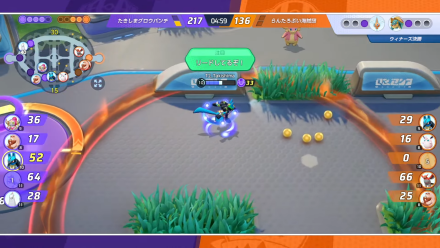 Because of the high usage of Dragon Pulse, teams have opted to run a Full Heal to remove the marks inflicted by Duraludon. Although it did not reach the highest pick rate, the shift in the meta that Duraludon produced is a consequence of the rise in Full Heal usage. 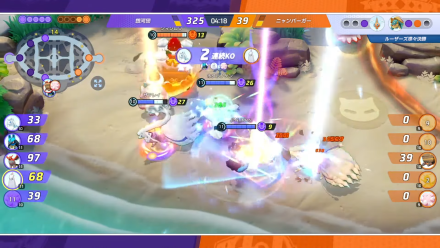 As Duraludon remained the top pick for the whole tournament, it is only fitting for a competitive team to come up with a strategy to counter. One of these is bringing back the Speedsters and utilizing their high mobility and damage to cut through the enemy team and shut down their carry. 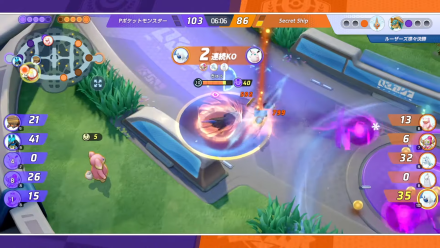 The team Secret Ship took advantage of Absol's highly mobile Dash moves and ability to deal massive damage to pick off Duraludon at the back lines. It also trickled down to Hoopa, where-in the shields produced by Trick were not enough to mitigate most of the damage. Additionally, Absol is mobile enough to dodge Shadow Ball attacks.

Sucker Punch allowed Absol to get a sure-hit attack on slippery Pokemon like Greedent and Lucario and highly durable Pokemon like Wigglytuff. Although not obvious, we suspect that the Aeos Cookie equipped helped in giving Absol more survivability as it pounces towards its targets. 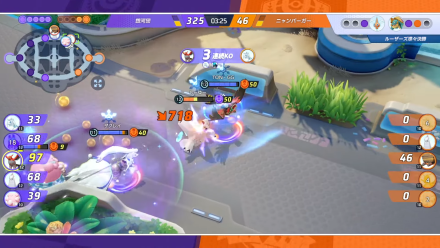 Talonflame's ability to swoop down and deal quick and easy damage made Duraludon players act defensively in fear of getting knocked down. We saw many instances where Flame Sweep was used to cover long distances and get close to enemy Attackers at the back.

Additionally, with the prevalence of Alolan Ninetales and Aurora Veil, the usage of Brave Bird soared as Talonflame's burst potential with Aerial Ace became the best way to deal with targets with little to no mobility.

Battle Items not shown here were not picked during the March Finals.

Held Item not shown here were not used during the March Finals.

Where to Watch March Finals 2022 (Japan)

The full livestream for the March Finals is available in the official YouTube channel of Pokemon UNITE. They usually stream the Monthly Finals so try catching it on scheduled times!

In order for us to make the best articles possible, share your corrections, opinions, and thoughts about 「March Final 2022 Analysis (Japan) - UNITE World Championship Series | Pokemon UNITE」 with us!