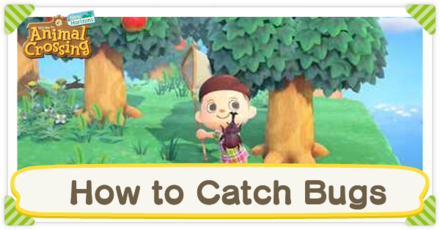 This is a guide to catching bugs in Animal Crossing: New Horizons (ACNH) for Nintendo Switch. This guide will cover the techniques of catching all types of bugs, including bugs on trees, flying bugs, bugs in the ground, as well as bugs on water and more. Read on to learn how to become a bug catching master!

How to Catch Bugs

You never know when the bug you are searching for might just pop out in front of you on its own. If a tarantula or scorpion shows up and you don't have your net ready, you could potentially get stung, which will send you home!

Many rare bugs are quick to flee, so you need to approach them slowly and quietly. You can hold A and move to hold up your net and move slowly.

How to Catch Dangerous Bugs

When trying to catch dangerous bugs, such as scorpions or tarantulas, there are a few things to keep in mind:

This is the easiest way to catch this type of bug. However, if they do chase you, you can still catch them by keeping a fixed space in between you and the bug, then turning around and catching it with good timing.

For a more detailed explanation on how to catch each of these, see the pages below.

How to Catch Bugs on Trees

When trying to catch bugs that can be found on trees like (Horned Dynastids and Golden Stags), here are a few things to remember:

Golden stags and Horned Hercules are very rare, so if you come across one, be sure and catch it!

How to Catch Rare Bugs on Trees

The Mole Cricket can be found buried underground. When trying to catch a Mole Cricket, you will need to listen for its sound.

The Mole Cricket can be tough to find, so be sure and keep your sound on.

How to Catch Bugs on the Ground

For bugs like the Long Locust and Grasshopper, which can be found on the ground:

And that's it. If one of these bugs runs into the water, you won't be able to catch it anymore, so be careful that they don't go in.

Rare Bugs on the Ground

How to Catch Bugs that Inhabit Water

For bugs that can be found on water, simply:

And that's it! Unlike bugs that rest on trees, bugs on water don't really run away, making them pretty easy to catch.

How to Catch Bugs that Fly

For bugs that fly, such as Butterflies and Dragonflies, there are a few things to keep in mind:

That's it. Much like bugs that can be found in the water, these bugs can't really run away, so they are pretty easy to catch.

Check the Bug's Dates and Times 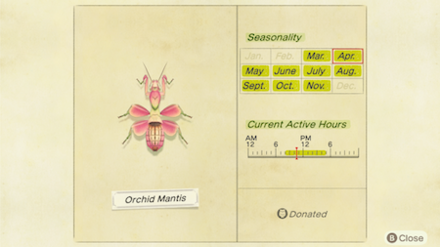 Any bug which has been previously caught will appear in the game's Critterpedia, where you can check the seasons and times when it appears. The Current Active Hours, referring to the times a bug appears, will change month by month, so be sure to check again each month to see if they have changed.

If you haven't caught a Bug before and want to check its information, consult our complete Bug Encyclopedia with information for each Bug and how to catch it.

Although unlike Fish, they are not listed in the Critterpedia, each Bug also has a specific habitat. As there's no way to find this information within the game, the locations and conditions to catch each Bug can be checked in our Bug Encyclopedia.

Some Bugs appear under special conditions 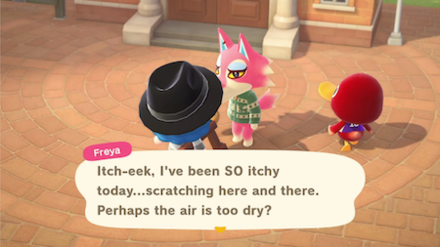 Look carefully at this Villager's head!

Not all Bugs can be caught simply by searching the island at the matching season and time. Some bugs have special conditions to obtain, such as Ants, which require Rotten Turnips to be left outside to appear, and Fleas, which sometimes appear gracing the heads of other Villagers.

If there's a Bug you can't find, be sure to check if it has a special condition to appear first.

Post (0 Comments)
Opinions about an article or post go here.
Opinions about an article or post
We at Game8 thank you for your support.
In order for us to make the best articles possible, share your corrections, opinions, and thoughts about "How to Catch Bugs | List of Rare Bugs" with us!
When reporting a problem, please be as specific as possible in providing details such as what conditions the problem occurred under and what kind of effects it had.