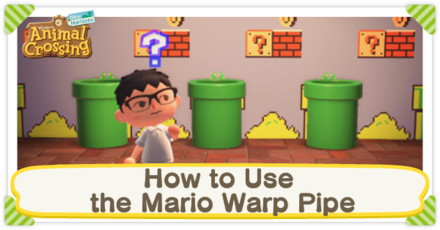 To use the Mario Warp Pipe in Animal Crossing: New Horizons (ACNH), head on over to Nook Shopping to buy the Pipe. Learn creative ways to use Pipes to teleport around and how you can match them to your island by reading this guide!

What Are Warp Pipes?

The Pipe is a new item introduced in the February 25 Update , which adds a selection of Super Mario Furniture to the game.

Fans will recognize these pipes as the main way of travelling between worlds and stages in the Super Mario games.

Where to Get Warp Pipes 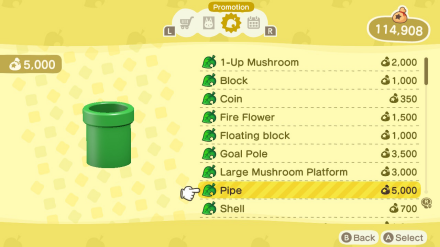 Purchase the Warp Pipe from Nook Shopping under the Promotion Tab in the Special Goods section starting March 1.

To get the Super Mario Items to appear on the Promotion Tab of Nook Shopping, the game must be updated to Version 1.8.0 a.

The game will automatically update to this version on March 1 when you start the game while online.

How to Teleport Using Warp Pipes 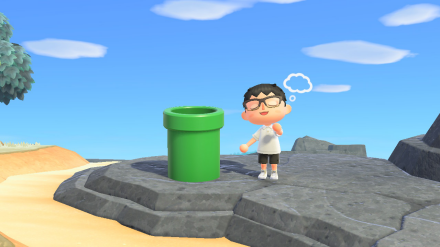 For the Warp Pipes to work, there must be at least 2 Pipes on your island.

Additionally, a Warp Pipe needs space where your character will land after traveling through the pipes.

Three or more Pipes will Teleport you randomly

Placing three or more Warp Pipes around your island causes you to teleport randomly between locations!

This is a fun way to shake things up and maybe trick your visitors. If you want specific locations to connect, however, you need to stick to two Pipes.

Where to Use Warp Pipes

Place Pipes in Your House

Place a Warp Pipe in your house that connects to another pipe outside on your island to allow for quick travel between the two locations.

This is useful if you're decorating and reshaping a far-off section of the island. This allows easy access to your house's storage just by using the warp pipe.

You could also place the other one by your stores for easy shopping!

Use Pipes Instead of Staircases

Since there can only be a maximum of 8 inclines on your island, use the Warp Pipe in place of a ramp to access elevated areas in your island without having to use a ladder!

Many players worry about visitors to their islands accidentally running over flowers or picking up dropped items. As a result, many resort to fencing off major parts of their island and rendering them inaccessible.

With the Warp Pipes, you can now give villagers access to a specific part of the island even if the safe location is very far from the entrance!

How to Hide Warp Pipes 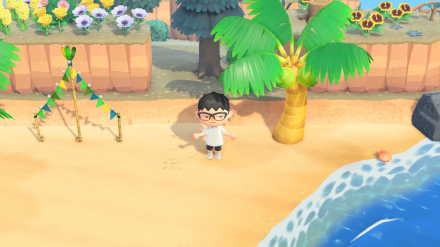 Although Warp Pipes are very useful, they tend to stand out from the rest of the items you can place on your island - especially if you're going for a certain look.

You can't change how Warp Pipes look with customization kits, but there are several creative ways you can hide them in the background of your island!

Bury the Pipe in the Ground

You can "bury" warp pipes in the ground to hide it by surrounding it with cliffs using the Island Designer App.

It's up to you how you decorate the space surrounding the "buried" warp pipe; just make sure there's space for you to land after warping out!

Hide it Behind Trees

Another great place to hide Warp Pipes is behind trees. The leaves of Palm Trees, in particular, are great at hiding the Warp Pipes due to their similar color.

Post (0 Comments)
Opinions about an article or post go here.
Opinions about an article or post
We at Game8 thank you for your support.
In order for us to make the best articles possible, share your corrections, opinions, and thoughts about "How to Use the Mario Warp Pipe | Teleport Guide" with us!
When reporting a problem, please be as specific as possible in providing details such as what conditions the problem occurred under and what kind of effects it had.