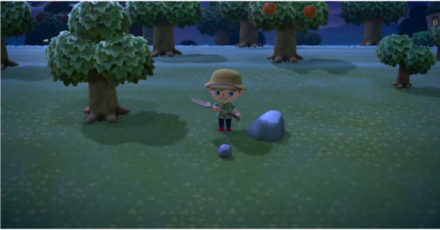 This is a guide to breaking rocks in the game Animal Crossing: New Horizons (ACNH) for the Nintendo Switch. Learn how to eat fruit to gain stamina and what items you can find from breaking rocks, as well as how to move rocks.

How to Break Rocks

Get an Axe or Shovel

The first thing you'll need is an Axe or Shovel. Any kind will do, so craft a Flimsy Axe or Flimsy Shovel if you haven't made one yet.

Eat a Fruit to Gain Stamina

To break rocks, eat a fruit to gain Stamina, giving you a little power boost.

You can find the Stamina meter on the top left corner of the screen after eating a fruit.

What Happens When You Eat Fruit?

With at least one stamina point, you'll be able to break a rock by pressing A while standing next to it with a Shovel or Axe equipped. Let out your stress on something solid!

What You Can Find Inside

These items have been confirmed to be found inside Rocks. However, when searching for items like Iron Nuggets, it is better to hit rocks without breaking them, as breaking a rock will limit you to only one item, while hitting a rock will allow you to obtain several items in one go.

Rocks Respawn in a Random Spot the Next Day

A broken rock will reappear the next day, in a random spot somewhere on your island.

A maximum of 6 Rocks can exist on your island at a time. When breaking several Rocks at a time, they will reappear one by one each day.

Rocks Only Appear On Land

Rocks cannot appear next to buildings, cliffs, water, and infrastructures. Rocks also do not spawn on the beach. If you have the Island Designer app, rocks will not appear on top of or next to hard paths such as stone or wood.

How to Move Rocks

To move the placement of your rocks, you first need to destroy them. If you want to control where they respawn, you can take the time to cover the island with items or fences, so that rocks will only spawn at the position where you would like them to be.

Take note that this process is long and may take from hours to days to finish. You can also time-travel to make the rocks appear faster and speed up the process.

Register as a member and get all the information you want. (It's free!)
Login
Opinions about an article or post go here.
Opinions about an article or post
We at Game8 thank you for your support.
In order for us to make the best articles possible, share your corrections, opinions, and thoughts about "How to Break and Move Rocks" with us!
When reporting a problem, please be as specific as possible in providing details such as what conditions the problem occurred under and what kind of effects it had.