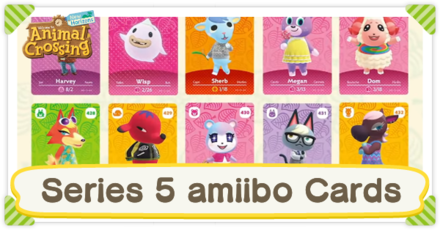 amiibo? Give-me-mo'! The new Series 5 amiibo cards dropped on November 5th, 2021. Check everything we've seen so far with our list of all amiibo cards and new characters and where to order!

We've already seen 10 new Special Characters, from the ACNH Direct. Nine of the card cards are brand new additions to the amiibo collection!

Though no images have been released, some other characters have been shown on the amiibo card packaging! Our guess is that we'll also see these characters in the mix!

There are a total of 39 new amiibo cards for Villagers. All Series 5 Villagers amiibos are brand new additions to the amiibo collection. No dupes here!

Where Can I Buy the amiibo? 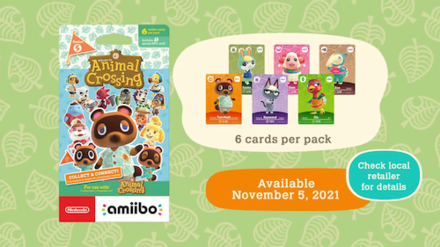 The Animal Crossing Series 5 amiibo cards released on November 5th, 2021. Similar to previous amiibo cards like the Sanrio amiibo cards you can get them at other retailers like Target!

Walmart has also launched a pre-order on for the cards, but are now sold out. Check this space for updates as soon as information drops!

Register as a member and get all the information you want. (It's free!)
Login
Opinions about an article or post go here.
Opinions about an article or post
We at Game8 thank you for your support.
In order for us to make the best articles possible, share your corrections, opinions, and thoughts about "List of All Series 5 amiibo Cards" with us!
When reporting a problem, please be as specific as possible in providing details such as what conditions the problem occurred under and what kind of effects it had.