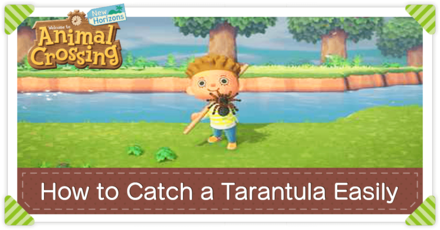 This is an explanation of how to catch Tarantulas in the game Animal Crossing: New Horizons (ACNH). Learn about when and where Tarantulas appear, how to catch them, and whether you should sell them.

What is a Tarantula

The tarantula is a rare and dangerous bug that can only be found on the ground at night. Like the scorpion and wasp, they are incredibly difficult to catch and can harm the player. However, they do not attack unless the player is carrying the net.

When Does the Tarantula Show Up?

Appears late at night between November and April

The tarantula will appear somewhere in the island late at night. If you wanna catch this critter, you'll either need to wait until it gets pretty late, or set your clock forward a few hours.
Time Traveling Guide

How to Catch a Tarantula 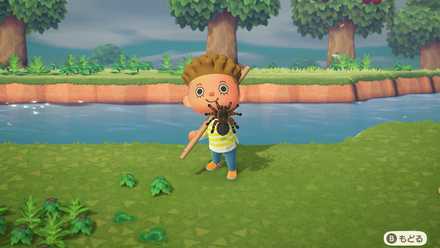 To catch a tarantula, it is essential that you have a bug net of some kind in your inventory, which can be crafted through DIY. The type of net you use doesn't matter, so you can catch a tarantula as soon as you have access to the Flimsy Net.

List of DIY Recipes | How to Get DIY Crafting Recipes

Method 1: Stay at a fixed distance and catch it

If the tarantula decides to lunge at you, you will want to run away, then turn around and strike back. We recommend holding the A button and swinging your net right before it makes contact with you.

For more help with this, see the video walkthrough below!

Method 2: Catch it while it is hissing

When the tarantula first sees you, it will stand up and try to intimidate you by hissing. While it's a bit risky, you can actually catch it during this animation. Approach slowly by holding A while walking. When it does this pose, stop walking, and then continue again once it lowers its body. It will do this pose multiple times, so move only while its body is lowered, until you are within range, and then catch it.

You'll be sent home if it bites you

If the tarantula finds you going after it, it will begin to chase you. If it catches you before you can get it, your character will black out, and you will wake up in front of your house. However, other than the minor inconvenience, it will have no negative effects.

Check out the following video if you are still having trouble catching a tarantula.

By using a Nook Miles Ticket, to go on a Mystery Tour, you can sometimes find an island with infinite taratulas. Going after a tarantula here will cause several other tarantulas to come after you, so if getting chased by several tarantulas isn't your thing, you might want to be cautious.

Since tarantulas can be sold for 8,000 bells, going to this island and catching a lot of them is one way to make a lot of money. However, since the island you go to on Mystery Tours is random, there is no surefire way to get there other than buying a bunch of tickets and going.

What Should You Do With the Tarantula?

Be sure to donate the first one you catch

Handing over a bug that you have caught to Blathers will allow him to exhibit it in the museum. Bugs can be donated once, increasing the number of bugs you see in the museum, so you should generally donate the first one you catch there.

The tarantula has one of the highest selling prices of all bugs. If you are trying to collect more bells, this is one sure method of doing it.

How to Get Bells (Money) Fast

Keep it as a pet if you like it

You can display a tarantula as a pet in your room. If you enjoy collecting bugs for yourself and being able to see them up close, this may be the best option for you.

I haven't had one spawn for me in over a month. I'm in the right days and times. Am I doing something wrong?

>>6 You don’t cage one, once you catch it, you will need to display it so it will be caged

Register as a member and get all the information you want. (It's free!)
Login
Opinions about an article or post go here.
Opinions about an article or post
We at Game8 thank you for your support.
In order for us to make the best articles possible, share your corrections, opinions, and thoughts about "How to Catch a Tarantula Easily" with us!
When reporting a problem, please be as specific as possible in providing details such as what conditions the problem occurred under and what kind of effects it had.