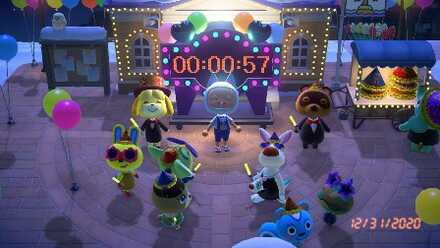 See all the things to do in December in Animal Crossing: New Horizons (ACNH), for the Nintendo Switch. These include all December events, bugs, fish & sea creatures that are coming and leaving in December, December-exclusive recipes & items, and all December birthdays! 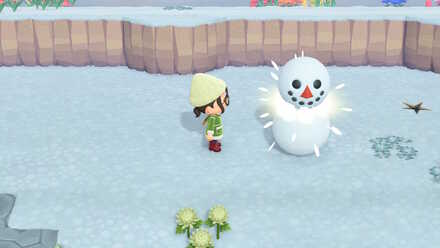 Snowboy reappears in New Horizons to reward the player some neat recipes! Find the small snowballs in your island try to create the perfect Snowboy!
How to Make Snowboys 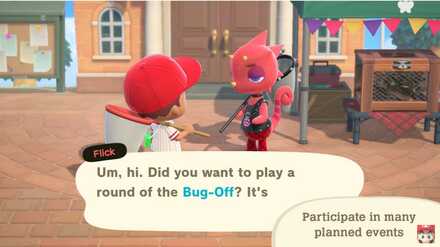 On Saturday, December 19, from 9:00 AM to 6:00 PM, Flick will hold another Bug-off event. You can participate by talking to Flick, in front of Resident Services. Catch as many bugs as you can within 3 minutes!

Learn more about Flick's Bug-Off and the list of prizes you can get through our guide below!

Although not a proper event, the Winter Solstice has the shortest day of the year. Northern Hemisphere players will notice that the sun will set earlier than usual, and you'll also have a chance to see the Aurora Borealis in the sky. 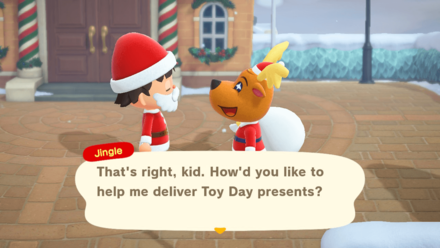 Toy Day is the month's main event and is held every 24th of December. Jingle, the Black-Nosed Reindeer, will appear on your island and ask you to help spread holiday cheer by delivering presents to your villagers! 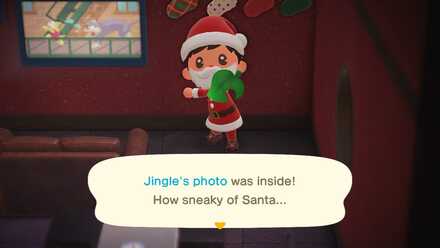 If you hung Toy Day Stockings inside your home on the previous day, you will receive Jingle's Photograph! Just inspect your stockings to receive your lovely gift from Santa! 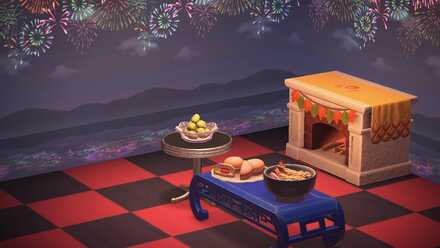 Raise a glass as we welcome the upcoming New Year with some new items! These festive treats are available at Nook Shopping from December 26 to 31.

These are limited seasonal items, so order yours as soon as you can! 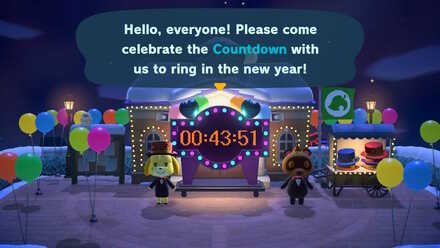 Countdown is the first part of the New Year's event. Resident Services will be closed the whole day. Instead, an electronic billboard will appear in the plaza which will count down to the New Year.

Isabelle and Tom Nook will camp out on the plaza and will give you a light stick item and a bag of party poppers respectively. Additionally, Tom Nook will be selling Countdown-related gifts all day.

Once the day comes to an end, your villagers will all gather on the plaza to watch the fireworks at midnight and celebrate the New Year.
Countdown Event Info and Rewards

Bugs and Fish Available in December

All Bugs and Fish Available in December

To see the complete list of bugs and fish available in December, check out the following pages.

Check out the critters that have started appearing this December (Northern Hemisphere).

Bugs and Fish Leaving in December

These critters will not be available until their next seasonal month so be sure not to miss them!

Note: These lists are based on Northern Hemisphere dates. In the Southern Hemisphere, these bugs and fish appear in June. We will continue to update this page. If you can provide any kind of verifiable info about bugs not shown in the list, be sure and send us a picture in the comments.

All Sea Creatures Available in December

To see the complete list of sea creatures available in December, check out the following pages.

Check out the sea creatures that have started appearing this December (Northern Hemisphere).

These sea creatures will not be available until their next seasonal month so be sure not to miss them! 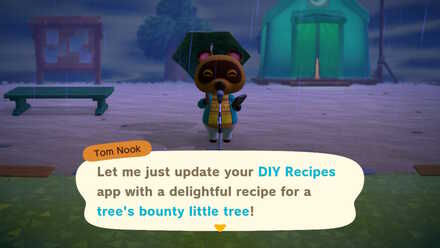 Get the Snowflake Wreath Recipe During the Daily Broadcast 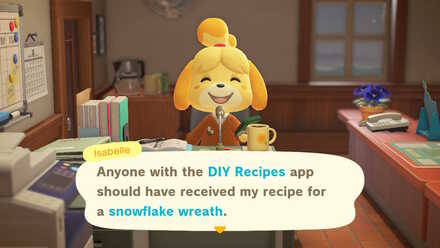 Once winter has settled in, Isabelle will make an announcement on snowflakes falling on the island. The Snowflake Wreath recipe will also be given to you during the daily broadcast.

Receive the Ornament Wreath Recipe During the Daily Broadcast 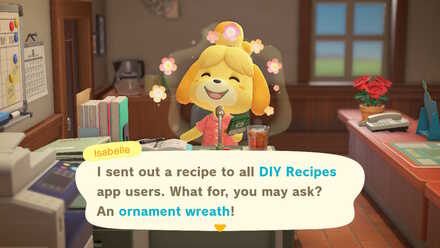 Isabelle will make an announcement on illuminated trees that she decorated herself. You will also receive the Ornament Wreath recipe, which needs ornaments to craft it. 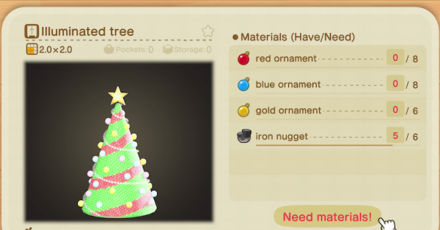 You can get DIY recipes for Festive items from balloon presents from the middle of December to early January as we celebrate the festive season! 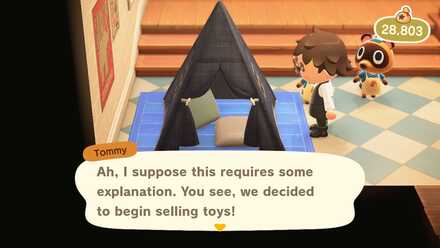 Toy Day gifts will be available at Nook's Cranny from December 1 to December 25. They can be given as gifts to your villagers on Toy Day or you can purchase one for your own house!

Get Acorns and Pine Cones by Shaking Trees 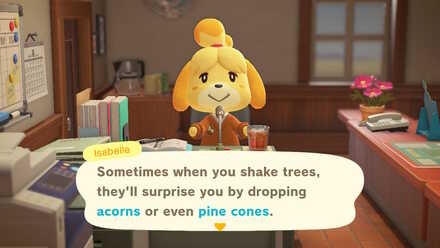 December 10 is the last day you will be able to get acorns and pine cones by shaking trees, until next September. You'll need them to complete the Tree's Bounty Series Furniture collection, so shake those trees! 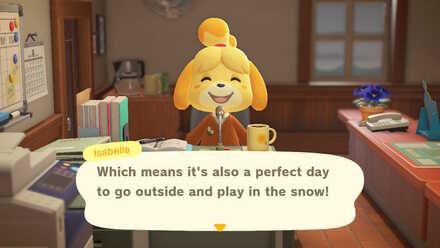 Catch the snowflakes falling on your island to craft exclusive Snowflake items!

Snowballs will also start appearing, which you can roll to form Snowboys. Creating a perfect Snowboy awards you with Large Snowflakes that you can use to craft Ice (Frozen) items.

Get Ornaments from Cedar Pines 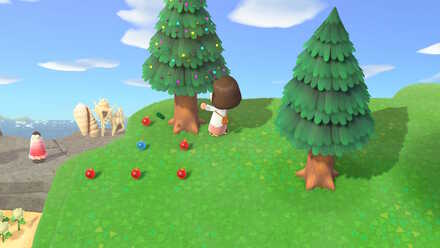 Once the Festive Season starts, Isabelle will make an announcement on how she decorated the cedar (pine) trees with ornaments. You can shake these trees to get Ornaments, with the Gold Ornament being the rarest of the three.

How to Get Ornaments and How to Use Them 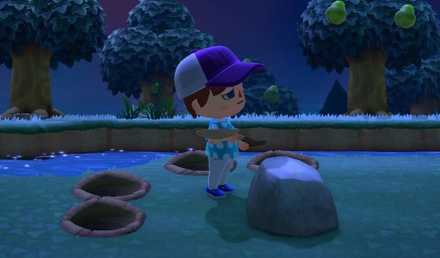 Can't wait for the fishing tourney

>>1 My bad, it's called the Pond Smelt, I was looking at a translation.

Register as a member and get all the information you want. (It's free!)
Login
Opinions about an article or post go here.
Opinions about an article or post
We at Game8 thank you for your support.
In order for us to make the best articles possible, share your corrections, opinions, and thoughts about "December To-Do List | December Bugs and Fish | December Events, DIY Recipes, and Birthdays" with us!
When reporting a problem, please be as specific as possible in providing details such as what conditions the problem occurred under and what kind of effects it had.