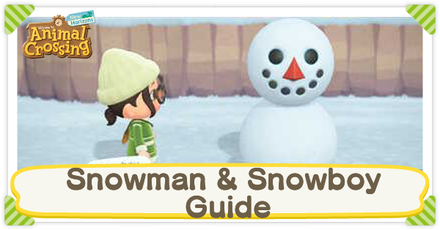 Rolling snowballs to build the perfect Snowboy and get Large Snowflakes with seasonal DIY Recipes can be quite tricky in Animal Crossing: New Horizons (ACNH). Luckily, you can find our tips and tricks below to help you out!

When Can You Make Snowboys(Snowman) 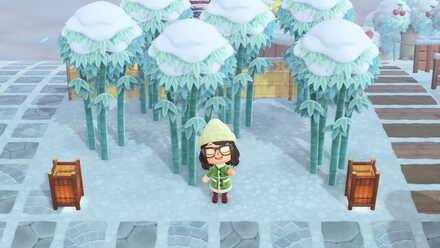 Make Snowboy in the Snowy Season

How to Make a Snowboy (Snowman)

Steps to Make a Snowboy 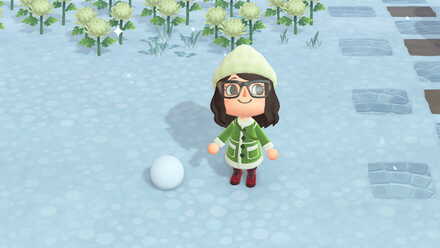 To make a Snowman, or Snowboy, you first need to locate the two snowballs that have spawned somewhere on your island. You can't make a Snowboy with only one, so find both and plan ahead!

You'll also only be able to make one Snowboy per day, so to get the DIY Recipes and Materials, you'll want to make it perfect.

Snowballs are found nearby each other

From our testing, Snowballs seem to almost always appear on the same layer, whether on the ground level or on your cliff areas. But don't worry, they will be relatively close to each other!

2. Kick the Snowball 13 Times to Make it Larger

Note: 13 kicks only apply if you don't kick it over any non-snow-filled areas.

The snowballs found on the island start off pretty small, and then you kick it with your foot to make it roll and grow in size. To kick it and get the ball rolling, simple walk towards the snowball and your character will do the rest!

When you kick it, it will move a set distance ahead and can easily break against walls or other objects, or fall into rivers, so carefully aim while you move it around.

3. Push by Hand to Control the Size

After kicking the snowball for 13 times, it'll reach a certain size and you'll be able to roll it using your hands.

You need a large bottom, and a smaller top in just the right proportions to create the perfect Snowboy, so be sure to keep that in mind before rolling away!

Make the snowball smaller by rolling it over snow-free ground!

If your snowball has gotten too big, you can decrease its size by rolling it over ground that doesn't have snow on it.

Be careful when rolling over bridges and inclines!

Be careful when rolling snowballs down arched bridges and inclines! They will roll down at a faster speed and you won't be able to control them, so make sure the area below is free of obstacles.

4. Roll the Second Snowball Into the Larger Snowball

After making the two snowballs the perfect size, it's time to build the snowman!

Roll the smaller snowball into the large snowball for Snowboy to be formed. Just like with kicking, this will happen automatically.

5. If Done Perfectly, You Get Rewards 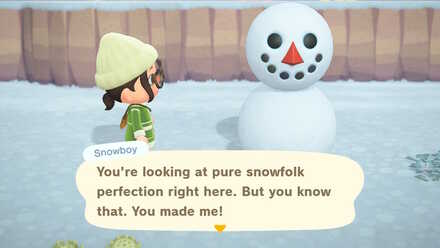 Other than being showered with praise when you build Snowboy perfectly, you will also get multiple rewards (which you can check out in the next section), so master rolling those snowballs!

Snowballs Respawn After Being Destroyed

Don't worry if you accidentally destroy a snowball! Simply enter and exit any building, and a fresh snowball will appear. Sometimes, this might actually be the quickest way to bring your two snowballs together.

Tips and Tricks for Making the Perfect Snowboy 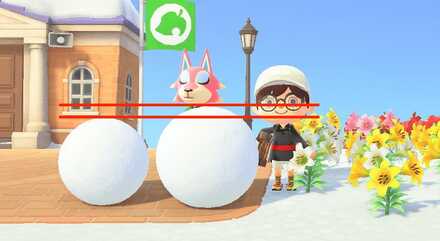 There are various opinions regarding the ideal snowball sizes. If you have other ideas of to do this, please share with them with us in the comments!

Take Advantage of the Camera App 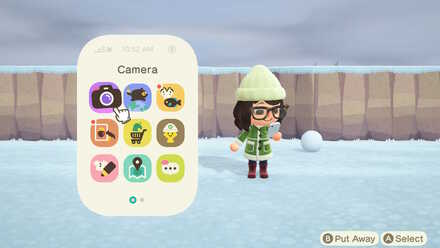 We recommend using the Camera app on your NookPhone to measure the snowball proportions before putting them together.

The Body Should Reach the Top of Your Ears 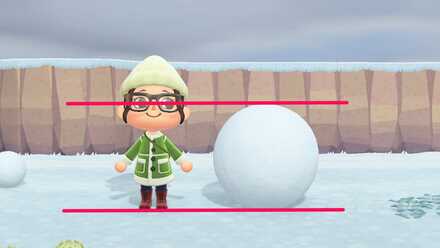 A friendly neighbourhood player told us that you can also aim for the max size by rolling until the snowball size stops increasing.

The Head Should Reach Below Your Ears 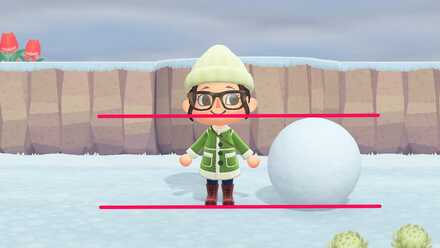 We recommend rolling the snowball until the size reaches up to your chin, or the bottom end of your ears. A slight difference is size is acceptable as long as you keep in mind what the general size should be.

If you rolled the max size for the body, you can match it by rolling the snowball for the head until it reaches between your chin and below you ears.

Watch Out for Dung Beetles! 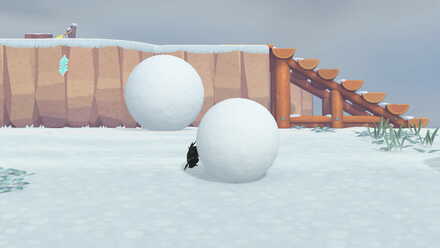 Even if you get the right proportions, keep an eye out for dung beetles, as they can roll the snowballs without you knowing!

If a snowball is moving on its own, you've got beetle trouble, so check carefully before putting the 2 snowballs together (and remember to catch one for the Museum). 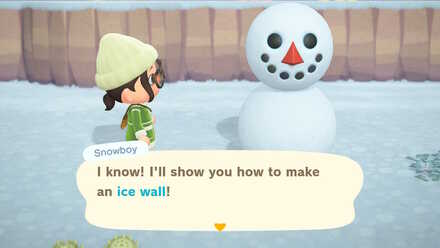 If you get just the right proportions, Snowboy will come to life and he will give you a DIY recipe from the Ice (Frozen) series. He will also give you a Large Snowflake, which is a material used to craft items from that series, so be sure to save it!

A recipe is guaranteed the first time you build Snowboy 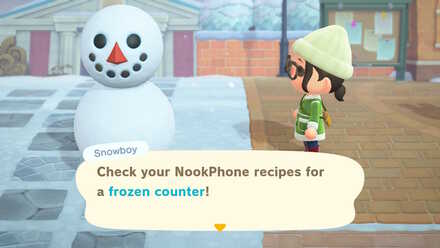 You'll always get a recipe the first time you make a Snowboy, regardless of whether you made him correctly or not. However, the next time you attempt to make a Snowboy, you will be judged by how well you build him.

No rewards for wrong proportions! 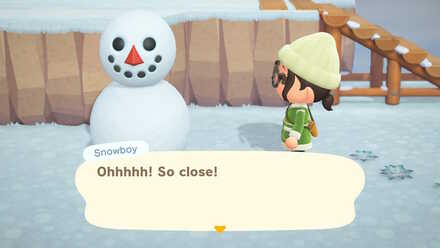 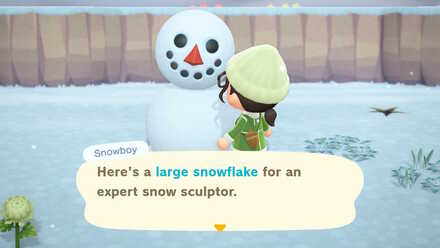 When you make a perfect Snowboy, you can talk to him to get a Large Snowflake from him every day, including the day he was made, for a total of 4 days until he melts.

You can do this for each perfect Snowboy you have, so aim for perfection each day to rack up those Large Snowflakes for crafting!

How to Get Snowflakes 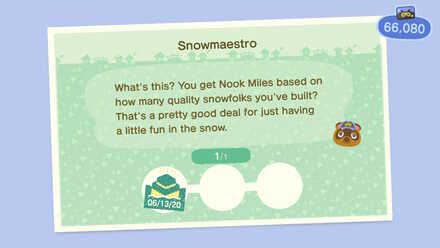 After building a perfect Snowboy for the first time, you will unlock the Nook Mileage activity "Snowmeastro"! It is possible to make 20 perfect Snowboys in one snowy season, so you don't have to worry about having to wait another year if you don't time travel.

How Long Does Snowboy Last Before Melting?

A Snowboy Will Last 4 Days

A built Snowboy will stay for 4 days before completely melting. If he is made perfectly, he will give you a Large Snowflake each day.

Have more than 1 Snowboy on your Island 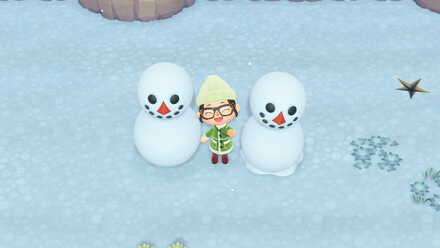 If you build a Snowboy each day, you can have more than one Snowboy on your island at a time!

Since they melt 4 days after you build them, you can have a max of 4 Snowboys on your island at any time. If they're all perfect, that means 4 Large Snowflakes a day!

What to Do When Snowballs Don't Spawn? 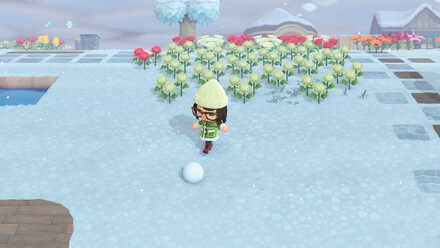 Snowballs won't spawn if you don't have enough space in your island. So make sure you have an open area where you can freely roll a snowball around to create the perfect Snowboy!

Check Behind Buildings and Trees

It is possible that the snowballs are just behind trees and buildings, so keep your eyes peeled when looking out for them!

In order for us to make the best articles possible, share your corrections, opinions, and thoughts about 「How to Make Snowballs: Perfect Snowman and Snowboy Guide | ACNH - Animal Crossing: New Horizons (Switch)」 with us!