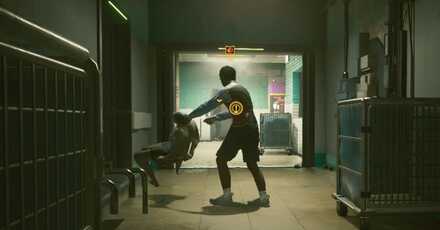 How to Unlock Gig: Cuckoo's Nest 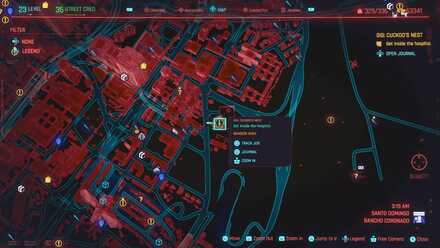 You will need at least Street Cred 21 in order for this gig to be unlocked. Head to the marked location to receive the gig.

Entering the hospital through the roof is the best option as it leads you almost directly to your target.

From the south of the front entrance, you can leap to the scaffolding, which will in turn give you access to the hospital's roof. Use the crates to the south to reach the next roof in line and you find double doors that can be force-opened if you have 16 Body points.

Once inside the hospital's main hall, go through the double doors on the south wall. Open them, but do not enter the hostile area yet. Disable the camera then move to the other end of the corridor, beyond the double doors, and hide behind the crate. Take the stairs on your left to reach the upper floor. Sneak up on the guard in front of room 7 and take him down.

An alternative path you can take from the hospital's main hall is through the door in the southwest corner. There's a grate you can crawl into the break room. This route merges with the previous one.

The best route to go through here would be the front entrance. Shoot your way from the main hall to the upper floor. There will be a handful of armed personnel in the building so be careful.

This list contains only Rare and Epic Items and those which have a high chance of appearing.

Register as a member and get all the information you want. (It's free!)
Login
Opinions about an article or post go here.
Opinions about an article or post
We at Game8 thank you for your support.
In order for us to make the best articles possible, share your corrections, opinions, and thoughts about "Gig: Cuckoo's Nest Quest Walkthrough and Rewards" with us!
When reporting a problem, please be as specific as possible in providing details such as what conditions the problem occurred under and what kind of effects it had.