This is a walkthrough for The Hunt, a Side Quest in Cyberpunk 2077. Read on to learn all the available choices in The Hunt, how to get the best possible result, tips and strategies for the Quest, and all available rewards.

How to Unlock The Hunt

I Fought the Law Walkthrough

The best way to get into the farm is by deactivating the security system in the farm in the house nearby.

There are two methods to get into the farm. One is to just sneak or hack through the defense systems. Another way is to deactivate the security systems in the house.

You will need to first get into the house to deactivate the security. There are two turrets in the front. You can avoid them or deactivate/destroy them to make it easier. You can get in through shutters that require Technical 5 on the right side of the house or through a door on the left. The security controls are in a secret room in the bedroom on the second floor. The switch to open it is under the desk.

After deactivating you can run to the ladder on the left side of the barn.

Hack or Sneak Past Security

Open A Door With Technical Skill

There's a door at the side of the building that requires 12 Technical Points to open.

Climb To The Back 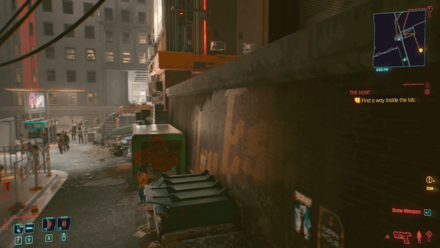 You can climb to the back of the building by jumping atop the dumpster and the food truck in the picture above, which are found on the side of the building. Next, climb up the ladder next to the closed shutter labeled NCPD. You should find an accessible window on the second floor.

Deactivate at least one of the turrets with a QuickHack so that you have an opening to sneak past into the house. If possible, deactivate both turrets guarding the house.

Always Side With River

During the conversation with Dr. Packard be sure to take River's side when she goes off on him, so choose the following dialogue options when they appear:
Hasn't let me down yet.
I wanna see for myself.
These are timed choices so be sure to pick fast. You will have one more choice later with Johnny that affects this, saying River's all right.

Hit Me With a Beer

During the car, ride choose Sign me up for that beer. when River mentions it.

When you view the braindance, scan all of the clues. Finding all of the clues will have River drive directly to the farm, but in the chance that you don't, choose Edgewood when prompted or you won't be able to move onto the final quest.

After rescuing Randy you have the option to help him out in getting to Harris. Pick I'll help you. during the conversation to trigger the next quest.
River Ward: Romance Guide

In order for us to make the best articles possible, share your corrections, opinions, and thoughts about 「The Hunt Quest Walkthrough and Rewards | How to Get Harris' IP Address and Braindance Guide | Cyberpunk 2077」 with us!