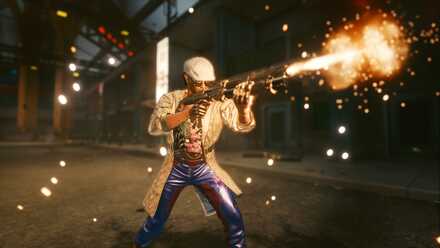 This is a guide to the Best Tank Build for Cyberpunk 2077 Patch 1.6. Read our guide for details about the build, what attributes to level up, which perks to choose, and what weapons and cyberwares to use.

Allocating points to your Body attribute will raise your health and give you access to perks in Athletics that will further boost your HP and armor, which is the focus of this build.

This also opens up Annihilation perks to add offensive power through the use of Light Machine Guns and Shotguns. Both aspects of the build are then bolstered with perks under Cold Blood.

Lastly, some points are allotted to Reflexes and Intelligence to allow you to fit in cyberwares that increase your defense even more and give you more survivability in gunfights.

The Annihilation perk tree encourages getting close to your targets and showering them with bullets, thanks to the offensive boosts from perks under this tree.

Start with Hail of Bullets and In Your Face at the beginning to power up your early game weapons.

The following Athletics perks will increase your health, armor, and survivability to allow you to eat up all the bullets your enemies will fire at you.

Obtain Regeneration and Epimorphosis to boost your health recovery early in the game.

Like with other offensive builds, Cold Blood perks will help you buff your offense and defense as you kill your enemies during gunfights.

Start with Cold Blood, and branch out to Critical Condition and Defensive Clotting as you progress early in the game.

These Ninjutsu perks are not a priority but are rather bonus buffs to help you once you have obtained Annihilation and Cold Blood perks.

You will be able to get these perks under Ninjutsu as you will unlock them while leveling up your Cool attribute to get the necessary cold Blood Perks.

As of Patch 1.6, Defender is one of the two Light Machine Guns available in the game. This weapon has four mod slots and can be bought at Straight Shooters in Watson, although the rarity may vary.

Even though it's your typical double-barrel shotgun, the Sovereign is a devastating weapon to use with this tank build. Get up and close and shred your targets with every shot without worrying about reload speed, as your perks and this weapon's effect will alleviate it.

The reason why a couple of points are added to your Reflexes attribute is for you to be able to equip Sandevistans. This will allow you to slow down time and pick off targets easily while getting damage and crit buffs while the effect is active.

Equipping Gorilla Arms as your Arms cyberware will give you a backup weapon to use if you run out of ammo or need some emergency clobbering if you get swarmed by enemies.

This weapon is powered up by your Body attribute so it is chosen to take advantage of the damage buff obtained from leveling up this stat.

The listed cyberwares above fortify your health and defense. You simply shrug off bullets once you're out in the field, as these cyberwares synergize with the build's perks to make you a walking, dominating tank in Night City.

How to Play the Tank Build

The last few perks under the Annihilation tree encourage you to run around while shooting your targets. This is useful as you don't want to be stationary while fighting.

Take full advantage of the bonus movement speed, damage boost when shooting while moving, and decreased weapon recoil of this build while eliminating your opponents one by one! 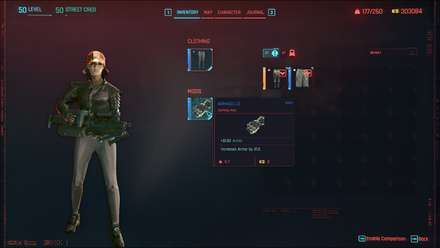 To further bolster this build's defense and make yourself even tougher, don't forget to equip Armadillo mods.

These mods stack and the rarer ones give more defense, so keep an eye out for these and equip it once you obtain them!

In order for us to make the best articles possible, share your corrections, opinions, and thoughts about 「Best Tank Build for Patch 1.6 | Cyberpunk 2077」 with us!