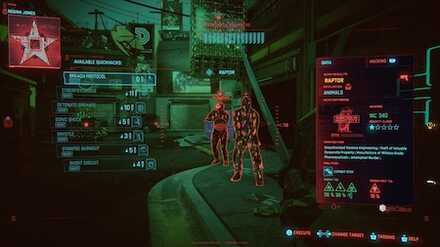 This is a list of the Best Quickhacks to equip to your Cyberdeck in Cyberpunk 2077. Learn which Quickhacks are most effective for each situation, and what Quickhacks you should invest in.

This Quickhack costs little RAM, so you're generally limited only by its cooltime. Depending on your Perks and Intelligence stat, this quickhack can defeat most enemies in one blow. Combining this with Synapse Burnout will be good, too. Its Legendary variant's passive is situational but helpful in taking down enemies hit by crits.

While its base effect is only a bit useful in revealing enemy locations, its Legendary variant allows you to not only see where everything is but also allows you to scan and hack enemies through walls and floors, letting you hack away safely from a location where they would never notice you.

Extremely powerful when taking a stealthy approach. Even if you're caught by an opponent afflicted with this, they won't be able to tell their allies, preventing them from blowing your cover.

A more mild version of the Suicide Quickhack. Does not kill the opponent, making this all the more useful for Quests where you must subdue opponents without killing them. The passive effect that comes with its Legendary variant is also incredibly useful for saving on RAM in situtations where you'll be hacking a lot.

When the enemy can't see you, they won't be able to find you. When this reaches Legendary tier, it will also add the bonus Optics Jammer daemon for Breach Protocol. Paired with Sonic Shock, an enemy under the effects of both will be completely unable to detect you to easily slip past them or quietly take them down.

Simply put, commands the opponent to die. This Quickhack costs a large amount of RAM, so you'll need to invest heavily in Intelligence and related Perks in order to use it repeatedly, making Quickhacks such as Short Circuit and Synapse Burnout more useful.

An effective solution for fast enemies who cannot be hit easily with attacks. Only useful in specific situations.

An alternate choice for Synapse Burnout. A standard attacking option.

Causes confusion across the area, making it rather difficult to use. Helpful for causing drones and robots to malfunction and go wild.

Very useful for immediately ending Combat when necessary. If you have an extra slot, this is a solid choice.

Can be seen as a weaker version of Suicide and System Reset, but when a target holds a powerful grenade, it can also take out a group of nearby enemies in one blow.

Useful for taking out enemies in a group when using stealth. Make an enemy move near a dumpster, then have fun knocking them out and throwing them away without ever being noticed.

Like Cyberpsychosis, it can be used on powerful single enemies, but in general, you're better off spending time taking the enemy out than glitching them. The Weapons Jammer daemon that comes with its Legendary variant, however, can be useful if youre more of the combat hacker type and ignore stealth. Hack away and go to town while the enemies can't shoot you back.

This Quickhack seems to sometimes cause a bug which will cause the user's movement to be limited as well. Be sure not to use it accidentally.

In order for us to make the best articles possible, share your corrections, opinions, and thoughts about 「Best Quickhacks | Cyberpunk 2077」 with us!