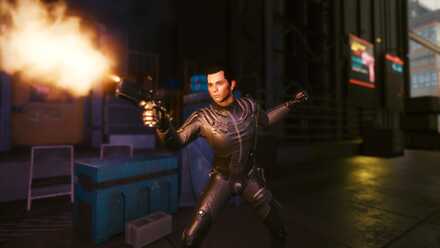 This is a guide to the Best Tech Weapons Build for Cyberpunk 2077 Patch 1.6. Read our guide for details about the build, what attributes to level up, which perks to choose, and what weapons and cyberwares to use.

Builds centered on Tech Weapons will revolve around two main attributes, Reflexes's Assault or Handguns, and Tech's Engineering perk tree. The former will power up the weapon you want to use and the latter will improve your Tech Weapon's charged shots, which is your main way of dealing with your enemies.

This build will max out your Tech attribute, which is why you should aim to use crafted weapons and clothes and get benefits from several Crafting perks. You don't need to go out of the way to get these perks, as these will be naturally unlocked as you raise your Tech stat.

Furthermore, like with other builds, Athletics perks are obtained to boost your health, recovery, and survivability. The use of quickhacks and Quickhacking perks are also added into the mix to provide other methods of wearing down your targets.

The primary weapons intended for this build are Tech Precision Rifles, which benefit from perks found under the Assault tree. The build's damage boost and decreased reload time and recoil are covered by the perks listed.

Regular Assault Rifles also benefit from these perks, which you should use as your backup weapon in case you need it.

Get Bulletjock, Executioner. and Bullseye early on to increase your weapon's offensive potential.

Several perks under Engineering will power up Tech weapons in the game. Charged shots, which are essential to hit your enemies through walls, are boosted even more as you get the high-level perks under this tree.

Since Tech Weapon-boosting perks can't be obtained until your Tech attribute is high enough, you can opt not to get any perks under this tree early in the game and focus on getting Reflexes perks first; but do remember to allot attribute points to your Tech stat, as the earlier you can raise this, the better.

Do this until you reach Tech level 9, where Up to 11 is unlocked.

Leveling up your Tech attribute will naturally increase your Armor. Athletics perks will further bolster your defense and even give you survivability during fights.

Obtain Regeneration and Epimorphosis to boost your health recovery early in the game.

The following perks under Crafting are obtained midgame to help you improve your offense and defense by using crafted weapons and clothes.

Getting Cutting Edge and Field Technician will allow you to deal more damage when using weapons you crafted yourself.

The Ping quickhack plays a central role in this build which lets you locate your targets from afar.

Equipping a Cyberdeck Operating System will give you slots where you can use other, more offensive quickhacks, although you should not fully rely on these as these are only supplementary attacks.

One of the best Tech Weapons in the game. Always use charged shots to maximize your damage output.

Breakthrough holds less ammo per clip than Widow Maker, but can still wipe away your target in a few shots.

Cyberdecks are equipped as your Operating System so you can use Ping to locate your enemies without showing your position. This will also allow you to use other quickhacks.

Equip Mantis Blades for your Arms cyberware to take advantage of the damage boost it gets from leveling your Reflexes attribute. You can switch to this weapon to slice and dice any enemies that made their way towards you, as Tech Weapons are ineffective in fast-paced, close-quarters fights.

The following cyberwares should be equipped to increase your survivability, especially in cases where several enemies will find your position to deal with you up close.

For your Ocular System cyberware, make sure to slot in a Threat Detector mod, as this will be extremely helpful in locating enemies from afar.

Ping lets you locate all enemies around the area, which is integral to this build. This will allow you to spot your targets even before initiating a fight so you can identify the easiest targets to pick and locate a safe place to hide.

How to Play the Tech Weapons Build

Use Quickhacks and Mods to Locate Enemies

If you combine the effects of Ping and the Threat Detector mod, you can easily spot every enemy you need to deal with and simply attack with your charged shots even if you are far away.

Switch to Another Gun When In Trouble

You should always attack from behind walls and covers to fully utilize Tech Weapons, but there will be times when enemies might gang up on your location which renders your weapon almost useless.

To combat this, you can equip non-Tech weapons, like regular Power assault rifles or SMGs, so you'll have a backup gun to use against enemies near you.

Once cleared, you can reposition to another area and continue taking down the rest of your targets.

If you prefer using Tech handguns, like pistols and revolvers, you can get perks under the Handguns perk tree instead. Choose perks that increase the weapon type's damage output.

The rest of the attributes and perk trees will not have changes, as the strategy behind the build remains the same: shoot behind walls!

In order for us to make the best articles possible, share your corrections, opinions, and thoughts about 「Best Tech Weapons Build for Patch 1.6 | Cyberpunk 2077」 with us!