How to Get the Secret Ending | Cyberpunk 2077 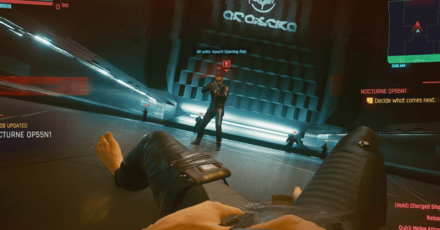 We have updated our guide and not all the choices in the video are necessary for the secret ending.

After getting the right dialogue choices, you will need to wait when deciding what to do at Misty's special spot during Nocturne OP55N1. The way to the secret ending will reveal itself there.

Note: There is no way of missing this side job, even if you don't agree to let Johnny take over your body at the end of Tapeworm. You will still have the side job unlocked.

You can reach these required dialogue choices regardless of any previous options you chose before.

To unlock the secret ending, “Don't Fear the Reaper,” you will need to call out Johnny on his past actions and not to be overfriendly with him, but not too hostile either. Let him know he let you down, but you're willing to give him another chance. This will change your relationship with Johnny. You won't be too forgiving of him and the shit he pulled on you, but you won't be too hostile and push him away either.

Wait for Five Minutes During the Nocturne OP55N1 Decision 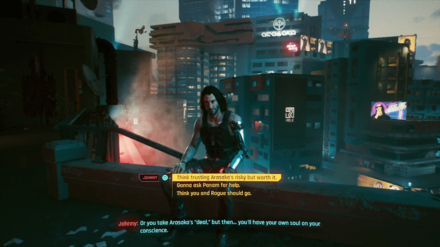 During the Point of No Return when making the decision on the roof with Johnny you can choose any of the choices presented to you.

When the next dialogue option appears, the one with the option to take the pills, suicide, and to change your mind, wait without choosing for five minutes.

Once Johnny suggests the option of a “wild suicide run”, agree to go ahead with it and the secret ending will begin.

Do You Need a Good Relationship with Johnny?

The three gauges appearing on the Menu screen each seem to indicate the player's progress in a specific aspect of the story. At first, acquiring a high value in the middle gauge was thought to be key to unlocking the Secret Ending. It is not entirely clear what its true purpose is.

With our team testing this claim, we have concluded that this is not the case, and the tried and true method above will reliably get you the secret ending. Although, there's nothing wrong with wanting to increase the gauge. Who doesn't want to be friends with a legend?

Our playthrough of getting through Arasaka Tower!

How to Get Through Arasaka Tower

Below is a list of the gear we used while going through Arasaka Tower. We recommend using this gear.

Getting through Arasaka Tower in the Secret Ending is one of the toughest challenges in the game. If you die during the raid, the credits will roll and you'll have to go back to a previous file for another attempt. You'll want to be sure to max out all your levels and stats, and that you are prepared with the Best Weapons and Best Clothing before attempting it.

To get through this gauntlet, you'll need to make your way through Arasaka Tower's main entrance, find an elevator, and then reach Mikoshi via the Netrunners Operations area.

It can be a good idea to practice with the Rogue Ending first to get familiar with the layout, as you'll pass through these same locations in this ending as well.

All Possible Endings and Results

NOTE: This section contains spoilers for the Secret Ending and other endings of the game.

After you've agreed to Johnny's plan, there will be three possible routes for how the Secret Ending will unfold.

These endings unfold in the same way as they do when the Secret Ending has not been chosen, with the major result of avoiding Rogue's death. Other than this point, the final result of the game is not significantly affected.

The Rewards for completing each possible ending for Don't Fear the Reaper seem to match those of the standard ending they are associated with.

Dying in Arasaka Tower leads to no rewards, like the Suicide Ending, while the Temperance Ending and The Sun Ending will each yield their associated rewards.

From a story perspective, it's still not the happiest ending regardless of your choice, but since this is the only route to reach The Sun Ending while still leaving Rogue alive, it's a necessary piece of the puzzle for players who are concerned with reaching 100% clear and getting every possible ending.

Post (1 Comments)
Opinions about an article or post go here.
Opinions about an article or post
We at Game8 thank you for your support.
In order for us to make the best articles possible, share your corrections, opinions, and thoughts about "How to Get the Secret Ending" with us!
When reporting a problem, please be as specific as possible in providing details such as what conditions the problem occurred under and what kind of effects it had.