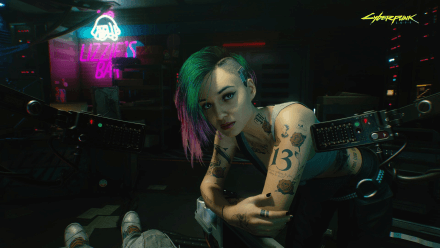 This is a guide on Judy Alvarez, a character in Cyberpunk 2077. Learn about how to romance Judy with our full romance guide, what Side Quests and choices are needed to romance Judy, and Judy's effect on the ending of the game.

How to Romance Judy

Judy Can Be Romanced 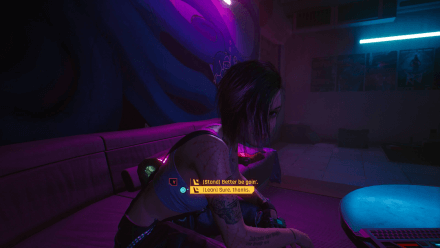 Judy is available as one of the Romance options, but only for Female V. If you're hoping to romance Judy, be sure to choose a female character at the start of the game, as this aspect cannot be changed at any time.

Does Judy Affect the Ending?

Affects the Star and Sun Endings

In the Star ending, if you romanced Judy as female V and call her during Nocturne OP55N1 then she will join you leaving Night City with Panam and the Aldecaldos. She will also still appear during the credits sending a message to V if you called her or not depending on your relationship when you finish the final quest. 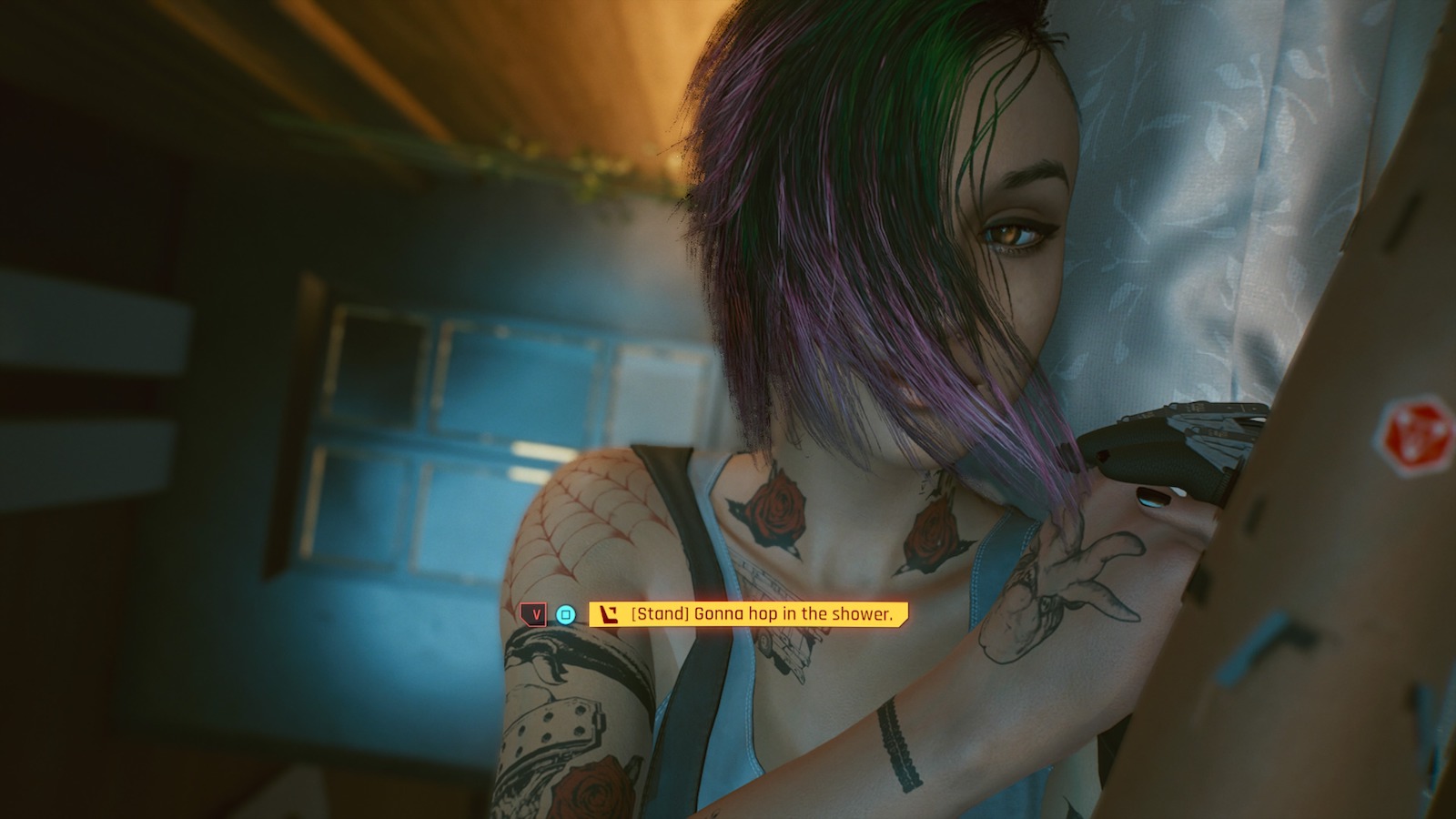 In the Sun ending, romancing and calling Judy will have her appear during Path Of Glory before V leaves for space. She will also send a message to V during the credits.

Judy Story and Side Quests

V meets Evelyn, the one who hired Dex DeShawn for the heist. Evelyn leads V to the downstairs of Lizzie's Bar where V meets Judy, who Evelyn calls the most talented braindance editor of Night City. Judy runs V through a trial braindance, then Evelyn's braindance of the heist target.

The Information Quest
Walkthrough and Rewards 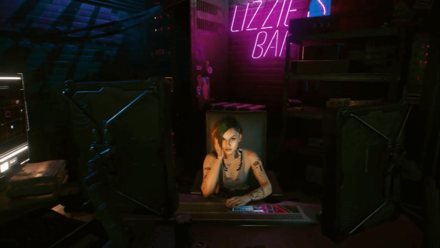 V finds Judy at Lizzie's Bar, while they were asking around about Evelyn. Judy reluctantly agrees and gives V a cigarette case with the address to Clouds, the club where Evelyn works.
Automatic Love Quest
Walkthrough and Rewards 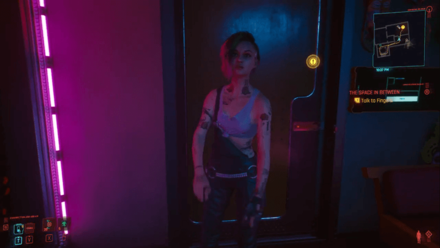 V learns that Evelyn was sent to a Ripperdoc for a Joytoy called Fingers, and Judy comes along to interrogate him. They learn that she got taken by Fingers' fixer.

The Space In Between Quest
Walkthrough and Rewards

The two find a rare snuff braindance, and use it to find the compound's location. They break into the compound and rescue Evelyn. Judy then extracts a braindance for her and gives it to V, giving V the next lead on the chase to find the solution to the Relic.
Disasterpiece Quest
Walkthrough and Rewards

Some time after rescuing Evelyn Judy will call V in a panic. Upon arriving at her apartment, V finds out that the trauma of Evelyn's experience was too much for her and chose to take her life instead. V comforts Judy before leaving.
Both Sides, Now Quest
Walkthrough and Rewards

After Evelyn's passing, Judy desires revenge. V joins Judy in attempting to convince Maiko, the unofficial manager of Clouds, to help them take down the Tyger Claws who run the dollhouse.
Ex-Factor Quest Walkthrough and Rewards 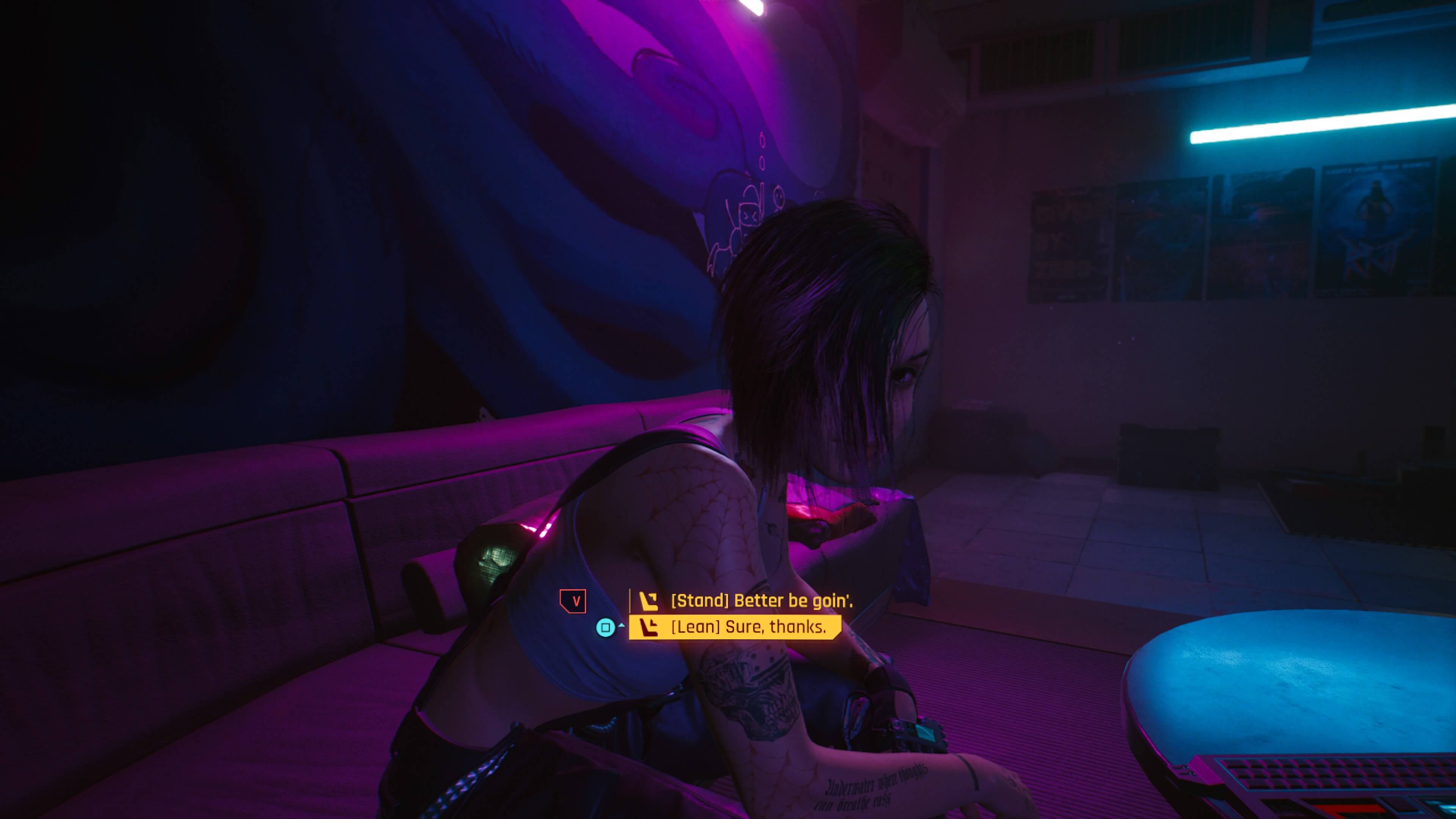 Judy invites V over with others from Clouds to go over a plan to rid Clouds of its abusive management. After the others leave, V spends some time with Judy and stays the night after a relic malfunction. During this time female V can also begin to romance Judy.
Talkin' 'Bout A Revolution Quest
Walkthrough and Rewards 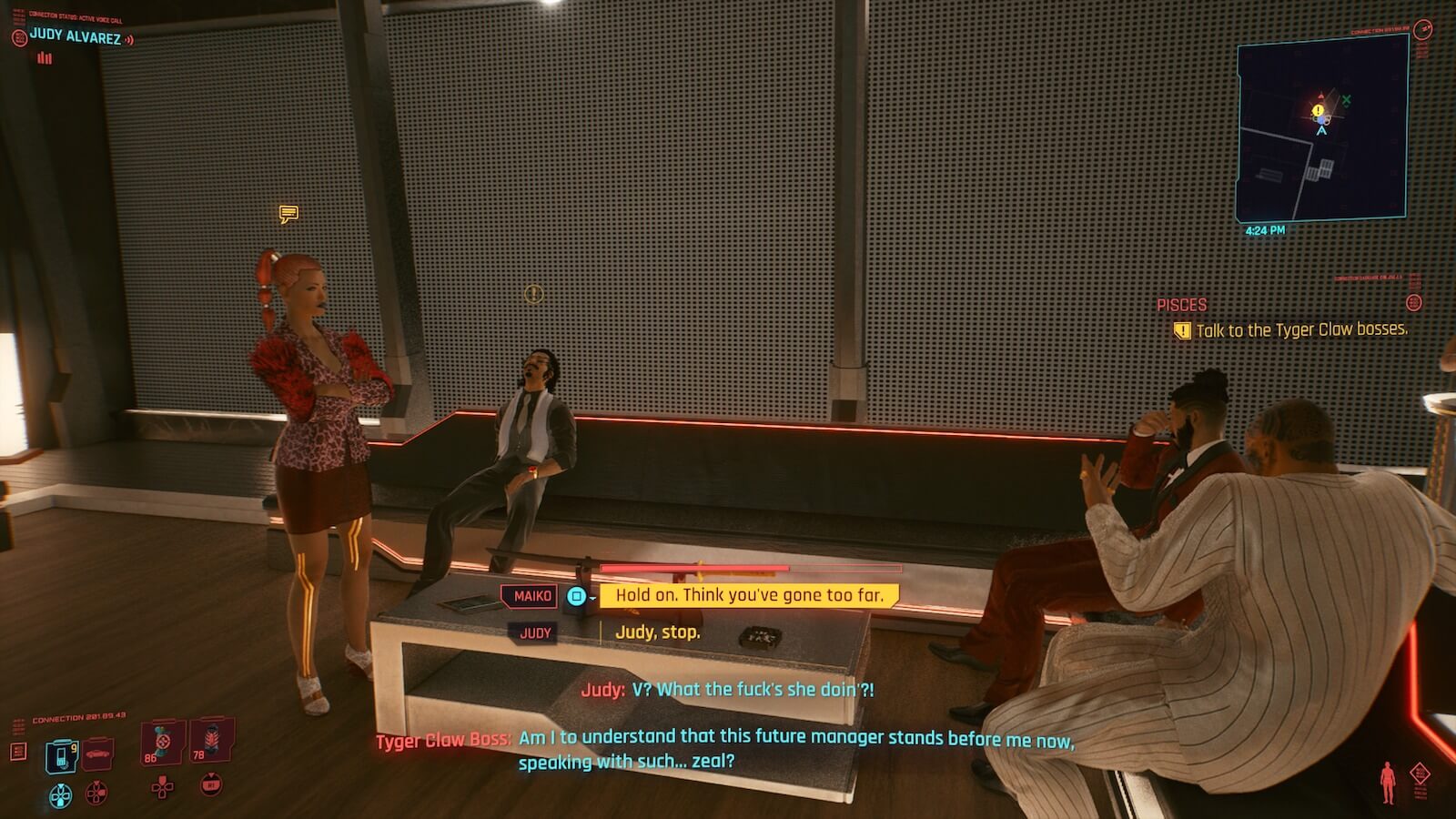 The day of the revolution arrives and V infiltrates Hiromi's penthouse with Maiko while the other dolls stage an attack on Clouds. Maiko reveals her true plan by attempting to take Hiromi's place, betraying the group. V chooses to side with Maiko and take her money or kill the bosses and Maiko. Following the plan keeps Judy on her side, resulting in a later invitation.
Pisces Quest Walkthrough and Rewards 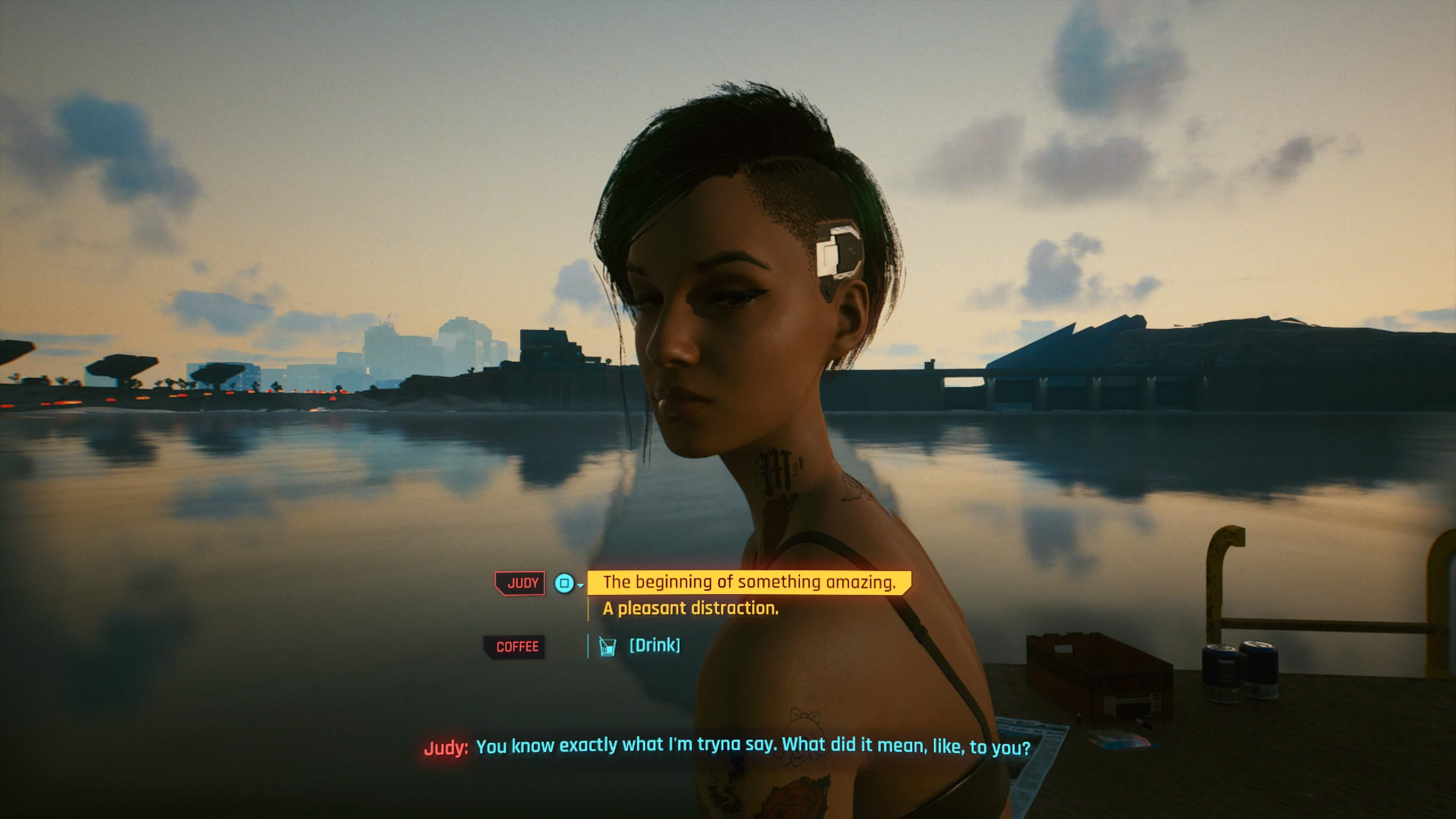 Judy takes V down into the flooded ruins of Laguna Bend, her hometown, to share her past and memories with them. After a relic malfunction renders V unconscious underwater, Judy rescues her. The two sepnt the night in the cabin. If female V had been romancing Judy up until this point, the two will stay together and can enter into a relationship the following morning.
Pyramid Song Quest
Walkthrough and Rewards

In order for us to make the best articles possible, share your corrections, opinions, and thoughts about 「Judy Alvarez: Romance Guide and Side Quests | Cyberpunk 2077」 with us!