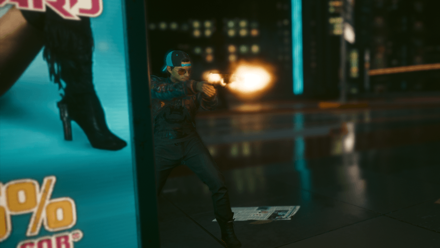 This is a guide to the Best Assassin Build for Cyberpunk 2077 Patch 1.6. Read our guide for details about the build, what attributes to level up, which perks to choose, and what weapons and cyberwares to use.

Assassins live and die by their stealth, which requires Cool, so it's best to level this first to stay sneaky. As you level up, you should put some points into Reflexes to improve the handling and effectiveness of your primary weapon, in this case, Handguns. Quickhacks help assassins immensely in staying undetected, making Intelligence the next attribute you should focus on.

For the remaining attributes, Body and Technical Ability can be leveled up as you like to either help with survivability or to gain access to more doors and crafting later on.

A lot of the perks in the Ninjutsu tree help with staying stealthy and increase damage while sneaking. However, some of the perks affect Throwing Knives, so not all perks will be needed in this tree.

The aptly named Assassin helps improve damage against humans, which you'll be targetting plenty of. Silent and Deadly as well as Strike From The Shadows both increase damage while sneaking. Sniper is also thrown in to make headshots more effective.

Handguns will be your primary means of killing, so you'll be using lots of perks from this tree. Taking perks like Rio Bravo and Desperado ensure headshots can kill in a single shot while Long Shot Drop Pop and Wild West improve your handguns at long range.

The perks in the Breach Protocol tree help with sneaking around areas undetected by disabling cameras and turrets with Big Sleep and Turret Shutdown.

Quickhacks can help isolate enemies or cripple them to make eliminating them easier. Perks like Signal Support, Diffusion, and Plague help spread the Reboot Optics quickhack, allowing you to sneak past enemies or kill them without knowing what hit them.

The Archangel is one of the more powerful handguns in the game. Putting a silencer on this is essential to staying undetected. As this is based on the Overture, you can also effectively use that revolver if you don't have this Iconic weapon yet.

The Doom Doom is highly effective with headshots thanks to its high damage. You'll need to be slightly closer to your targets though as its bullets can spread. Be sure to put a silencer on this revolver too.

How to Get the Doom Doom

Having a Cyberdeck comes in handy with staying stealthy thanks to its variety of quickhacks. This particular one makes it so the quickhacks spread quickly and recover RAM faster.

If quickhacks aren't your thing, using this Sandevistan can still be effective for stealth takedowns. The speed lets you move unseen past enemies and allows you to use takedowns.

For Arms, we're using the Monowire thanks to its higher single-hit damage over the Mantis Blades. This can come in handy for melee combat both when unseen or discovered.

The Optical Camo is great for moving around undetected as it makes you invisible. Use it to get behind enemy lines or escape when caught in combat before eliminating them with headshots.

The Reinforced Tendons enable double jumping, which is a valuable positioning move that lets you reach higher places, helping you get away or give you a better vantage point.

The Fortified Ankles can also be used to double jump but has stricter timing. Their main draw is the hover which allows you to cover distances that other Legs Cyberware can't do. Be sure to get the Epic version from Fingers MD.

The Synaptic Accelerator is useful for giving more leeway when detected. Its cooldown takes a while, so plan your next move wisely if this activates.

Short Circuit has a fairly low RAM requirement and should be your quickhack of choice against mechanical enemies. Against other enemies, this can still be used to lower their health enough to be killed with a headshot. With the Cyberdeck recommendation above, this can also spread to nearby enemies.

The Reboot Optics quickhack renders enemies blind, effectively making you invisible to them. At higher rarities, it has stronger effects such as spreading and lasting longer that you can abuse to take down groups of enemies undetected.

If Reboot Optics blinds foes, Sonic Shock deafens and silences them. This is highly useful for preventing enemies from being alerted of your presence. Higher rarities even cut them off from their network, isolating them from their group.

Whistle is fairly simple yet effective as it lures enemies to your position. This lets you pick off enemies while easily drawing away their corpses from their group to prevent alerting the other enemies of an intruder.

How to Play the Assassin Build 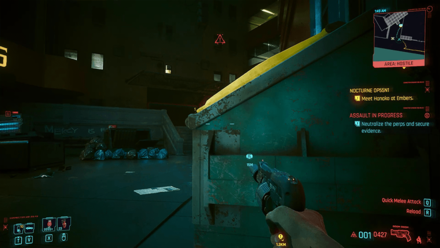 Assassins must remain stealthy to avoid detection and ending up in a chaotic fight. To do so, stay in the shadows by crouching and hiding behind objects or use cyberware like the Optical Camo. Once your enemies are in sight, use quickhacks to sneak past them or eliminate them quickly with headshots. 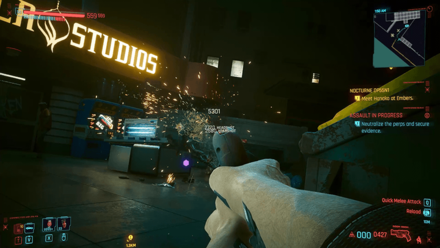 Headshots are key to dealing damage while in stealth. Several weapons have a headshot bonus which can be amplified further with the right perks, allowing you to take down enemies in one shot. Using silent revolvers, you can quickly dispatch foes without them noticing you're already there. 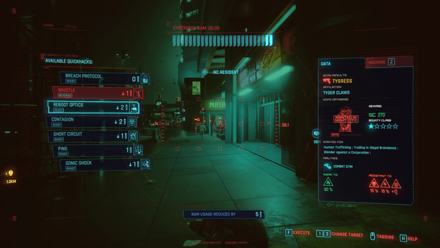 Assassins can also use quickhacks to their advantage to reduce their enemies' chances of fighting back by blinding and silencing them. Watch out for enemy netrunners when doing so. 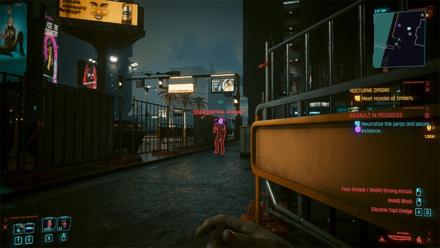 Most stealth builds rely on eliminating foes through headshots. Throwing Knives can also be effective for this playstyle thanks to making barely any noise and having a large headshot multiplier. This takes a bit more precision compared to using handguns but can be better at scoring large damage while having good synergy with Ninjutsu perks.

For this build, Cool and Intelligence are still important but Reflexes become less so. The ability to throw knives also requires the Dagger Dealer perk while knife cooldown can be managed with Juggler.

In order for us to make the best articles possible, share your corrections, opinions, and thoughts about 「Best Assassin Build for Patch 1.6 (Stealth Build) | Cyberpunk 2077」 with us!