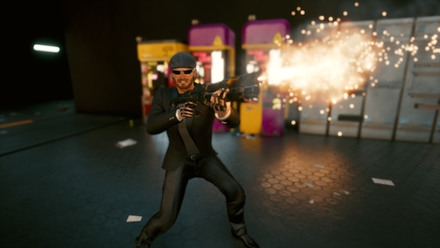 This is a guide to the Best Gunslinger Build for Cyberpunk 2077 Patch 1.6. Read our guide for details about the build, what attributes to level up, which perks to choose, and what weapons and cyberwares to use.

We're primarily focusing on Body to take advantage of perks from both the Annihilation and Athletics trees. This improves both our Shotgun handling and survivability, making it a must to level. Technical Ability comes second as this lets us craft Legendary equipment to maximize the build's effectiveness. Cool is added for the Cold Blood bonuses while Reflexes allows for faster movement during combat.

Annihilation gives several bonuses that improve the damage output and handling of Shotguns. Basic damage skills such as Hail of Bullets and Massacre help make sure your targets stay down after one hit while Pump It, Louder! and In Your Face make Shotguns easier to use by reducing recoil and reload time.

Since using a Shotgun needs you to get closer to your enemies, you'll need to survive multiple hits to avoid flatlining. Reduce incoming damage with perks such as Indestructible and Steel Shell then add Regeneration and Dog of War to effectively increase how much Health you have while in combat.

Edgerunner Artisan is a must to craft Legendary weapons to make your Shotguns the best they can be. Adding skills like Cutting Edge only makes them better.

Cold Blood gives several stat boosts to make you a force to be reckoned with against groups of enemies. Take perks like Easy Out and Icy Veins to boost your DPS then make Cold Blood more effective by extending it with Coolagulant and Coldest Blood.

The Sovereign might only have two shots, but it makes up for it with its fast reload speed. You can choose to fire one round at a time normally or unload both shots by aiming to ensure your foes won't be bothering you anymore. Stacking reload buffs will make it reload pretty fast even with a Sandevistan active.

How to Get the Sovereign

A strong shotgun with a wide bullet spread and high damage. This version of the M2038 Tactician exchanges ammo capacity for double the projectiles, making it a very deadly weapon. Use The Headsman to clear out your targets with ease.

How to Get the The Headsman

Rebecca's Guts arrives in Patch 1.6 and proves to be a contender for a good Shotgun. You can even negate fall damage with this weapon! You'll have to watch out for the massive recoil when using it though.

How to Get the Guts

By slowing down time, you can easily reposition yourself and aim better with a Shotgun. Watch out for the recoil while the Sandevistan is active as you won't be able to fire shots in quick succession unless you've taken measures to reduce it.

Berserk buffs can come in handy for gunslingers using Shotguns thanks to reducing recoil and buffing defense. The bonus to ranged attacks is also appreciated.

Unlike most ranged weapons, you'll tend to get closer to your foes when using a Shotgun. Using the Gorilla Arms should prove useful if you can't reload your gun and have to knock your enemies out.

The Kerenzikov shows its worth by allowing you to reposition and gain an advantage by slowing down time.

Heal-On-Kill is a great cyberware for making it through your enemies' attacks by taking them out. This lets you be more aggressive as it reduces the need to heal up with items.

Reducing all forms of damage is a great way to make sure you don't flatline, especially if you're getting up close to enemies to shoot them.

Shotguns are known for their heavy recoil, so anything to reduce it should be considered.

How to Play the Gunslinger Build

Blast Enemies in One Shot

Shotguns have a limited clip, so you'll want every round to kill in one shot as much as possible. Use headshots, torso hits with Dead Center, and crits to your advantage to ensure they won't be fighting back. You'll also want to have Cold Blood active to make eliminating your foes a breeze.

Slow Down Time When Necessary

Since you'll be shooting foes up close as a gunslinger, you'll want to use tools that can help you reposition easily by slowing down time. Use the Sandevistan or Kerenzikov to move around in slowed time to either get to safety or just blast everyone before they realize what hit them.

In order for us to make the best articles possible, share your corrections, opinions, and thoughts about 「Best Gunslinger Build for Patch 1.6 | Cyberpunk 2077」 with us!