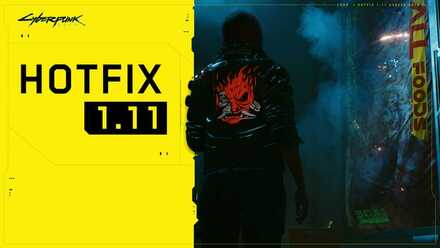 This page has the patch notes and all details of fixes included in Patch 1.11 for Cyberpunk 2077. See if the bug you have been experiencing has been fixed in Patch 1.11!

Patch 1.11 was mainly released to fix the bug added in Patch 1.1, which prevented players from progressing the game during the Down on the Street Quest. After severe backlash from players, CDPR rushed to release a new Patch resolving the issue.

Many players have noted continued issues with AI behavior after Patch 1.1's release, but these issues were not addressed in the new Update. It's possible that these issues will require a longer span to resolve and may be included in Patch 1.2.

The Patch Notes specifically note that “the save/load loot exploit will be investigated further.” This implies that the Money Farming Glitch in the I Walk the Line Quest will be resolved in a future Patch, so players who want to take advantage of this highly lucrative bug should do so now, or hold off on future updates to be safe.

In order for us to make the best articles possible, share your corrections, opinions, and thoughts about 「Patch 1.11 (Update 1.11) | Patch Notes and Release Date | Cyberpunk 2077」 with us!