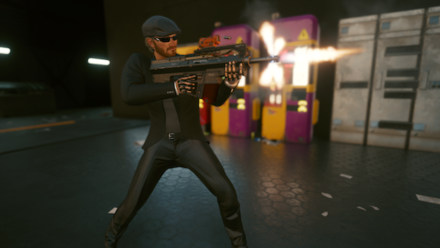 This is a guide to the Best Assault Rifle Build for Cyberpunk 2077 Patch 1.6. Read our guide for details about the build, what attributes to level up, which perks to choose, and what weapons and cyberwares to use.

Assault Rifles require Body and Reflexes to be effective. As you'll likely be exposed while firing, survivability is needed by getting perks from the Athletics skill tree while weapon effectiveness improves with Assault perks. Technical Ability is also added in for the ability to craft Legendary weapons later in the game while improving Armor.

Assault Perks help improve the handling and damage of Assault Rifles. Skills like Shoot, Reload, Repeat and Feel the Flow make reloads faster, so you'll have more time shooting. Damage skills like Bulletjock and Savage Stoic are also recommended for mowing down your enemies quickly.

Athletics lets you survive taking multiple hits so you can return fire without worrying about flatlining. Perks such as Indestructible and Steel Shell will reduce damage while Regeneration and related skills like Dog of War effectively increase how much Health you have while in combat.

Edgerunner Artisan is a must to craft Legendary weapons to make your Assault Rifles the best they can be. Adding skills like Cutting Edge only makes them better.

This weapon gives the phrase 'Light 'em up' new meaning by setting your enemies ablaze! This Assault Rifle packs enough firepower (and fire) to wipe out your enemies while letting any survivors burn to a crisp.

Defy your enemies like a Spartan with this Assault Rifle. Morons who dare to challenge this weapon's user will sooner find themselves filled with bullets thanks to its increased firing rate. If they're really unlucky, their body parts might just come off.

How to Get the Moron Labe

Our pick for a Smart Weapon is the Divided We Stand. Even in an Assault Rifle build, it's useful for its automated targeting system and the fact that it can hit five targets at once.

How to Get the Divided We Stand

Berserk is useful for Assault Rifle users thanks to its recoil reduction and armor improvements. The Biodyne Berserk is our top choice for the Operating System as it also improves ranged damage while active.

A Sandevistan can also be used for a more offensive style as time can be slowed while increasing the damage dealt. Do note that your reload speed is also affected by slowed time, so make sure you've got enough bullets ready before activating it.

The Projectile Launch System can serve as a handy backup in case you run out of rifle ammo or can't reload on the fly.

This is a fantastic cyberware for survivability, requiring less time for healing if you can take down multiple enemies successively.

More Armor means less damage taken while in a shootout. Equip this to supplement your defenses.

This can effectively give you a second chance if your Health drops too low. Make sure to use it well, as the long cooldown could mean you'll flatline if you mess up again.

Assault Rifles tend to have heavy recoil, so reducing it as much as possible is necessary to keep your aim straight.

How to Play the Assault Rifle Build

The bonuses provided by the Biodyne Berserk are worth using as much as possible. Make the most of your enhanced stats by eliminating as many targets as you can before it expires.

Keep Your Health Up

As you're more than likely to end up in a firefight with an Assault Rifle, you'll have to make sure your enemies go out before you do. Take advantage of cover to heal up and reload safely, and equip cyberware and perks that reduce damage and help regen Health when you're open firing.

Watch Out for Recoil and Reload Times

Recoil affects how much your aim moves about every time you shoot, so reducing this can help make your firing more steady, leading to more accurate hits. Reload time is also a concern for Assault Rifles since they take a while longer than other weapons. Thankfully, perks can reduce this, so you can improve your DPS by firing more often.

In order for us to make the best articles possible, share your corrections, opinions, and thoughts about 「Best Assault Rifle Build for Patch 1.6 | Cyberpunk 2077」 with us!