How to Avoid Being Hacked (Overheating) | All Enemy Quickhacks | Cyberpunk 2077 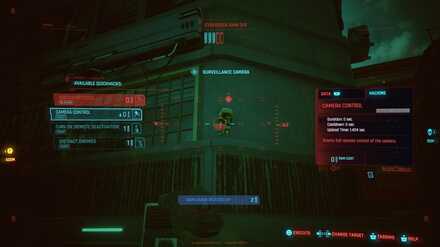 How to Avoid Being Hacked

When an enemy hacker attempts to hack you, a loading bar will appear on the screen, showing how close the Hack is to being uploaded and taking effect. When this happens, don't panic! Follow the three easy steps below to avoid letting the Hack take effect. 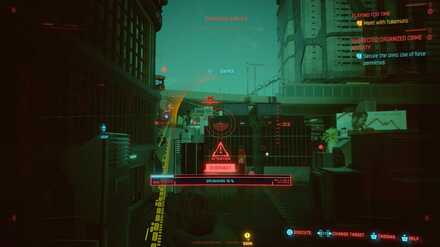 In order to identify the enemy hacking you, you'll want to switch into Scan Mode (L1 on PS4, Tab/Caps Lock on PC) and survey the environment. Look around until you find a yellow rope-like line as shown in the picture above. This line connects you to your Hacker, be they close or far away.

When you are in the middle of scanning an enemy in Scan Mode, time will slow down, so this will provide a chance to evaluate the situation as well.

Now that you've identified your hacker, you'll want to determine the next step in taking them down. 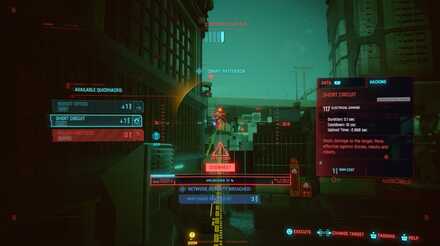 If the enemy is visible and not obscured by walls, you'll be able to Quickhack them directly. Using a damaging Quickhack like Short Circuit is best.

Any attack to the enemy will interrupt the Hack, but Quickhacks are the easiest way, as hackers are usually far away and Quickhacks will allow you to hit without worrying about accuracy. 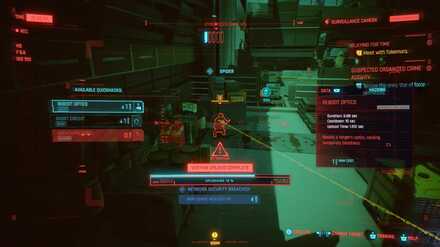 If the enemy is obscured by a wall, your situation is a bit more difficult. Trying to move around to get a direct line of sight on the hacker will usually take too long.

Your best solution is to try to use Camera Control on a nearby camera. This will give you access to the complete camera network, and by switching between the different cameras, you'll likely be able to find the hacker, who will still be shown together with the yellow hacking line. From here, use a damaging Quickhack like Short Circuit to interrupt the attack remotely. 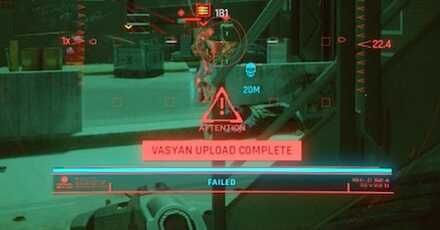 Any method of attack will work, but as long as you can get a hit in on the hacker, the Hack will Fail as shown above. Pay attention to your surroundings and Quickhack back, and you'll never fear from an enemy netrunner!

Fortunately, enemies don't have access to all the powerful Quickhacks available to the player. Hacks used by enemies tend to deal more minor damage, but are still a nuisance. Be familiar with them before you face them in combat.

This Hack inflicts the Burn status on the player, causing damage for several seconds. It can typically be weathered with a Maxdoc Mk.1.

This Hack seems to be similar to Overheat, inflicting the Burn status, but dealing slightly more damage.

In order for us to make the best articles possible, share your corrections, opinions, and thoughts about 「How to Avoid Being Hacked (Overheating) | All Enemy Quickhacks | Cyberpunk 2077」 with us!